Welcome! Well, we're trying a somewhat different format with this review...a little more factual information about the toys being reviewed and a little more organized layout. I'd like to give some big thanks to Sentinel from Joe Sightings for pitching in this month and getting these reviews done for me! He whipped up a fantastic format for these items, and has some pretty good opinions as well. 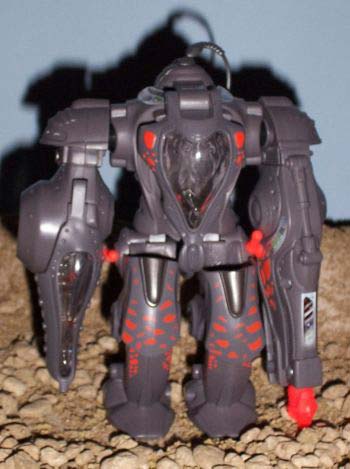 COBRA’s forces have always appeared to be on the forefront of technological innovation. From the advanced H.I.S.S. (High Speed Sentry) tanks to the spacefaring Stellar Stilettos, COBRA’s troops and weapons have pushed the limits of modern science, invention, ethics, and, at times, believability. In 2004, COBRA (well, Hasbro, actually—they are toys after all) has broken new ground and stirred new controversy with the creation of biomechanical vehicles that combine animal genetics with advanced technology to create “dangerously superior battle system[s].” The first of these vehicles is the scorpion DNA-enhanced COBRA Pulverizer.

As with the G.I. Joe Defense Mech (see separate review), the COBRA Pulverizer is a 6-inch-tall power suit with an electronic “laser” weapon and missile launcher. The vehicle is molded and/or painted in gray with orange highlights. Unlike the Defense Mech, however, the Pulverizer appears less mechanical and more organic—which is fitting considering the Valor vs. Venom theme. It also features fewer details—those it does have include cables, wires, molded hydraulics, organic “bumps,” a serrated “claw,” and a mechanical “spine.” The vehicle’s canopy can be opened to place a figure in the cockpit (which includes a clip to hold the figure in place), and shields on the legs can be slid up to better protect the driver. In addition, the Pulverizer’s arms can be popped off and swapped with the arms from the Defense Mech.

The COBRA Pulverizer also has fewer points of articulation than the Defense Mech—motion is limited to the shoulders and upper legs. Although it could be viewed as a negative, it also makes the Pulverizer a more solid toy and less prone to breakage (the canopy is still a potential weak point, however).

Like most recent vehicles, the COBRA Pulverizer is a battery-operated electronic toy. A button located on the mech’s right arm opens its “claw” and activates a red LED light and battle sounds. The sounds, which include two “laser” weapon settings and a pulse charge, are futuristic and fit the overall feel of the vehicle perfectly.

The Pulverizer comes with a new COBRA mercenary named Ghost Bear. Fans of the original G.I. Joe comic from Marvel will recognize Ghost Bear’s father as Kwinn, the Eskimo mercenary who was betrayed by COBRA and killed by Dr. Venom (see G.I. Joe, volume 1, numbers 2 and 19 for the first and last appearances of Kwinn). According to his file card, Ghost Bear holds a grudge against the G.I. Joe team (especially Snake Eyes) for his father’s death. It’ll be interesting to see whether this story is played out in any of the upcoming mini-comics or videos.

As with the Pulverizer, Ghost Bear is predominantly gray with orange highlights, and his straps, belts, pouches, gloves, and boots are mostly black. His face is masked and his eyes are protected by silver goggles with red lenses. His hair is orange and spiky, almost anime in style. Some collectors may complain about an Eskimo having orange hair, but is it really that far-fetched that he’d color and spike it? I think it adds a little personality to his otherwise mysterious appearance. My only complaint, however, is that his hair looks too much like the top of a pineapple—I’m not sure whether it’s due to the sculpting or whether the paint application makes the hair look bulkier than it actually is.

Ghost Bear comes with removable straps and a gray knife. The knife is very small and could be lost easily. Overall, both the figure and his accessories are well sculpted.

Although not quite as cool as the Defense Mech, the COBRA Pulverizer w/ Ghost Bear is still a solid, fun toy that’s cheap and easy to army build. Look for it on store shelves now. --Sentinel

Now here are some pics that Sentinel took for the review as well: 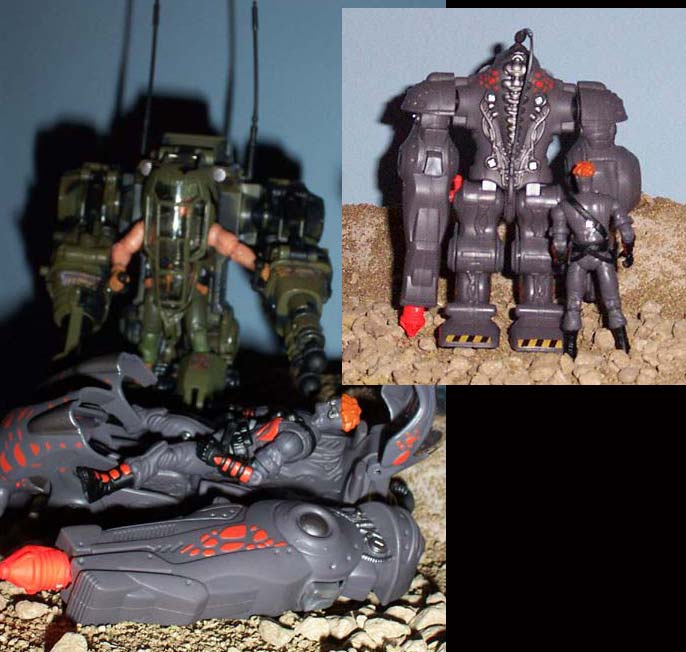 Now, what are my thoughts?

I think Sentinel hit on most of the asthetic points with his review- the comparison between the Defense Mech's strict mechanical look and the Pulverizer's more organic mold, is probably the most glaring difference. Articulation is a slight negative for me, too. The Pulverizer ends up feeling somewhat large and clunky, and just not like a real offensive weapon for COBRA. It feels like it would be slow and clumsy, and pretty vulnerable to faster moving mini-vehicles. The mech itself leaves me a little flat.

But--this is all made up for by the figure! When I first heard that Ghost Bear was set to be Kwinn's son, I was quite excited, even though he didn't really have the "look" of an Eskimo offspring. However, I can easily see how a strict father-son relationship would melt away once the father figure is taken out of the picture. The son rebels- does things his father wouldn't have approved of, and then takes up what he thinks was Kwinn's battle. It works for me.

The mold itself is terrific as well, nice and in proportion with a lot of cool details and nice color combinations. The mold and colors actually led me to integrate Ghost Bear into the COBRA organization much more easily. When he approaches the Commander for a job with COBRA ,he's originally turned down, with COBRA Commander afraid that his father's unwavering sense of honor might have passed down to his son. But Firefly sees some potential, and takes him under his wing. He flourishes, and is now Firefly's proteje, and incredibly skilled sabatour and assassin, using his marksmanship skills to their utmost. I find myself liking this character a lot.

But Sentinel said most of it for me...so I'll just leave the review with some of my pictures. 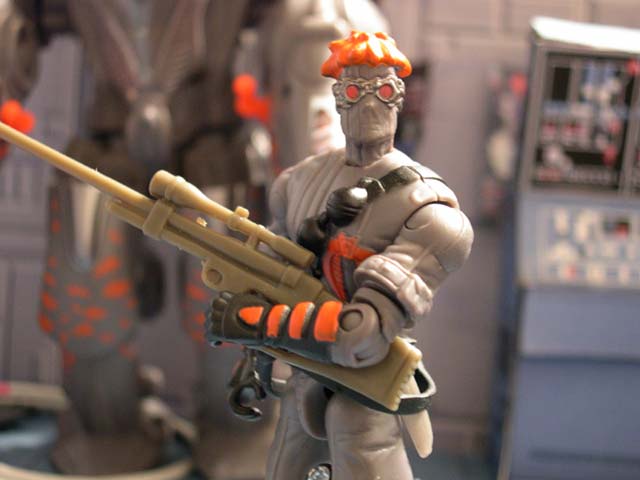 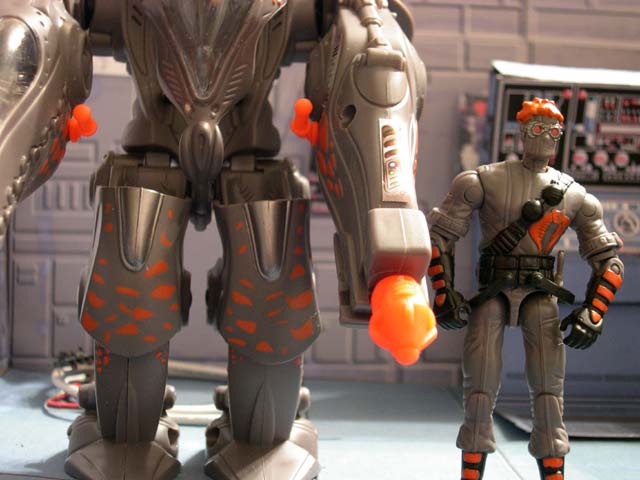 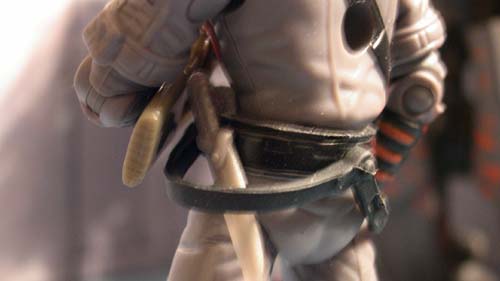 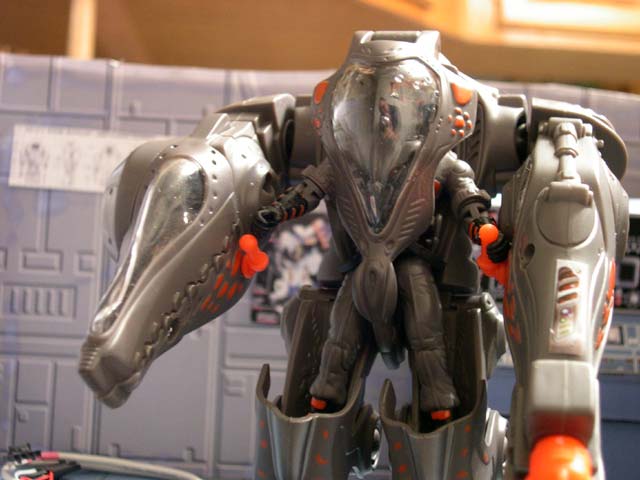 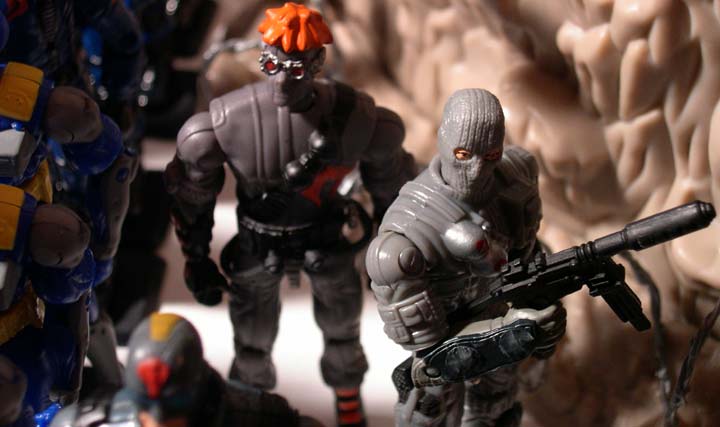