Anyone who knows me, knows I don't use the water vehicles a whole lot. I've got about as much use for a G.i. Joe boat as I do...well...a G.I. Joe space ship.

All right, I'm exaggerating. But the truth is, I'm not big on the whole water adventure portion of the Joe adventures. The guys in permenant wetsuits get no love from me, and don't go on many missions dressed like that. But even a boat hater like myself has some respect for a decent vehicle when I see it. 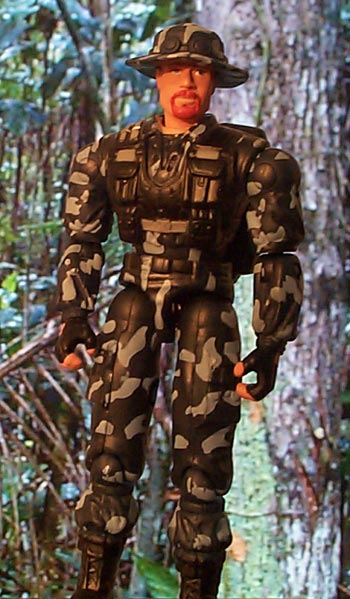 I saw the Piranha at the same time I saw the Night Adder pictures online, and well, I was much more impressed with the COBRA plane than the G.I. Joe boat that I would likely never use. Oh, I understand that the Earth is 3/4 water, and there's very few missions our Joes could go on that wouldn't involve swimming, floating, or submersing, but boats just haven't really ever been my thing.

As such, the Night Adder impressed me, the Piranha, not so much. Now that I've got them in hand, though, I've found that my opinions have pretty much flip-flopped. The Night Adder, while pretty neat, didn't make a huge impact on me. The Piranha, on the other hand, is really making me a boat believer.

Let's face it, throughout the years, we never really had a jungle patrol/insertion boat. The WHALE certainly doesn't qualify, and most others were single person attack crafts and not really "boats". This baby is a partol boat, plain and simple, and is going to be the primary way my jungle teams are inserted into enemy territory these days.

First of all, Hasbro has seemingly done the unthinkable with this one. They created a realistic boat that is still cool as heck to look at and has some great play value. It's hull is a realistic hull shape, and it looks, well, like a boat should.

It's not overly small, nor overly large, it's just a nice, mid-sized boat which can hold half a dozen troops if necessary, or can patrol the rivers and exchange fire with smugglers effectively.

The boats sleekness is broken up slightly by the driver's cage on the back, which encloses the person at the helm, but also adds some nice design touches to the watercraft. The cage flows up and over the driver nicely, and also conceals the Action Attack fairly convincingly, even though the execution of said Action Attack isn't so hot.

To add another little flair, there are two whip antennas on the top of the cage, which look great, and make sense, as I'm sure a long range radio would be necessary on trips into the Amazon with this bad boy. Another place this boat excels is the gun stations on the front. There seems to be a lot of confusion in regards to these three weapons (they come packaged with the footpegs at the front of the gun barrels, which doesn't make much sense). Thanks to Recondo for pointing out, though, that there are multiple swivel points on these gunmounts. The platforms themselves swivel, but so do the posts just above the platforms. A few twists, and the gun barrels will be pointing the correct way in no time.

Speaking of gun barrels, there's just something about the triangular shape of these guns that I just dig. It adds some punch and these heavy machine guns look downright deadly like this. I can see this thing just pounding through a COBRA water patrol, with those three guns blazing, and tearing through enemy troops like they were nothing. It adds a nice Joe-specific edge to what would be a simple weapon, and i really like the impact it has. It looks different, but very cool.

Possibly the coolest thing about this boat, though, is it's actual ability to not only float, but to use it's powered motor to transport through the water! The batteries do weigh it down a little, and it does get difficult to make it maintain it's balance, but it's a very cool little touch that I would love to have a kid test out, if I had one. :) Sure, because of this feature, they had to oversize the rear engine a little, but it still looks fine to me, and the boat actually looks even neater because of it, in my twisted little mind. 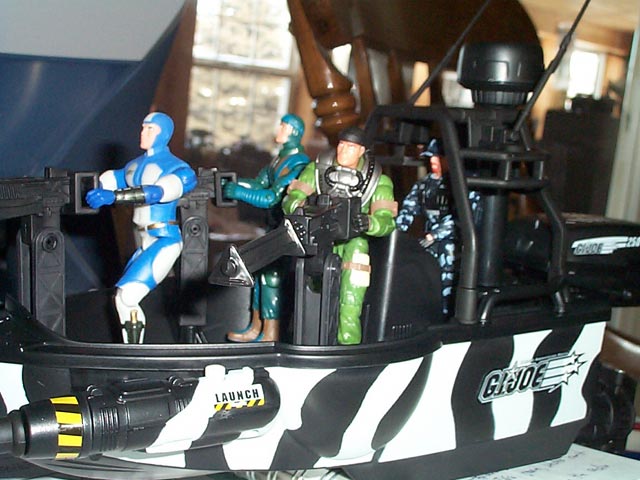 So overall, we have a neat little patrol boat/insertion craft that has practically made me a believe of G.I. Joe water operations. Not only that, but we get a very, VERY cool new navy based figure as part of the deal, too.

Now, no one is fooled. There is no way this figure was originally meant to be Shipwreck. I just don't see it. Not only is the hair color wrong, but the face sculpt is incorrect as well. A lot of people have taken to calling this guy Cutter, but I'm not wild about that either. Cutter doesn't seem like a goatee kinda guy to me, nor does he seem the type to don jungle cammies and get down and dirty. I can see him at sea, or chasing down drug smugglers in his DEF uniform, but not in the jungle camouflage.

I really think that this figure might have been meant to be Muskrat. It would make sense, as a swamp boat, or because he has a boonie cap...and the hair color is similar. But as it is, who knows for sure? I was very excited originally...I planned to immediately take off the head that was on this figure, replace it with a Wave 1 Wet Suit head, and FINALLY have my jungle ops Wet Suit that I've been waiting for since Special Missions first came out. But, unfortunately the Wave 1 Wet Suit head is simply too large to fit in, and kinda looks like crap, anyway. :( As it is, I might just pretend ole WS grew some facial fuzz, and this is him, in his jungle ops glory. If only Hasbro had kept off the goatee and called him Wet Suit, a LOT of longtime Joe fans would have been very happy.

Still, regardless of who it is, the figure is excellent. He maintains a very military-like theme, with the basic jungle BDU, underneath a nicely detailed flak vest. He's got a few pouches here and there, but in the case of this figure, less is more. His lack of an overabundance of patches, belts, and pockets makes him sleeker and better suited to fast-moving jungle operations. Throw the boonie cap and the fingerless gloves on him, and he makes a terrific land-based Navy SEAL...but has faithful as I usually am to Hasbro characters...this is not and never will be Shipwreck to me. Just doesn't have that feel.

Overall, this boat is definitely worth the investment, even if you're a boat hater like me. :) Overlook the large engine...overlook the incorrectly named figure and get a decent military-themed vehicle/figure set. These days, that's a very rare find in a G.I. Joe package!! 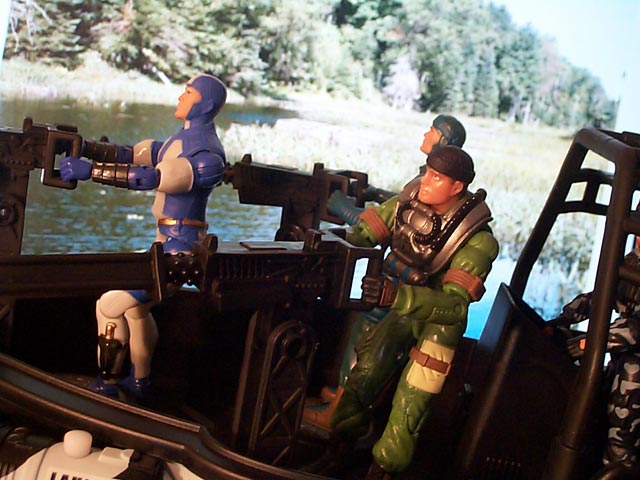 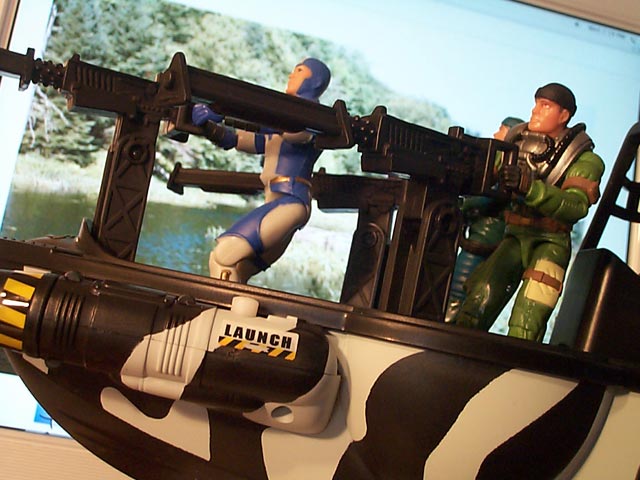 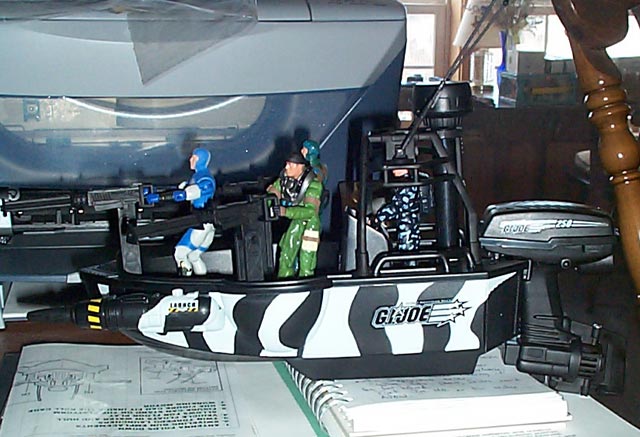