UPDATE-- Something I was not aware of and that several people pointed out to me regarding the Night Adder's wingtips- They extend!! I had absolutely no idea, and this small extension of the wings makes a HUGE difference. Any complaint I make about "stubby wings" from here on out is null and void. :) Next time I'll read the instructions before I post my review, and thanks to everyone who pointed this out to me (without making me feel stupid, no less... ;) )!!

Now, onto the review--

Well...where to start with this one?

We all first saw the pics of the Night Adder late last year, and most replies to it seemed very, VERY positive, myself included. We haven't gotten a credible COBRA airplane in quite some time (no, that pink and gold Rattler does NOT count) so it's nice to see us getting some support craft for our poor outmanned ground troops. 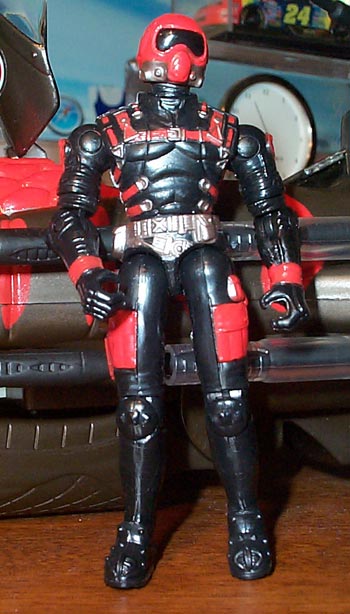 And support craft that actually looked pretty cool, to boot. But as we all know, pictures only tell a part of the story...how is this thing in person?

Let's face it...the first complaint anyone is going to have about this aircraft is that it's not "realistic". It's got tiny wings and stablizers...an overly long fuselage and just too whacked out a design. But, in my opinion, that's really what COBRA is all about and this plane fits in pretty nicely with the rest of the Snake crew's air arsenal.

First thing you have to notice about this plane is the overall shape. It is a sleek, slender, and quick looking aircraft, much along the lines of the COBRA Stellar Stilleto that came out in 1988. The nose is long and angled, and the wings are tiny, almost seeming unuseable. But thank goodness for imagination. :)

Personally, I like the shape. Sure, it's pretty unrealistic, but this is about impact. One of COBRA's primary weapons is fear and surprise. Can you imagine the thoughts running through someone's head as a dozen of these sleek little snake-rockets come screaming through the air? these things, to me, are like the TIE fighters of the Star Wars universe. Small, very light armored, quick strike craft that tear into the scene, blast away with their quad-cannons, and then scream back off into the sky. They are not built for one on one combat with a Skystriker, but are meant to swarm, fight, and run. For that purpose, these planes shine.

The snake motif on this particular aircraft is also impeccably done, I think. The nose is pointed and angled as it should be, as the nosecone of a plane, yet those malevolant eyes and scales make it immediately obvious that this is a COBRA aircraft. 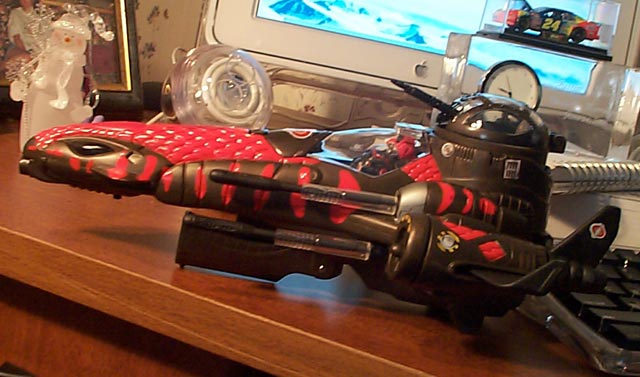 Alongside the overall shape and snake-look comes the intricate detailing of this attack craft. The scales are molded well onto the body of the plane, and are put in such places to add a nice flair without overdoing it. Where there aren't scales, there are metallic armored plates and mechanics, all looking very realistic despite being on a flying snake. The wings are especially nicely sculpted, and even though they look small and almost non-functional, they add a lot to the overall look of the plane, especially with those four stablizers added. The canopy/cockpit area looks very cool as well. With a low seat, Wild Weasel slips right in, and the two angled joysticks look right in place, and easy for him to reach.

But the coolest thing about this aircraft is the weapon assortment. It sports four high powered repeating cannons, two on each side of the canopy, as well as the enclosed armored gun-station with twin machine guns. Ever since the Rattler, I've loved this little addition to an attack plane, and it makes sense. Even has the planes are screaming by, the gunpods swivel and launch their own assault, with twin cannons that look especially dangerous. I LOVE the gunpod.

But, this plane is, of course, not perfect. While the short wings add to the sleek look of the aircraft, they're almost TOO small. I really don't see how wings of this nature could possibly keep a plane airborne. With some suspension of disbelief, though, I suppose it's not too bad. But then you come to the Action Attack. AA for the vehicles these days has been hit or miss. On this one, it's a miss. First of all, the noise is obnoxious...secondly, the oversized handle you must fold down to use the AA is very unwieldly and looks terrible, even when folded up. It's got some serious undercarraige junk which just isn't too pretty. Not only that, but when activated, instead of some sort of realistic weapon movement, you get an siezure-like spasming of the gun pod, which just whips around uncontrollably. I don't see how anyone could hit the broad side of a barn when the pod is flopping around like that. Yipes. But all is FAR from lost on the Night Adder--

--the crowning achievement of this little COBRA plane is, without a doubt, the Wild Weasel figure. We've gotten a couple of WW's since the line's relaunch in '02, and neither of them have done the character justice. One was a remold of a non-O-ring Wave 1 figure (and had lego knobs...) and the other was just...well, too disturbing to mention (see the reference to the pink and gold Rattler above--). With this Wild Weasel, COBRA's most famous pilot finally gets his due. This figure is incredible.

First, the downside. He suffers slightly from the short torso-long legs syndrome of Wave 7, but thankfully it's not nearly as extreme, and that entire proportion problem certainly appears to be fading away. But everything else about this figure is perfect. His black leather flightsuit is molded and painted to look like it should, and is adorned with lots of nice little details. A rubberized, padded torso underneath a great assortment of straps combine with belts and buckles, which only lead to more belts and buckles. His shoulders and shoes both have very nice molded COBRA sigil's embossed on them, which is a GREAT touch. I'm actually really liking how Hasbro doesn't just paint the symbol on any more...they actually engrave it into the figure's mold somewhere. Pretty cool.

He's got nicely molded kneepads and elbowpads, and those shoes are just too cool for words. Not only are they COBRA-ized, but they're big and bulky and look...well...just neat.

The crowning achievement of this entire figure, though, really has to be the helmet. It's the helmet that makes Wild Weasel stand out. His classic helmet is very distinctive, and while it's overall design should be maintained, I'm very glad they streamlined it, thinned it down, and modernized it. It's still a nice bright red, with the familiar shaped black goggles, but it's much smaller and a whole lot cooler looking. I actually like this Wild Weasel more than the original...he's that cool.

So, basically, once you get over a few minor faults with the plane- snubby wings, unrealistic design, strange Action Attack feature, and that obnoxious handle; you get a nice little fast attack craft that screams "COBRA" and a terrific rendition of COBRA's premier pilot. To me, a purchase of this item is a no-brainer...pick it up when you find it! 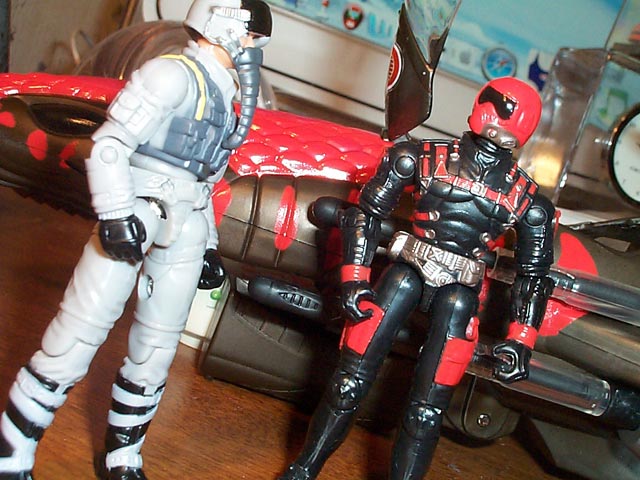 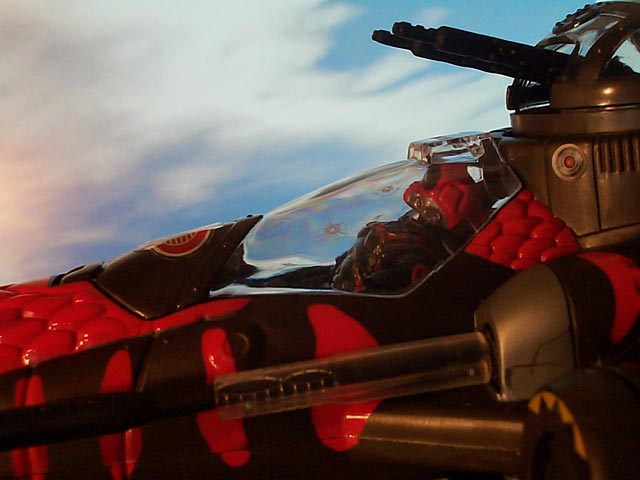 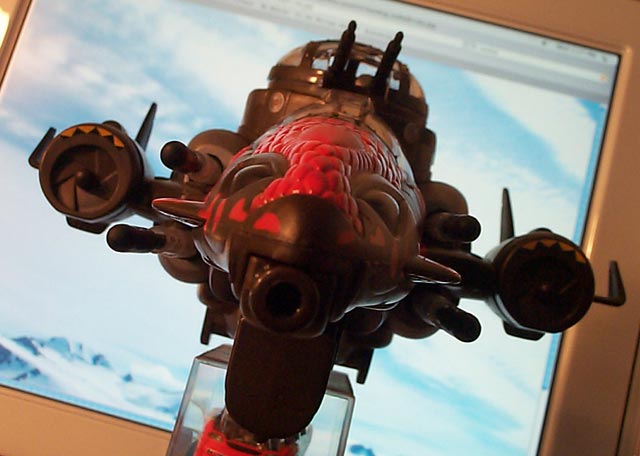 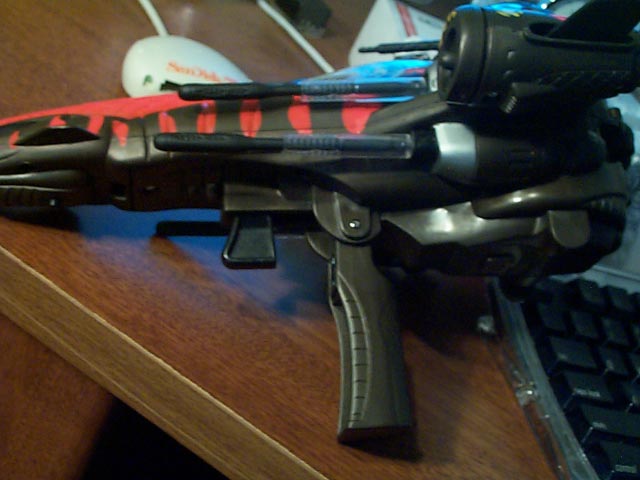 Is that a handle in your fuselage, or are you just happy to see me?