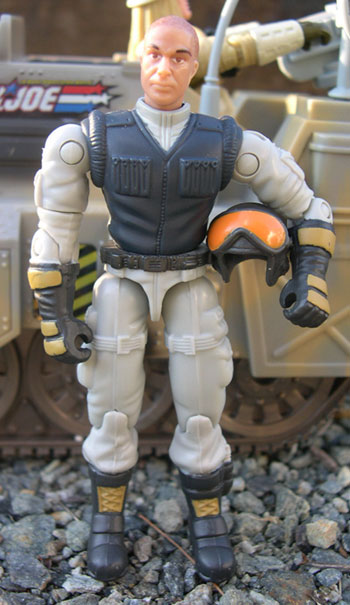 Hasbro's had some problems getting their Joe vehicles in order, especially in the Alpha class. While the Defense Mech and Tigerhawk were both very cool, every time Hasbro attempts to make a tank/artillery type vehicle, they seem to run into some problems.

The Neutralizer has shown some drastic improvement in the design team's mentallity, but still has a ways to go before they iron out all of the conflicted things going on with these vehicles.

Design is really where this vehicle suffers. Hasbro seems determined to cram as much stuff into as small a space as possible rather than focus on a central design schematic.

Here, they take a small vehicle and try to make it an all purpose attack battle tank. They've crammed so many weapons onto this thing that there isn't room for any drivers and it ends up looking somewhat rediculous. But...still...compared to the Battle Blitz and Road Rebel, this is a great improvement.

Standing on it's own merits, the Neutralizer isn't all bad. A chief complaint from many Joe fans is the "Tonka" look of the vehicles. Large, blocky designs with rounded corners and unrealistic designs. The Neutralizer at least as some cool angled pieces and a lot of realistic detailing. The overall shape is pretty sleek and packed with power. The treads work well in this design scheme and carry the look of the vehicle well.

Another high point of the Neutralizer is the assortment of accessories scattered about the mini-tank. While the huge amount of weaponry is overkill, I do like the radar dish and whip antenna...they work well, although it's tough to tell what the radar dish would be used for, considering there's no real terminal for anyone to sit at. Now, as for the weapons...the main arsenal are the twin cannons on the front, which work well. They fire missles and are adjustable, able to shrink down and extend (for what purpose, I do not know). But then you add two more machine guns on the top, and yet another one on the back, and you have a ton of weapons...way more than the two-man crew can even hope to control.

Speaking of the crew, another aspect I'm not crazy about is the main driver...he's standing, and thus provides the perfect target for enemy fire. If they could somehow work a cockpit in there so he's sitting at a screen that he can use to control this vehicle, that would help immensely.

Playability really depends on your age level here, I would think. I could see young kids having fun moving the main guns back and forth and pressing down on all of the external machine guns. The front two machine guns activate the missile-firing feature in the main barrels, which is somewhat fun, but really playability is somewhat short lived. This thing basically rolls around and has a few swiveling weapons and that's it. No opening doors, no intricate cockpit area, and the main cannons don't even raise (which is odd, considering Backblast's specialty is anti-aircraft...you'd think he'd be given a vehicle capable of such a feat). I do enjoy the back-to-back seating configuration, and for an Alpha vehicle this one is of decent heft, but there just isn't a whole lot to play with.

One thing of note- there are no electric features here. No press-button sound effects or anything. The "Action Attack" I assume are the firing missiles and the extending gun barrels, but beyond that this baby doesn't do much.

This little Alpha set does have a bonus, though. It's got a pretty darn nifty new-sculpt figure. Backblast borrows absolutely nothing from his classic design, but the new figure looks VERY military, with close cropped hair (and nice detailing on the short hair at that) and a relatively simple uniform. His standard black and gray uni scheme works well, even though the colors don't necessarily match his ride. He's got minimal design elements, with only a few pouches on the arms and legs, but these pouches are placed well. There are two straps across his thighs that don't really appear to do anything, but they do break up the uniformity somewhat...and I like his funky no-sleeve vest look. It makes him stand out at least a little bit.

Part of me is annoyed that Hasbro really can't seem to make an update to a character that at least retains some of the classic design elements of the original. The original Backblast had a thick black moustace, while this figure is clean shaven. Normally, this is a very minor point and not a big deal to me at all, but I think these little glitches are happening so consistently, it just wears me down.

Anyway...his face sculpt is very well detailed for a non-descript face, and I love his gloves. Very similar to Wild Bill from Wave 3, they add some different dimension to the figure and make him a little more interesting. His helmet fits well and looks nice, and he's got a cool little pistol in a boot holster (non-removable) that adds even more little detail to the overall look. The figure is definitely the highlight of this set for me...unfortunately mine shipped with one bottom arm on backwards. :( Hopefully I'll find some way to fix it without dealing with a return...

If this review seems somewhat confused and all over the place, that's probably because it is. My feelings on this vehicle are pretty random and unfocused because that's exactly what this vehicle is. It tries to do a little bit of everything, but does none of it really well. Is it a tank? An anti-aircraft station? A transport, or a fast attack vehicle? The answer is 'who knows' and that hurts the design scheme in the long run. When I look over the Neutralizer I find some things I like, but a number of things that could be better as well. Thanks to the Backblast figure, I will end up recommending a purchase of this item, athough I'm honestly not sure what purpose to advise for the tank itself. Just find Backblast a shoulder-mounted rocket launcher and stick him with your groundpounders. 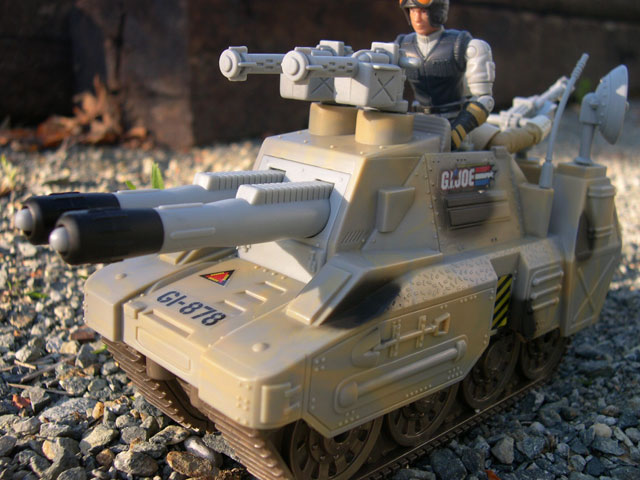 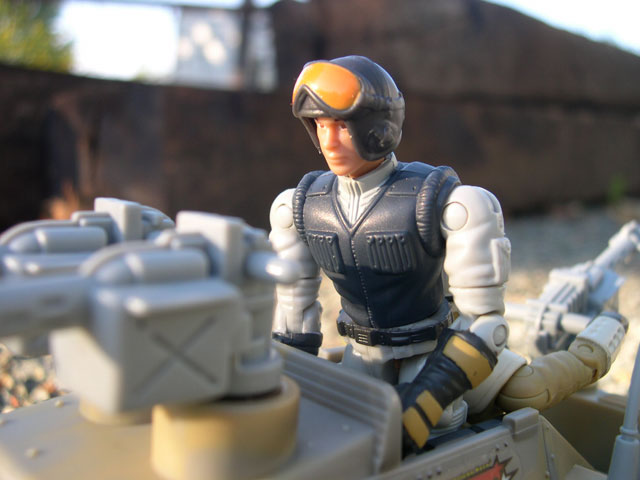 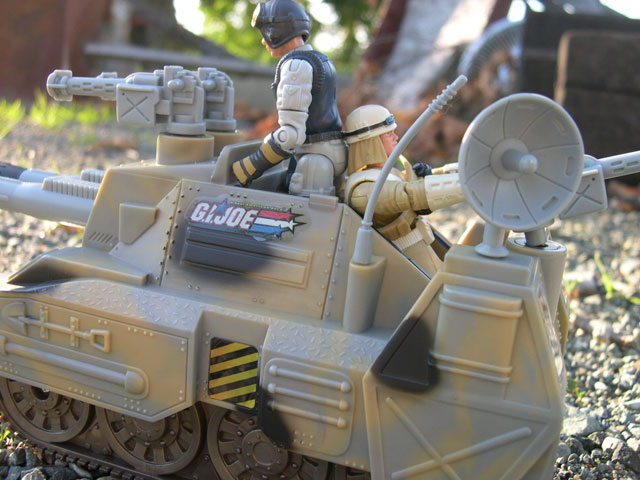 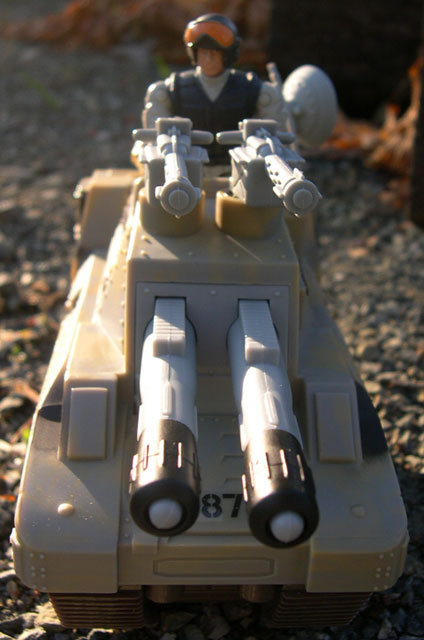 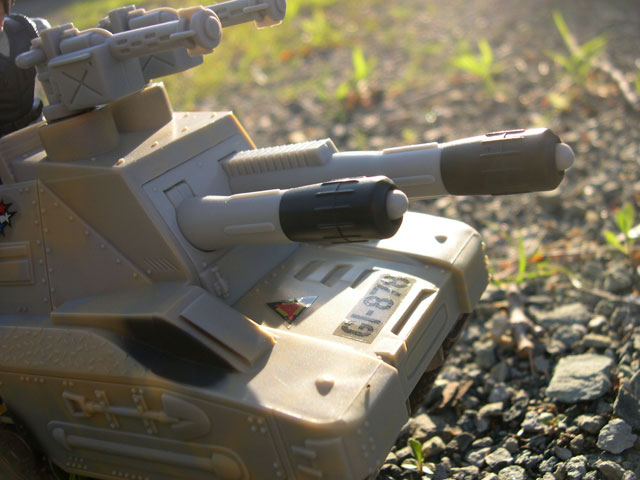