If I seem unnecessarily harsh in my review of the Quickstrike, you can thank this vehicle here for it. The past few years of subpar vehicles has made me look at some of them through rose-colored glasses, saying "well, yeah...this vehicle has problems, but so have most vehicles Hasbro has released since 2002". Well, vehicles like the Ice Sabre completely flush that theory down the toilet. I only wish a vehicle of this excellent class and caliber was something I could use in a more widespread function, and not relegate it to arctic use only. 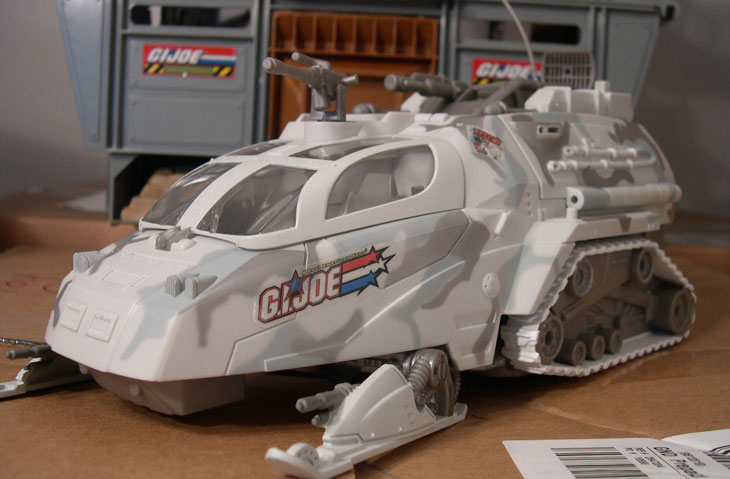 I am not lying to you when I say that this vehicle really looks like it could have been designed during the Joe heyday of the 80's...it is that cool design-wise. Taking a few cues from the COBRA Wolf from the old days, this arctic vehicle is slim, aerodynamic, loaded with play features, and packs a punch besides.

The Ice Sabre is something that a lot of the new vehicles seem to want to be, but can't quite make it happen. It's a modern, dynamic new vehicle that has all sorts of cool new design elements, and yet can fit right in with the classic line and look just as great as the vehicles of old did. It's front canopy is rounded, but still low to the ground and sleek enough to look fast and maneuverable, something that a lot of the new sculpt vehicles have a problem with. The combined skis/treads work well here as they did back with the Wolf, and the twin skis in front are completely movable...back and forth as well as pivoting from side to side. The entire body follows the slim form of the front to shape up to be a very cool quick little landcraft, capable of streaking over snowy hills and pounding away at COBRA forces.

The Ice Sabre has a pretty cool, diverse weapons system as well...not only does it have the minigun above the canopy, and the missile launcher from the back, but it also has small machine guns on the front skis, which could prove to be very useful in close combat with other snow vehicles. It looks like the pilots could use this trio of small guns to soften up COBRA forces, then bust out the rear quad-missile launcher and finish them right off.

Unlike the Quickstrike, the missile launcher system on the Ice Sabre really works. The raising tower with cage for the pilot on top, sitting between a quartet of quick-launch missiles looks like a very quick, effective way to deliver some pain and suffering to the surrounding COBRA ground forces. It swivels and elevates easily and the missiles launch pretty well. Some folks have mentioned, and part of me agrees, that the rear launcher would have been much cooler as a hovercraft or something, but as it is, it's a neat little hidden instrument of destruction that could quickly turn the tide of battle. All of these things are great, but the Ice Sabre has a little added bonus of a compartment in back where it looks like troops can sit. It seems to be a transport as well as an assault vehicle and again, unlike the Quickstrike, it works well in this regard. A very nicely designed attack craft with lots of playability in mind.

I've already mentioned the spring-loaded missile launcher, and this is definitely the central play feature of the unit. Hasbro is able to integrate it very well into the overall design schematic of this battlefield vehicle, which is something they have not been all that successful with in the past, especially on the Bravo sized vehicles. The Ice Sabre, I might even say, could be the best Bravo vehicle released thus far...and yeah, that's even counting the Jungle Strike. Where the Hummer maintains a strong sense of design style, it's only based on a real vehicle...the Sabre is completely thought up by the minds at Hasbro, yet still looks like a very cool Joe vehicle, and one I would love to use some time...if only I could find a way outside of snow to put it into action.

Here is another area where the Ice Sabre really shines. I mean, it's an arctic vehicle...the color scheme should be a no-brainer, and it really is, but the execution ends up looking very, very nice. A white base, for obvious reasons, would have been an easy way to go, but Hasbro tosses in some terrific off-white and gray camouflage to sweeten the pot a bit. The camo patterns aren't just haphazard splotches, they actually appear to be well laid out patterns of different shades of gray to provide a decent camouflage against the flying snow.

Like the Quickstrike, the componants that aren't painted in camo are a great silvery metal color, looking very realistic and effective. 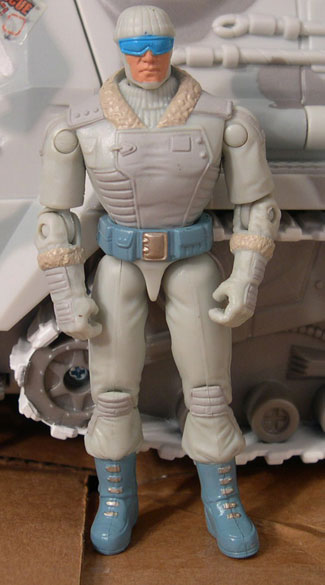 Frostbite is the included driver, which makes sense, since he seems to be pretty much the default Joe arctic specialist. This version of the figure takes some hints from the original Wave 1 Frostbite, but cranks it up to a more modern style. I find this version of the character to be unusually animation-driven, though. A lot of the figures look like they could work in an animated environment, yet still maintain that sense of realism...Frostbite, however, with his broad chin, large feet, and over-simplified detailing, looks like he was yanked right from a cartoon. Sometimes that works, and sometimes it doesn't...in this case, I'm not sure it does.

I like the mold over all...the skicap and goggles combination on the headsculpt looks nice. The parka design looks effective in keeping out the cold, yet has a neo-flair to it with the flap-over tunic and buttons. The fur collar and other thick padding throughout are nice touches, too, definitely maintaining that arctic look. The overall style of the uniform and look to the figure is nice, but the smooth look and animated features take away a little bit from the figure. This is too bad, since Frostbite has some great potential to be a very cool figure, but I'm just not sure the cartoon styling of the mold blends in real well with the other figures.

The coloring is nice as well, using an off-white/light gray base color to maintain his snowy camouflage, and the coloring of the fur is nicely applied and works well. Add to these existing color schemes a nice light blue trim, and it really brings the mold to life, yet still lets it maintain an arctic feel. All in all, not a bad figure by any means, and has some decent proportion...but unlike some of the vehicle drivers recently, not really a reason for buying the vehicle.

Every once in a while, Hasbro comes through with something that just seems to do everything it needs to do to be a success. Recently, it's only been the large Delta-class vehicles that seemed capable of doing everything the old vehicles used to do at any scale, but now with the release of the Jungle Strike and Ice Sabre, Hasbro has set a new plateau for themselves in the Bravo class scale as well. The only real downside is that this vehicle is mainly an arctic one, which bugs me, since I'm not wild about environment-specific Joes or Joe vehicles. Still, you have to give credit where credit is due and the design of the Ice Sabre is fantastic. Definitely put this one high on your "must buy" list and raise your expectations a little bit. Hopefully Hasbro can keep up with their own great product in the near future. 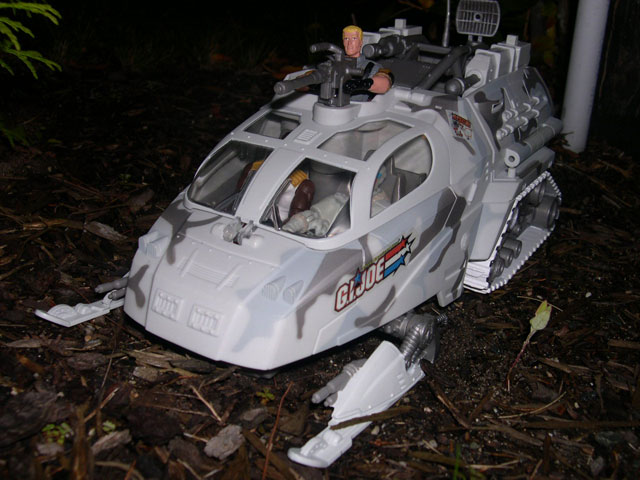 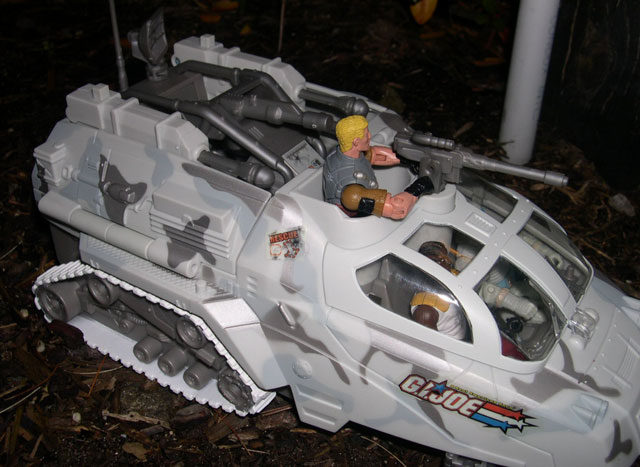 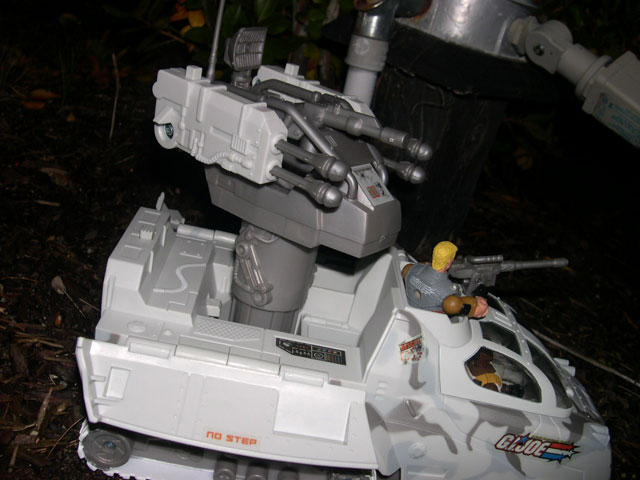 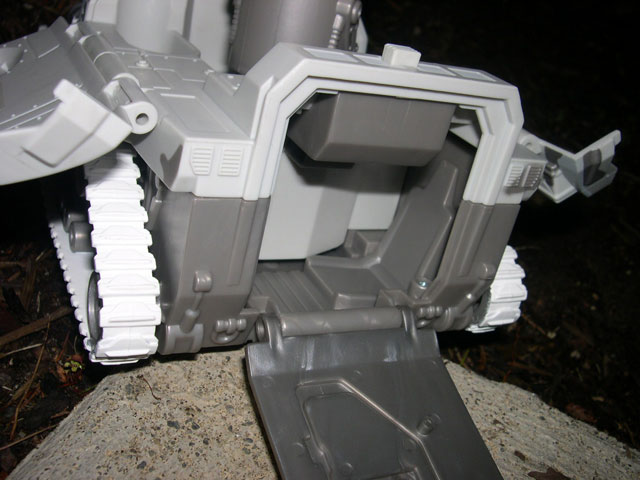 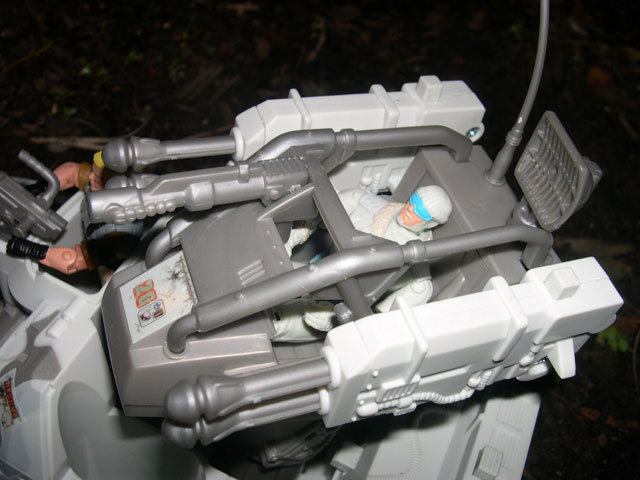