I've said it many, many times, and I'll probably continue to say it for the forseeable future...Hasbro's biggest problem right now seems to be consistancy. They cannot maintain a certain level of design or quality, or even apparent effort, which is kind of too bad.

Right now on the shelves, we have an amazing six-pack of figures. Figures elegantly designed, conceived of and executed terrifically, to bring a nice cohesive look to the set and show us some great molds that don't get much use. About as good a set as you can get. Unfortunately, the set I'm talking about isn't this one.

I suppose it really could be a lot worse...Hasbro could just be putting out garbage left and right...instead, they at least seem capable of putting out some really, REALLY nice sets, but then we get a pseudo-stinker right along with it. Sort of like the COBRA Urban Set and the Anti-Venom set. Some really nice figures sharing pegspace with what seem to be some pretty uninspired ones, showing what seems to be a lack of focus or direction.

Now this set isn't horrible, I don't think. It really isn't. Everyone knows by now that desert figures don't really float my boat...still, I can appreciate good figures when I see them. The '85 and '91 Dusty...the Battle Corps Duke...Desert Scorpion, Sand-Viper, etc... I can appreciate these good figures as good figures, even though they are limited to a desert use. The figures in this set just don't work as figures to me. They have some decent points, but for each one they seem to have bad points, and the good just doesn't outweigh. It's a shame...there are some potentially cool molds here that we haven't seen for a little while, and some cool parts-combinations. But, they just don't add up to anything really interesting, and the figures in general seem somewhat conflicted.

Ambush is the first figure out of the gate that I want to take a look at.

This figure has some great potential, I think. The Ambush/Sidetrack mold is a fantastic mold, with some terrific military styling.

The shortsleeved shirt combined with the thick quilted long-sleeves underneath just work very, very well together, making for a nice, different appearence. I've said many times that I like the quilted look to certain figures, and this is a great example why. It brings some decent detail to something that might look bland otherwise, and spices up the mold considerably.

The wrinkled detail of the shirt and the pants also works well...it makes sense that someone who spends their time crawling around in the desert sand would have a pretty wrinkled uniform, and the way the figure is sculpted makes it look very realistic. The strap of grenades across his chest is also a great way to break up the monotony of a straight-up military mold and the figure's sculpt altogether looks great.

The pants have a similar look to them, although don't look quite as military-oriented as the shirt does...they still work well, and I've always enjoyed the way the boots are sculpted up into the pant legs. I've always really liked this sculpt.

However, Hasbro is quick to do a couple of things that make this figure sting. First of all, Ambush's very distinctive, trademark head is history, replaced instead by what is probably the most generic head they could pick- Low Light/Big Brawler's. It's basically a guy in a beard instead of the excellently sculpted Ambush head/facial hair of old. I'd imagine the head is lost in India (ironically used there as Big Brawler) but it still stinks that we get this head as a replacement to Ambush...someone who looks so distinctive.

The next thing Hasbro does is pretty much botch the paint apps. These are desert figures, and the chocalate chip camouflage on the pants looks great. It's applied very well and looks quite authentic. The shirt however, gets the honor of being slapped in a bizarre green/gray hue that looks really, really dull. Something that could easily fix the dullness of the upper body would be nicely applied paint apps to the quilted arms...it worked wonders for Sidetrack especially. Instead we get a dull brown, which would have even been okay...had Hasbro bothered to color the upper arms. :/ Instead we get a flesh colored bicep underneath a green/gray short sleeve, which meets a dull brown forearm. Huh? Since when has Hasbro not been able to apply paint to the upper arms?? This just looks aweful. I don't know if he's supposed to have forearm-long fishnet gloves or what, but it looks silly...I would expect quality like this from a mock up or prototype, but absolutely NOT from a finished product.

I do like the application of the "warpaint" underneath Ambush's eyes, though...that's a pretty neat addition. However those two tiny lines of black don't make up for a general lack of color on the torso.

It's kind of a shame. I'm sure, with the proper budget, Hasbro could produce an excellent desert-themed figure. Like I said, the desert/chocalate chip camo looks GREAT. It's just only on his legs, and does not mix well at ALL with the bland color of his shirt and arms. The end result is a mis-moshed figure that just doesn't blend...get used to it, too...it's a trend that goes throughout this particular six-pack of figures.

Well, at least it makes sense that Hasbro finds it necessary to include Dusty in this set...I mean, he is the resident desert specialist, and his place on the team is only natural. So what the heck is Lifeline doing here? :/ Or is it Stretcher? Or Sideswipe even? What the heck???

All right, in all fairness, the only part of the figure that looks like Lifestretchswipe is the head...it's the same head they've gotten (well, Lifeline and Stretcher, any way) and I suppose it's generic enough so that it could work in other aspects as well. However, I just don't see the necessity of bringing it into this six-pack, epecially when we just saw it with the Anti-Venom set. Thankfully the rest of the figure is done up in Low-Light's mold, but I still don't know why they used this head. I can think of many other better alternatives (umm...including, oh I don't know...Dusty's head maybe?).

As I said, though, the rest of the mold is pretty nice...I'm one of maybe three Joefans who actually prefers the '91 version of Low Light over the original, and this cool as heck mold is a big reason why. The quilted torso and arms look great as a night operations uniform, and I love the ankle-length leather-type zippered pants. The underlying body armor looks great, as does the assorted cross-strapping throughout.

However, all of these good points apply to how the mold appeared in '91...as a repainted desert figure, this mold looks downright rediculous.

First of all, the way Hasbro painted the torso above the quilted uniform seems to indicate they were going for a flesh look. However that flesh look does NOT mesh with the body armor styling of that part of the figure. Not only that, but there is the strange flesh-armoring, then on the neck what appears to be normal flesh, and then more flesh-armoring on the upper neck and chin. Color me confused, I don't know what the heck Hasbro was going for here. Just bizarre. And of course, on mine the paint apps on the face are horrendous. He looks like that malformed dude from the Goonies...seriously. 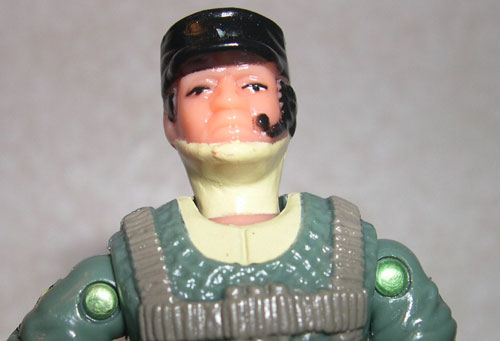 The torso, straps, and arms look cool on their own merits, although somewhat bland in more the green/grays and browns that Ambush got hit with. It doesn't look too bad here, although again, the combination with the desert camo pants just doesn't mesh. Another thing that doesn't mesh is that these pants are quite obviously not your standard military issue, and I can't think of a single situation that you would see pants of this material being designed in a desert motif. Not only that, but the pants are molded to go down to the ankles, and here, Hasbro has arbitrarilly painted boots at knee-height, where boots just do not exist. At first glance it doesn't look too bad, but upon any kind of close inspection, the utter silliness is readily apparent.

Like Ambush, Hasbro has successfully taken a decent mold and pretty much wrecked it, trying to saddle it with sub-standard paint applications and make it something that it is not. 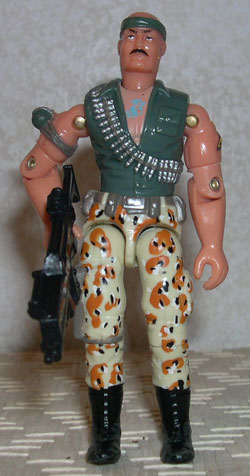 Well by the looks of things so far, Hasbro has dipped back into the 2000 Real American Hero collection to pull a lot of these parts and pieces to make up some new figures. It's not a bad idea, I guess, since it's been a few years since a lot of these parts were seen...although I'd prefer seeing them go back even further personally.

The next figure up to bat is Gung Ho, and surprisingly, I actually like this representation of the character. First of all, he's not an amalgamation...they managed to use all of the Battle Corps Gung Ho's componants to put this figure together, so it flows much better than the previous two figures did. This is also one of my favorite molds for Gung Ho (if not my favorite) and I think it works pretty well in a desert environment. The open vest and no sleeves seems to fit along with how this crazy Jarhead would operate in the desert, and the military styling of the pants lends itself well to what Gung Ho would be doing.

I always dig this head sculpt for him...even without his trademark Marine hat, he looks cool in a single bandana and moustache. He looks how Gung Ho should look, even though he doesn't stick 100% to all of the same characteristics that the original had. It works for me.

And unlike the other figures I've looked at so far, the paint apps on this one, while similar to the others, seem to work on more levels.

The gray/green of the open vest doesn't look as out of place here as it did on the torsos of the other Joes, which is an important plus. The machine gun belt is colored nicely and breaks up the torso mold well, too, which is another benefit. Like with the other figures, the chocolate chip pattern is applied very nicely, and unlike the other figures, it meshes pretty well with the pant design. I like the matching belt/holster colors that mix with the vest flawlessly, and the way the boots meet the pants actually works here.

All in all, Gung Ho is one of the more successful figures of this set, and I think a lot of it has to do with the fact that his mold was used 100% and not mixed and matched. I really do like it when Hasbro spices things up by pulling parts from other figures and making new things, but...they are obviously not professional customizers. They have a tendancy sometimes to slap parts together that don't necessarily mix (or represent the character intended) and end up with what looks to be a shoddy figure. Dusty was by far the worst case you can really get.

The next three figures will be covered on page two, just so we don't get too inundated with pics on a single page for those of you with slow connections... 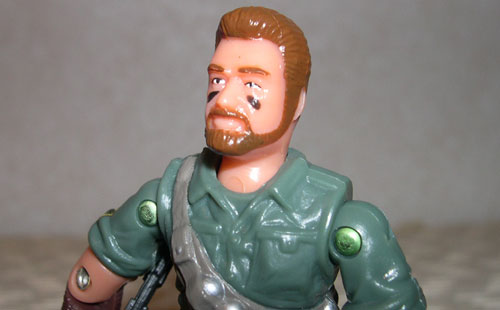 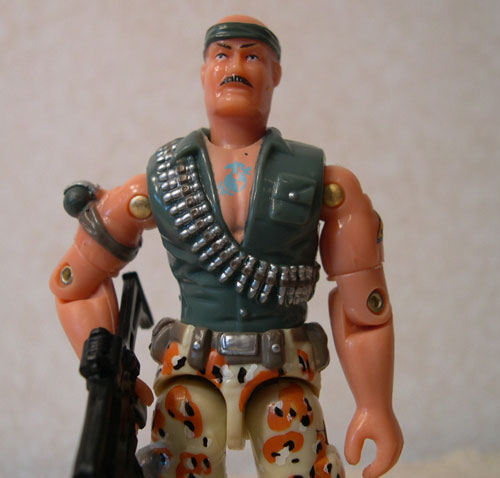 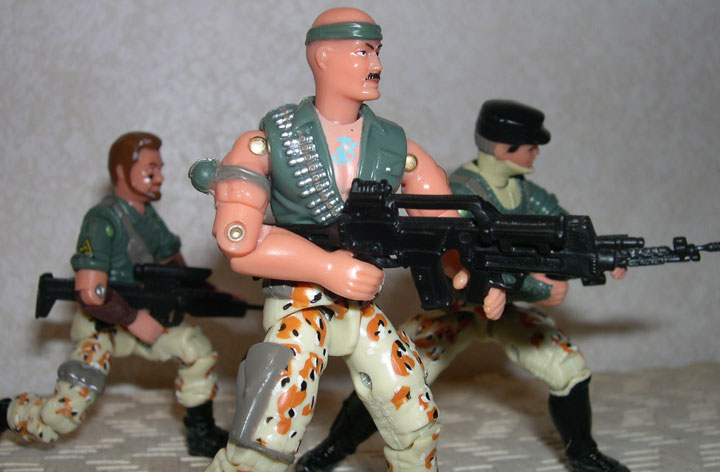 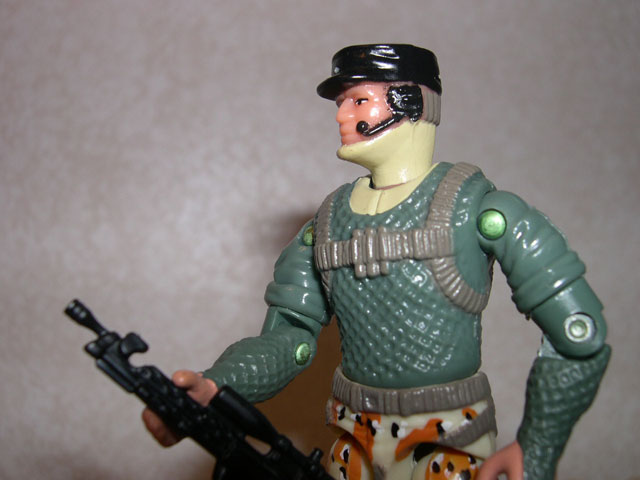