All right, as if we didn’t all know this by now, I’m going to come out of the “closet” so to speak. My name is Justin and I love the G.I. Joe stuff from the 90’s.

I don’t know how, I don’t know why, and I don’t know what changed…as a kid I couldn’t STAND the stuff. Even as an adult I question Hasbro’s judgement in certain circumstances, but that still doesn’t stop me from smiling every time I look at the ’92 Flak Viper, ’94 Viper, or even the ’94 Dial Tone. These guys are so out there, so non-military, but still really, really cool. At least in my mind. 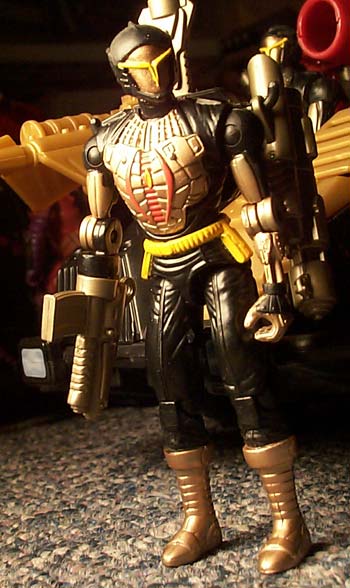 A lot of people are stuck on the concept that G.I. Joe is strictly a paramilitary anti-terrorist organization, which I will admit, it did start off as. But it has grown so far beyond that. I have no problems with that opinion at all, and heck, I use it as a solid basis for my whole Joeverse, but storylines get so much more interesting with some futuristic/sci-fi elements thrown in, and the 90’s seemed to be getting into that groove.

Of course, too far is too far, and like most Joe fans, Ninja Force and Star Brigade left me cold (well…frigid is more like it) but it seemed just as G.I. Joe was rounding the corner again and ready to come out with some great stuff, the line got the axe. That didn’t stop them from still releasing some great stuff that looks and works GREAT, even though it’s basis in realism is flimsy to say the least. This is a perfect example of a 90’s vehicle that could have gone horribly wrong (and did back then) but is completely redeemed by a side-change, some new paint apps, and a few new figures.

I have to say, without a shadow of a doubt, that the COBRA Android Personnel Carrier is far and away the best Toys R Us Exclusive to date. And yes, I do already have the COBRA Infantry Forces 6-pack.

See the deal with the six-pack is, sure it’s a terrific set and will sell tons of figures, but come on…it’s a no-brainer. Slap six COBRA troops into a box and ship it, guaranteed revenue. This APC looks like it took some thought, took some time, and it came out to near perfection.

Over the years the one major thing COBRA has been lacking is a form of troop transport. A few things tried to take over the reigns, including the HISS II and the Parasite, and both did it fairly well, but still there seemed to be something lacking in the armored troop carrier division. G.I. Joe always had their trusty APC, which I still use to this day—it’s one of those timeless vehicles that you can always find a use for. COBRA, however, really didn’t have anything to match it. The Parasite was under-armored and under-armed with some very exposed cockpits and not a very aggressive arsenal of weaponry, while the HISS II only really held 4 troops. Neither did the best they could. Now, though, that has all changed.

The COBRA APC carries not eight…not even eighteen…but TWENTY-FOUR COBRA troops! Twenty-four! Granted, the bulk of them are crammed together on running boards and footpegs, but man, that’s a nice selection of COBRA soldiers that this thing can heft into battle. Especially when you consider its designation as an “Android Personnel Carrier”. Imagine this tank of a vehicle pounding into enemy forces with two dozen B.A.T.s on board? That’s some serious damage we’re talking there.

In my world, though, this will carry human troops, not necessarily robots. B.A.T.s do have their place in my world, but it’s a small place and they are used for specialty missions only, and are not COBRA standard equipment. I understand the need for them in animated formats to actually give the Joes something to kill, but in my little world, I find flesh and blood antagonists much more appealing. And, man I love this vehicle far too much to limit it to carrying androids I only use sparingly. As a matter of fact, I’ve already found the perfect task for this…my Valor Vs. Venom Vipers! The red doesn’t match perfectly, but all in all, an APC loaded with those guys looks very intimidating to the opposing forces! 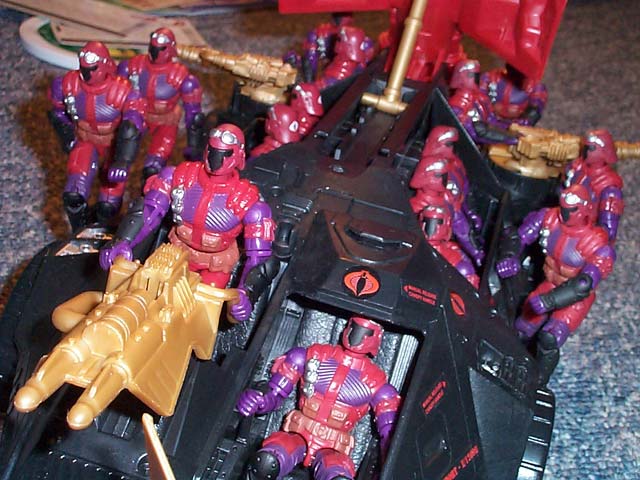 But I suppose that’s enough hypothesizing…why do I like this set so much, and what makes it a success? Well, pretty much everything.

The vehicle itself is a design based off the G.I. Joe Monster Blaster APC, but works far better as a COBRA vehicle. It’s sloped front, thick armor and out of the ordinary arsenal just screams the snake guys much more than it does the Joes. It almost looks like it was meant for COBRA originally!

Hasbro also takes advantage of the vehicles design and shape to use whatever weapons they can to their advantage. The main canopy is well armored, and the passenger seat has a terrific folding cannon that can be armed by a person and positioned in several different ways. Then we have the massive main cannon, which can elevate to fire, but also acts as a door to reveal the throng of COBRA troops hidden beneath it’s armored hide. Even the main weapon’s launching system is very cool. I’m not a proponent of spring-loaded weaponry, but in this case, it works well, and looks to be an intimidating weapon of destruction. But we don’t want anyone sneaking up on this vehicle, so the twin cannons on both sides are useful for defending from those angles as well as from the rear. Plus they add two more seats for more troops.
The vehicle does an excellent job of combining a slick, angled design with some serious armament to get a great, thickly armored, but functional COBRA transport vehicle.

But come on…we knew all of this, right? What about the Monster Blaster? Well, I will concede that the Master Blaster APC was obviously an excellent vehicle…but it suffered the same fate as the Mega Marines who it was made for—a great mold saddled by some unusually bright and hurtful colors. The old APC was great, but in an oddly bright green and yellow color scheme, many Joefans didn’t give it a second guess. Or, like me, didn’t get it the first time around, and couldn’t see paying huge prices to get it on the secondary market. Personally I’m glad I waited. I’m much happier only knowing this cool vehicle as a COBRA transport than the Joe transport it tried to be before. 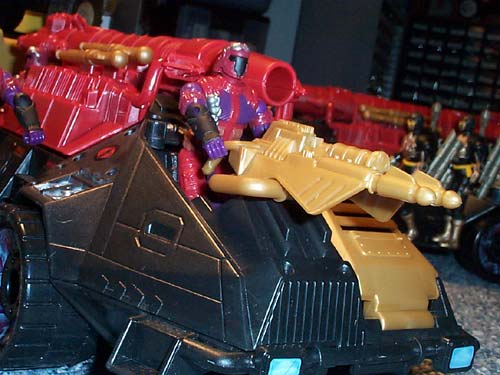 And man, what a difference some new shades of paint make! This black, red and gold paint job just brings this transport to a new life it really didn’t have in it’s old incarnation. The sheer black body and red main cannon mesh together perfectly in COBRA colors and really look fantastic. Add that to the great gold trim and all of the other intricate colors used in detailing throughout the vehicle, and not only does it just look cool as a COBRA vehicle, but it would fit right in with the Iron Grenadiers as well. An all purpose transport for everyone!

But even this isn’t what makes this vehicle special. This thing is just plain a terrific value, and that alone will draw in new fans, which is what this is all about. With this transport, you get a great mid-sized vehicle, plus THREE COBRA Android Troopers! How can you go wrong? Twenty bucks for three figures and an awesome vehicle is just an unbelievable value and I’m hoping it will gather more younger fans to the line and give them some instant COBRA armies to battle against.
The BAT’s themselves aren’t too bad either. They’re based off the B.A.T. 3.2 from Wave 7, which is the best incarnation of this mold, with the attachable limbs and the backpack which holds the extras. These new B.A.T.s come with all the familiar accessories, but have some nice gold highlights that make them stand out from their Wave 7 cousins. I’m really not a B.A.T. fan as I said, but these figures are appealing and the fact that it’s so easy to army build these guys, I’m happy Hasbro included them here.

So, basically, this set is very much a no-brainer. A cool designed transport in a terrific new paint scheme; holds two dozen COBRAs and comes with three B.A.T.s; plus it’s only twenty dollars for everything. Buy this thing, and don’t hesitate. Heck, do what I did and buy a couple! You even get to put the stickers on yourself! A great toy from Hasbro and Toys R Us. 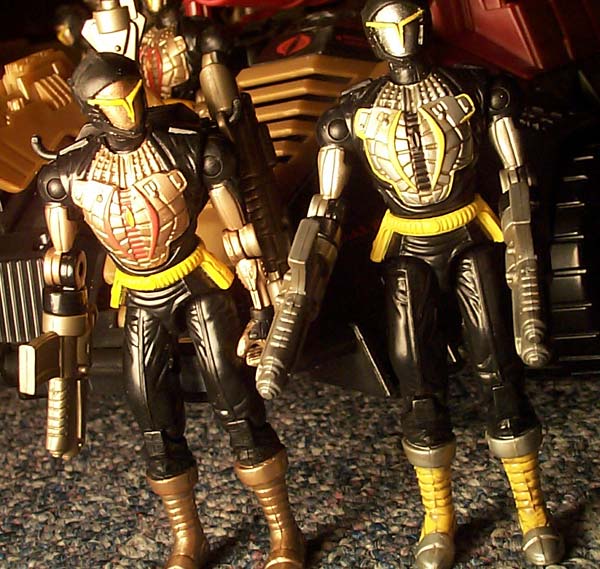 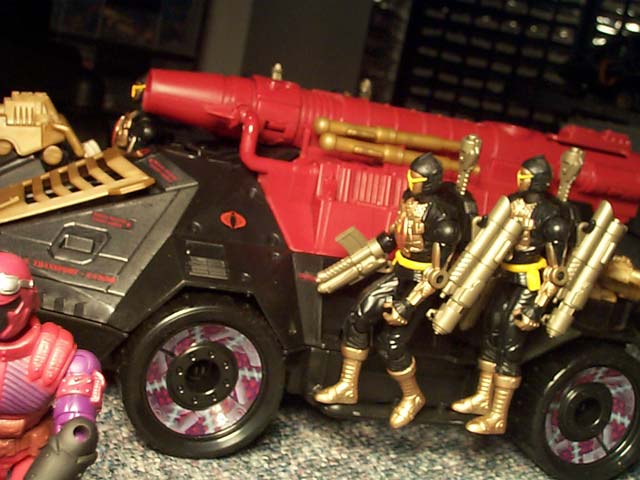 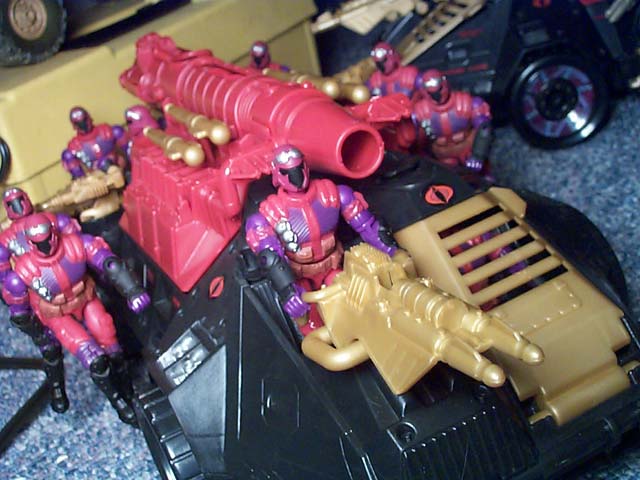 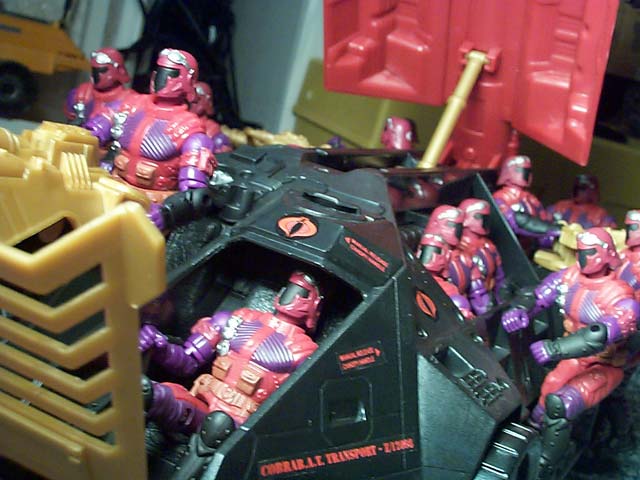 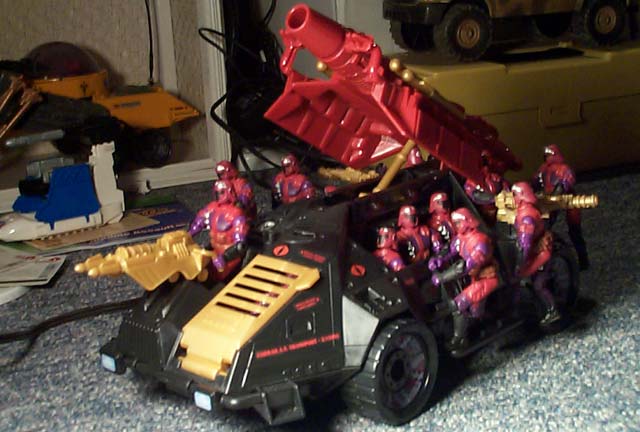 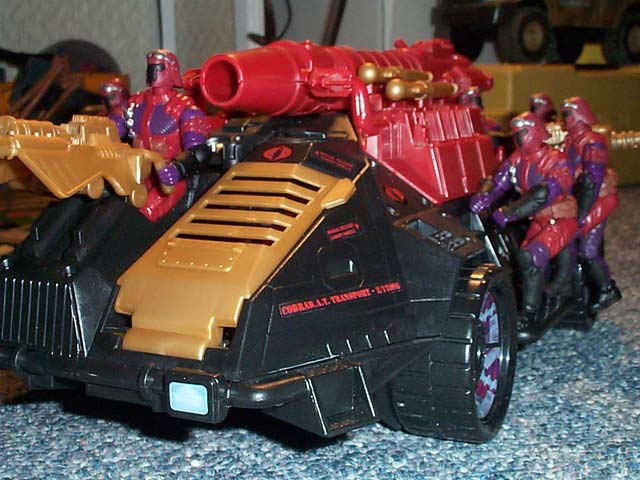 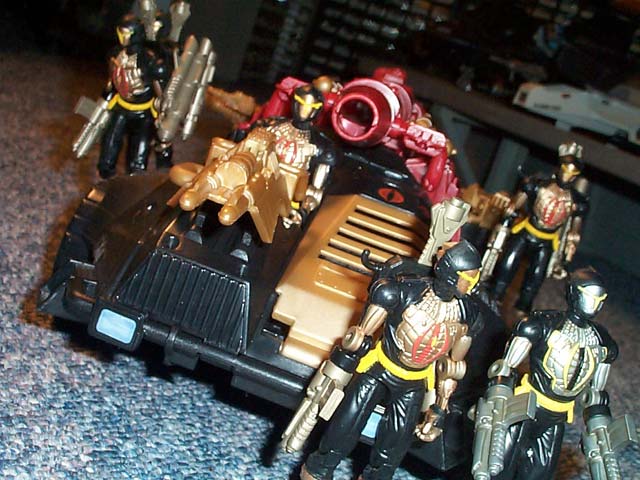