Several times so far throughout the history of this new Joeline, we've gotten figure releases that are quite obviously meant to be someone else. Dart was, without a doubt, supposed to be a new Spirit, however, it would appear that Hasbro was unable to acquire the trademark at the time. I actually don't mind so much, because Dart has proven to be a pretty cool figure and a decent enough character on his own, even though he bares many similarities to everyone's favorite Native American Tracker.

While I picture Spirit as a much more Covert Ops and security type, Dart makes for a good pointman and overall soldier. Spirit might be called in on really specific missions, but Dart works well as an overall support guy for your general squad, and uses his gifts to his utmost ability without the apparent "spiritual" capabilities that Spirit seems to posess. The first release took this military aspect to the nth degree with a straight green drab khaki uniform, combat boots and fritz-style helmet. The second release threw the colors a little more out of whack, and here we are with the third release, which doesn't really do much to further the Dart figure in general...some minor color changes here and there, but nothing drastic and, really, nothing overly interesting.

Dart's mold remains as it was back in Wave 4 & 6...not to say it's a bad mold...just the opposite. The figure itself is very cool, a nicely in proportion trooper with large arms and legs, but maintaining the scale throughout, which is something Hasbro has had problems with in the past.

The open vest w/ Eagle medallion has always looked pretty neat to me, and I still love the head sculpt, which is definitely Native American. The combination of the helmet, ponytail, and feather in the strap all look very cool to me and give the figure a wealth of personallity before you even really get to know him. When you can just look at a figure and get a judgement going for what he or she is like, that's a great basis for a toy and for a character.

The bare arms are adorned with some nicely detailed bicep armbands, looking Native American in design, although to be honest, I wouldn't be able to tell one way or another. One last detail that looks very nice are his gauntlets. In the only real departute from military roots on the figure, he has some forearm guards that are very cool and add some nice G.I. Joe-like flair to the figure, which otherwise could simply be another soldier. His legs are nice enough, looking relatively plain with the exception of the cool-as-heck knife sheath on his right thigh. He comes with a knife to fit in there nicely (although no other accessories at all, other than the gun station), but the rest of his legs look pretty generic. One thing that bothers me, too, is the molding of his legs, for some reason, forces him to stand somewhat awkwardly...he's kind of pigeon-toed, I think, although it is a minor complaint, and one I can live with.

The Night Force Dart still remains my favorite, from Wave 6, and this version still doesn't really compare to that one. His vest is changed slightly to a bright tan-like color instead of green, but his legs almost look to be pretty much the same shade we got in Wave 4. There are very few changes that I can really see, and it's possible they were trying to design the figure that way, but it doesn't work real well.

Like Barrel Roll, it almost seems as if a pseudo-desert motif is what Hasbro was after (especially considering the deco on the gun station)...it works pretty well for Barrel Roll, as a deep, dark brown, but for Dart it does not work nearly as well, giving him just a sort of bland, barely different paint deco than he had the first couple of times around.

As mentioned above, Dart barely comes with any beyond the elaborate gun station originally available with Big Brawler. Like that version, this station is hit or miss, with some neat design elements, but just not enough cool features to tie it all together. I like the wheel-stand, and the seat/computer console combination really works. However, the large, blocky missile launcher just seems kind of silly to me. It didn't really work in Wave 7, and it doesn't especially look good here. It's too bad, because the base is there for a potentially cool defensive or offensive weapons-platform, but it just doesn't execute that well. Perhaps like the Assault Quad was retrofitted as the pretty-cool Venom Striker, we might eventually get a remold of this that works better than this version...I'm not really holding my breath, though.

Besides the gun station, all we've got is a run of the mill survival knife, which looks cool in his leg sheath, but provides very little covering fire for when the gun station gets fragged. I like that they actually gave him a weapon to fit into his accompanied holster, but some sort of firearm as a last resort would have been appreciated as well.

Dart just doesn't really do it for me here. The figure has a great base, is an excellent tooling and has the potential to be great, but this version just doesn't really fire it up. Bland colors and a lack of decent accessories hurts this figure even further. While Barrel Roll and Storm Shadow are both pretty cool updates and should be figures to keep an eye out for, I don't see a real reason to add this version of Dart to your army. 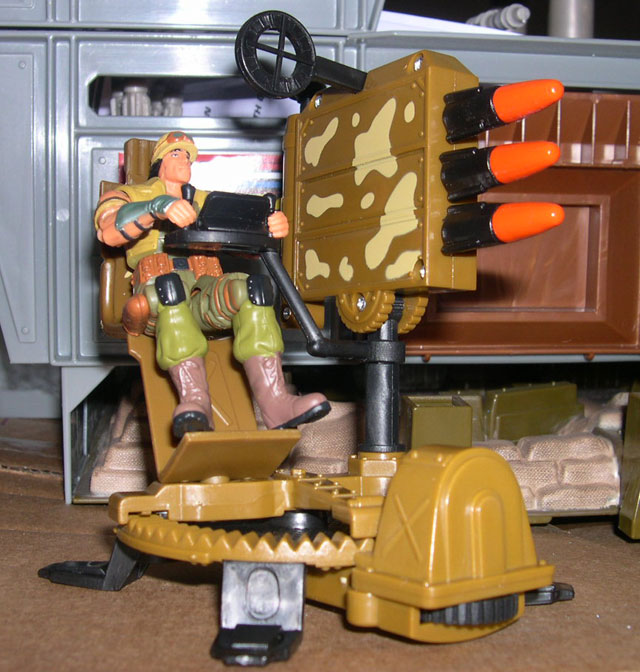 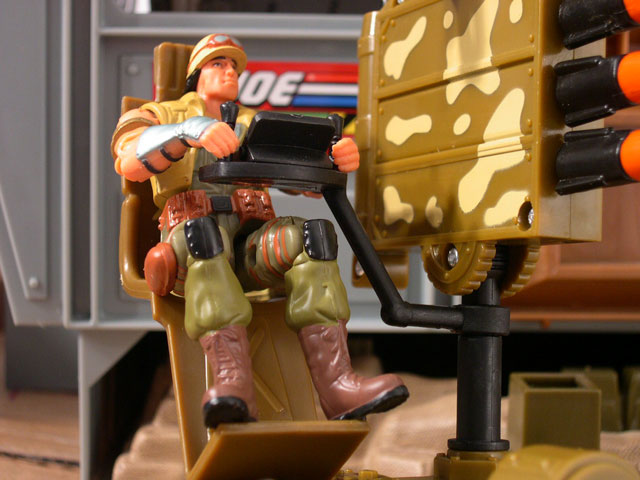 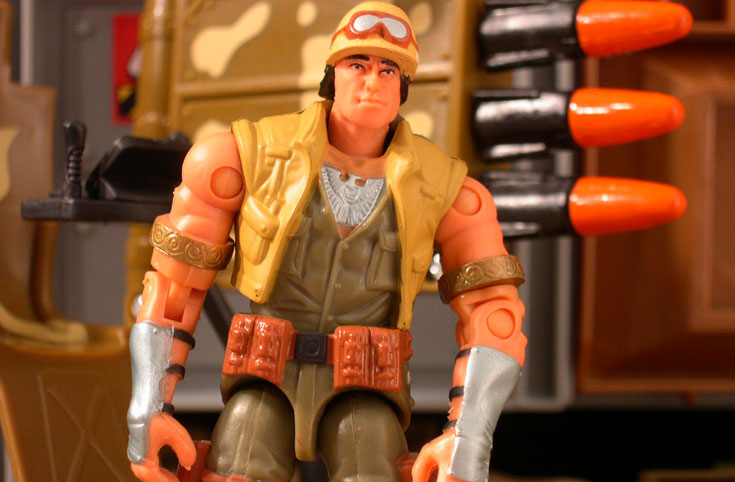