It was pretty late last year when we first caught glimpses of some mysterious G.I. Joe figures which seemed to be returning to their roots and coming in single packs. Personally, I enjoy the two-pack format, but for discount prices and trying to draw in new fans I see nothing wrong with releasing some single packs.

However, what really drove us nutty completists crazy was that these single packs contained figures that were different than the two pack versions. Sometimes drastically. ARGH. So we all wondered just where and when these things would land, so us mentally unstable people who need every figure released could calculate where to pounce.

So we waited…and watched. And I honestly don’t know what the heck to tell you. This set of single packs I have came from a gentleman in PA who claims that Hasbro cancelled this release and only offered them up for presales to interested parties. Personally, I’m not at all convinced, and I’m certain that in a few months time, these will be showing up amongst drug stores and discount places across the country. Myself, being the psychologically unstable sucker that I am, bought them from him anyway.

But really, I’m not here to provide a review, per se, frankly because reviewing 10 repaints would just be dull. Instead I’m posting comparison pictures and hopefully providing information to those other crazed completists about exactly what makes these figures different.

First up is Duke: 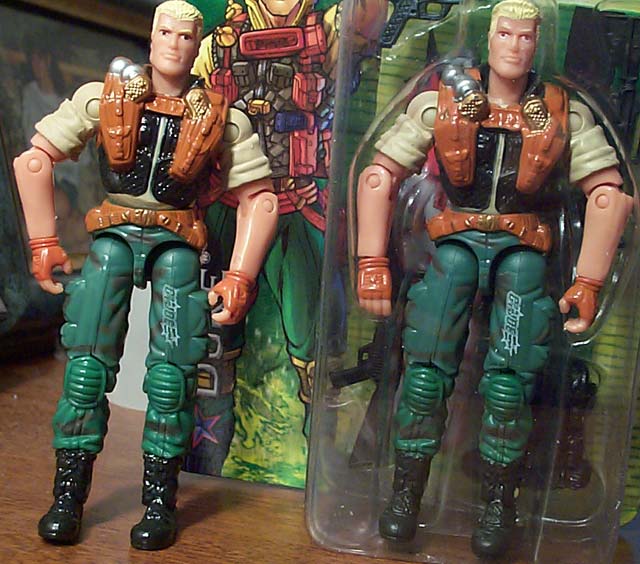 Comments: Pretty much the same figure, although with a very nice compliment of pretty decent weapons. None of Wave 4 Duke’s accessories are here, and the only difference really, is the shade of eye color. Only for true crazed completists. 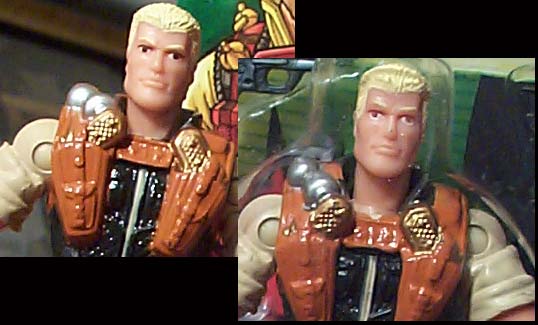 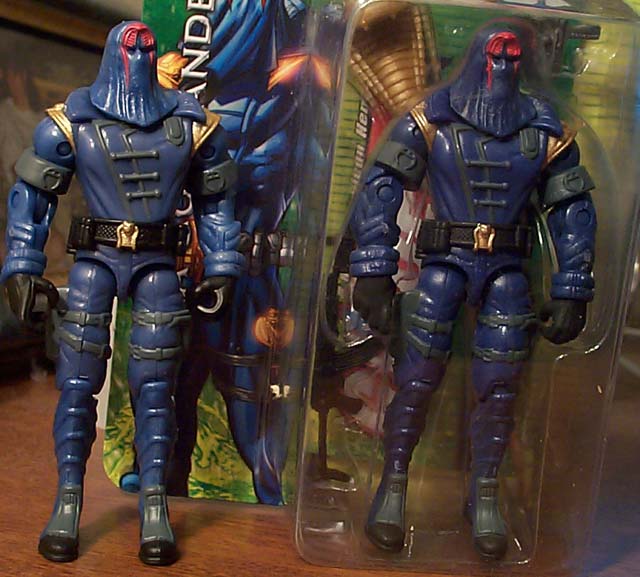 Comments: A very cool new version of the O-ring CC. I love the newer, darker shade of blue and he’s got some pretty neat accessories, including my personal favorite AK w/ bayonet. I see some moderate interest here, even for non-completists. 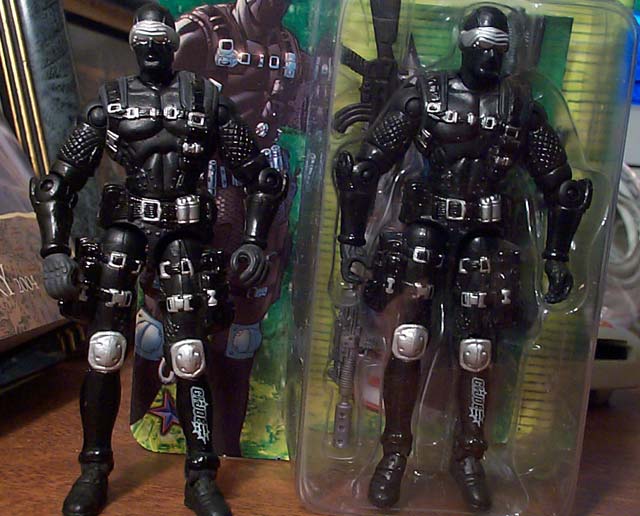 Comments: Very basic differences, and the shades are minor. Only for purebread completists. 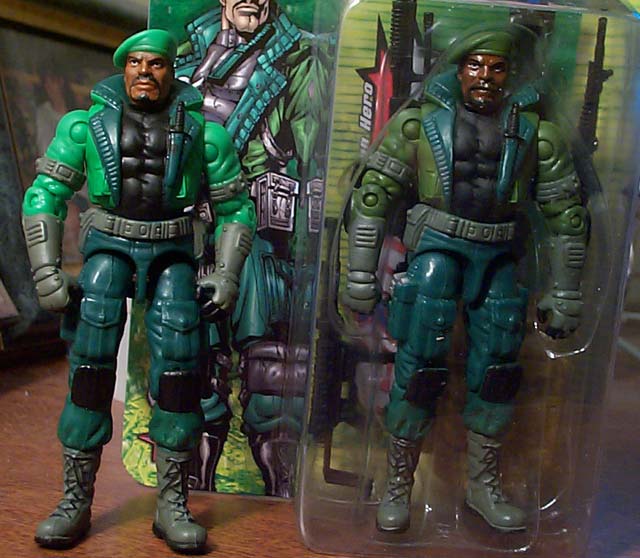 Comments: A nicer, darker color scheme, but not a huge difference, really. Probably not much demand for non-completists 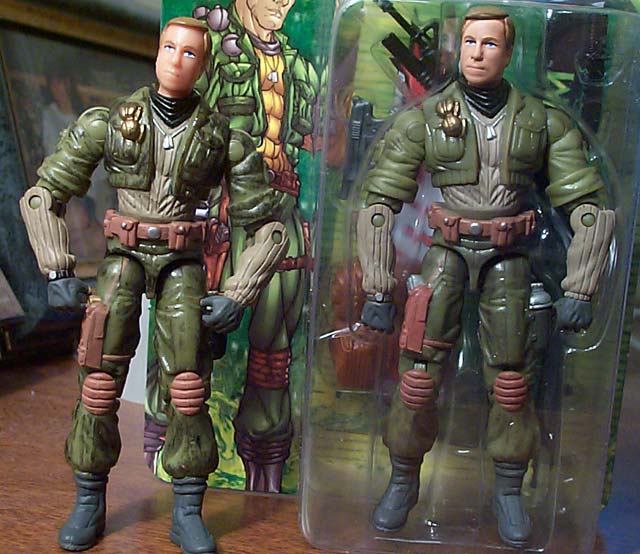 Comments: I like this version a LOT less than the original. The removal of the black wash really affects the figure in a negative way. He also doesn’t come with any of the cool accessories that made Crosshair what he was. No boonie cap, no flak vest, belt or sniper rifle. Avoid, unless you’re a definite completist. Differences: None that I can tell. Figure looks identical

Comments: Good for army builders, as it will mesh perfectly with existing figures. Not bad weapons selection, but not great either, at least he comes with his helmet and shoulder pads. Will be in high demand due to army builders, and he should be, as long as the final price is pretty cheap. Comments: A lot of people have been clamoring for a CLAWS in his classic colors, but with an O-ring. They get their wish as this figure looks pretty darn close to the Wave 1 paint scheme from what I can tell. Army builders will enjoy as well as new sculpt fans. Comments: Basically the same as the Wave 5 figure, only with black boots. With the newer, much better VvV Wave 2 version coming out, don’t see much demand for this one. Only for serious completists. Differences: Same as Wave 7.75 version, from what I can tell. O-ring design, but in classic colors. The single packed version also has a slightly glossier belt/holster and thigh strap.

Comments: Horrible accessories most likely won’t stop folks from picking this guy up. He’s a COBRA Trooper, and one that was discontinued early in production last year. Lots of Neo Viper fans, and the ability to buy one not packaged with a Neo-Viper Commander should be enticing to some. Pretty high demand for this one, I’d say…he’s a decent troop filler. Differences: Wave 4 paint scheme with the removable weapon arms of the later versions

Comments: This one will be on the top of everyone’s lists. He’s got a great darker color pattern of the Wave 4 B.A.T., but comes with his removable weapon arm we all know them for. A very high point of this set and should be in very high demand from completists, army builders, and basic Joe fans. Great figure.

And that pretty much sums it up.

It's pretty cool to see G.I. Joe back in the single pack formula again, and the predominant card art really looks nice as well. As much as completists will be cringing with these different paint decos, it's cool that Hasbro puts a little extra flash into releases like this instead of merely re-packaging existing figures with zero changes. It will keep demand up for certain.

Overall, I’m happy I managed to get these figures, as I’m honestly not sure how available they will be. I hope they make it to retail shelves en masse, because there are a decent number of cool army builders people will want to snatch up. I’d estimate a $3-$4 price tag per figure, which is definitely worth it for most of these.