Well, I knew when I saw this setup in that glass case at the convention this summer that we'd have another highly desirable, army building exclusive set on the shelves in time for Christmas. Hasbro teams up with K-B this time to pull some stuff from their already wildly successful formula.

Well, so far the set hasn't let down. Rumors began flying right off the bat with a mis-label during the convention (labelling this as a K-Mart Exclusive) and haven't let up since. Is it going to be available online? Only brick & mortar? What heads are underneath those helmets? Does the ASP still come with it?!? Has it been cancelled?!? 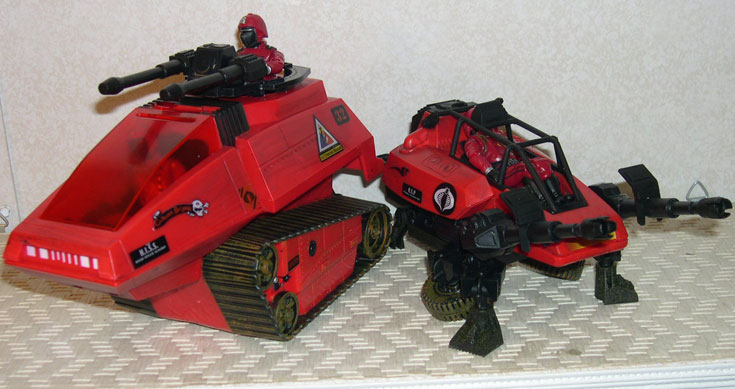 The recent Vamp/Whirlwind combination from Toys "R" Us really proved that you can take a few smaller vehicles and really make something pretty cool out of them, even if one of those smaller vehicles isn't the greatest in the world. So what's going to happen when you take two VERY cool small vehicles and add up three even cooler action figures? Well, you get what's pretty close to a home run of an exclusive set. Unfortunately, Hasbro being the way they are, they can't quite hit it out of the park...there are a few downsides (at least in my eyes) but for the most part, this set rocks.

Design is pretty much a "gimme". I mean, come on...the HISS Tank?? The cornerstone of the COBRA motor pool? This nicely angular, streamlined, mini battle tank has been COBRA's main assault craft for going on two decades, and I'm happy to report, it succeeds just as well these days as it did back then.

The HISS was never meant to be a heavy attack craft...the shape and slope of the armor, as well as the angular treads are just plain built for speed. I see the HISS rocketing through an urban environment, running circles around enemy tanks as it pounds them with high caliber cannon fire. The cannons aren't insanely powerful, but they're strong enough to rock their targets nicely and still let the tank move pretty quickly. The HISS's body design itself is legendary, and many vehicles have imitated it since...a great, great vehicle design-wise.

Another favorite of mine is the ASP. This awesome little COBRA gunpod is an often overlooked and forgotten piece of hardware that serves some very cool purposes, and is pretty fun to play with to boot. Like the HISS, the design is angular and highly technological, something COBRA has always been well known for. While the canopy is flimsy the design is great, and the vast wealth of movement really helps the ASP to become a very neat little piece of COBRA weaponry. With flip-up wheels and alternative legs, it's easily transportable, and within seconds the twin elevating cannons can start raining fire upon approaching Joe aircraft. An excellent accessory in design and execution.

The playability factor isn't REAL high on this set, feature-wise. Besides the opening cockpit on both vehicles, the swiveling turret on the HISS, and the great movement of the ASP, there really isn't anything "automatic" or really "playable" about them. However, their small size allows for some terrific, easy, on the spot battles, which is definitely a notch in the positive column.

The three figures help in this category as well, with their removable helmets and shotguns.

Hasbro's execution on the paint apps for this set is pretty darn good, although the red shade is a little on the bright side. Even with the somewhat bright red, there is a gentle wash of dark over the entirety of both vehicles which dulls the color brightness considerably (that's a very good thing in this case).

Along with the red, there's an excellent black trim on the turret of the HISS, the treads of course, as well as the rear footholds, which really adds some nice color to the vehicle and makes it come together excellently. The ASP maintains this same combination of red and black, which matches well with the HISS and looks equally good. The tires/treads of both vehicles also have a great wash of brown, which brings out the detail and makes it look like mud-splattered wheels as they should...it's a technique Hasbro originated with the 2001 HISS and it still looks great. Combined with the black wash of the vehicle itself, it brings a nice level of detail that might be lacking otherwise.

The stickers are somewhat of a mixed bag...they don't appear to be "paper" stickers, which is great, but they do have a dark background to them, which breaks up the look of the vehicles somewhat, which is too bad. I dig the sticker design and logos quite a bit, and I really love that the ASP actually has stickers on it designating it as such (even though it's not mentioned by name on the package)...the logos of the Crimson Brigade actually mesh really nicely with the logos on the CG's shoulder, too. Pretty neat way to tie everything together and add some nice zip to the set.

But, however good the execution is, I still can't quite get over this idea conceptually.

The Crimson Guard has always been an Elite, undercover unit...as their ranks continue to swell and their armory continues to grow, I can't help but think their focus is somewhat lost because Hasbro's attempting to capitalize on their popularity (something I can hardly blame them for). While the Crimson Guard is far and away my all-time favorite subset (if they can be called that) I have a hard time figuring out exactly why and where they might be using a squad of HISS tanks and ASPs. Heavy armor and assault gunpods do not really scream "undercover" to me.

But since the inception of the Crimson Guard 19 years ago, they have worn many hats, and it's become evident over the years that they're meant more as an elite fighting force and less as a strict undercover operation. Their growing assortment of vehicles and staffmembers has given them more of a fighting force sensibility, and I don't think that's a bad thing necessarily, it just might force me to reconsider their place in my Joeverse. Thankfully the design and execution of this set is good enough to cause me to rethink this...these are both pieces I like enough to try and integrate, rather than just write them off. 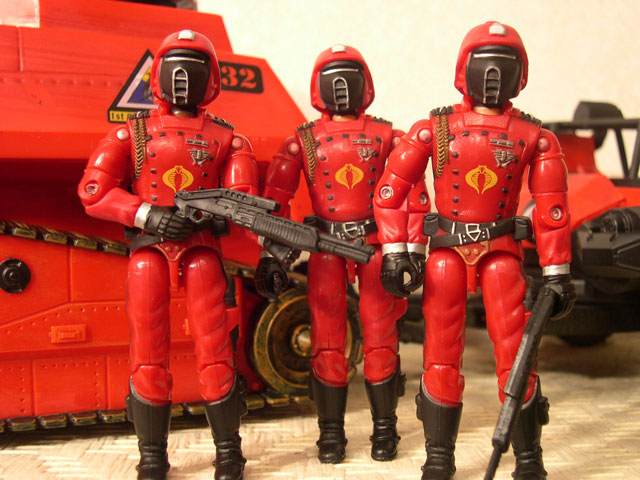 Unfortunately, this stings...just a little bit, but it does sting.

The Crimson Guard is definitely among my top five favorite figures of all time in G.I. Joe lore...I LOVE the original Crimson Guard. Their purpose, the figure mold itself...it's just plain fantastic.

These figures, unfortunately...just don't quite cut it. They come SO close...they could be SO cool...but they just can't fit in 100%, which is a shame.

The good points are obvious-- the mold, for the most part, is straight up Crimson Guard goodness. The regal looking torso with the braided shoulder loop...the awesome old-style revolver on one leg. Those awesome boots and pant-lining details are all terrific little touches and are brought over fantastically. I love the arms as well. Unfortunately, I just have a hard time still getting over the look of the removable helmet and the tiny, yellow COBRA sigil.

These seem like such minor issues, but when you love the Crimson Guard like I do, these minor issues are problems, because you really, REALLY want to see new versions of these terrific figures. I do love the feel of the new plastic and the way these new figures "play", and I think that's what really makes this sting...they're so close to the perfect representation of the CG's I know and love that I just want them to go that extra mile.

Don't get me wrong--the figures are GREAT. Like I said, the terrific, classic mold...the awesome deep shade of red and black (which in some ways I almost like better than the originals) and the head sculpts underneath the helmets are flat-out fantastic. Nice, deep, scornful looks covered by a very effective wrap-bandana mask...different hair colors and ethnicity...and they look to be completely newly sculpted for this set. Awesome stuff. I just wish we could get some CG's with their original, non-bulky heads and just a different symbol...these little changes would make a world of difference to one of my favorite figures.

In spite of some of the conceptual problems with a set of this type, I find myself liking it VERY much, which shouldn't be a surprise. While I really, really wish we could get some non-removable helmet Siegie's, these still work nicely as a new generation. They do not mix real well with my established core of Crimson figures, but on the other hand, the Agent Faces figures will fit in much better now. ;)

All in all, Hasbro took some terrific vehicles, terrific figures, and put together a pretty darn close to terrific exclusive set which should prove to be a money maker for K-B Toys. Unfortunately, they couldn't quite nail it with those minor issues with the figures, but they did a very bang up job. Great set, buy lots. 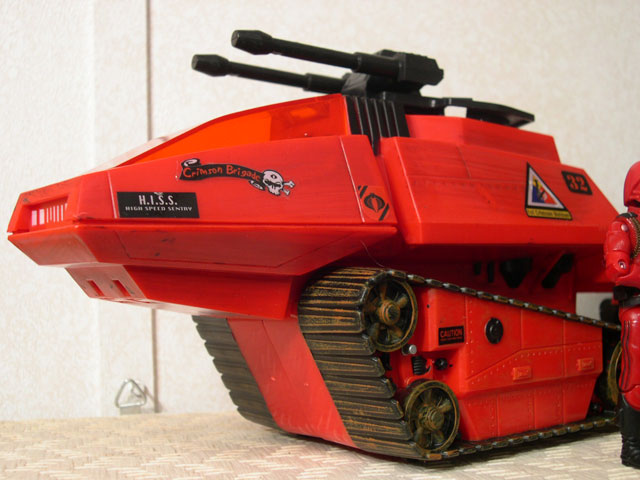 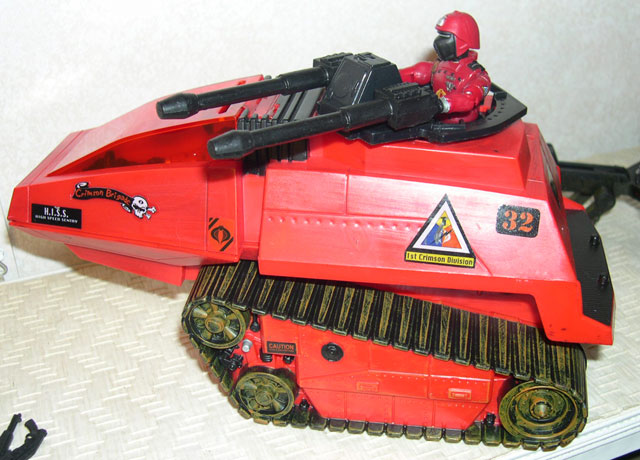 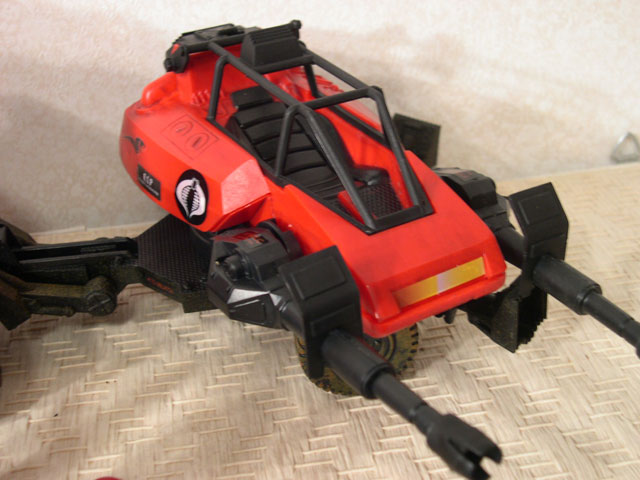 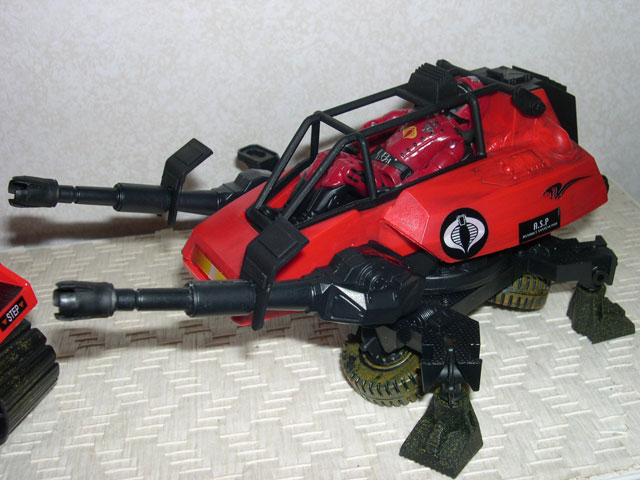 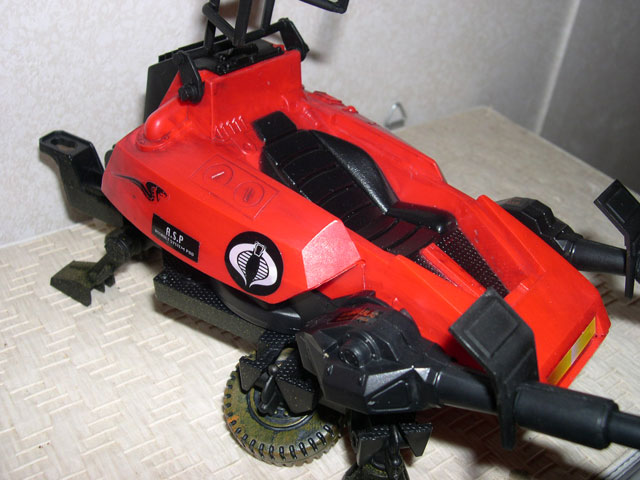 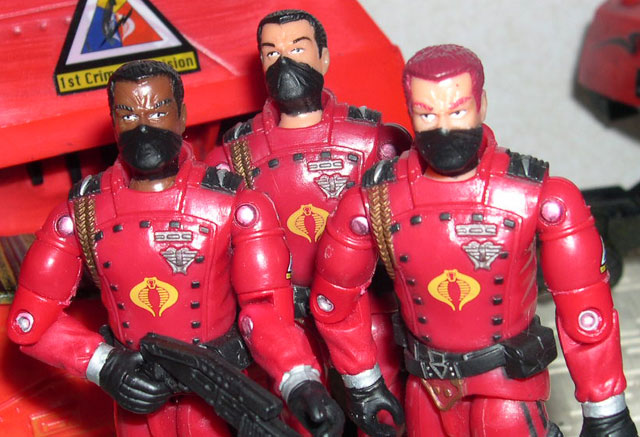 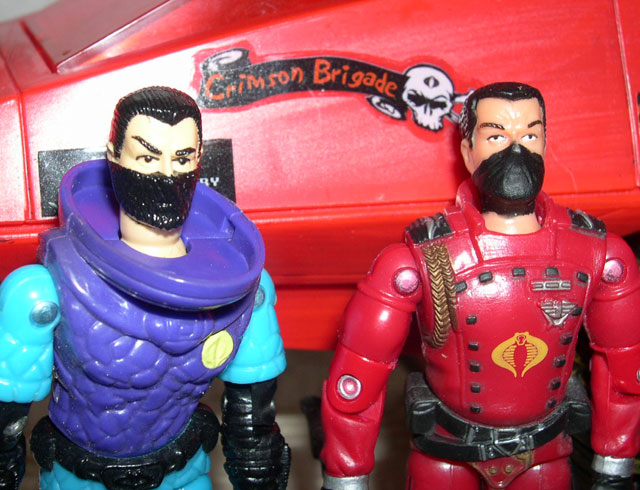 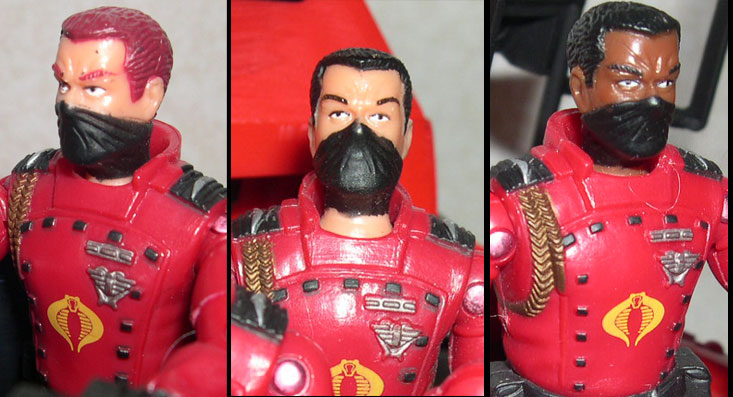 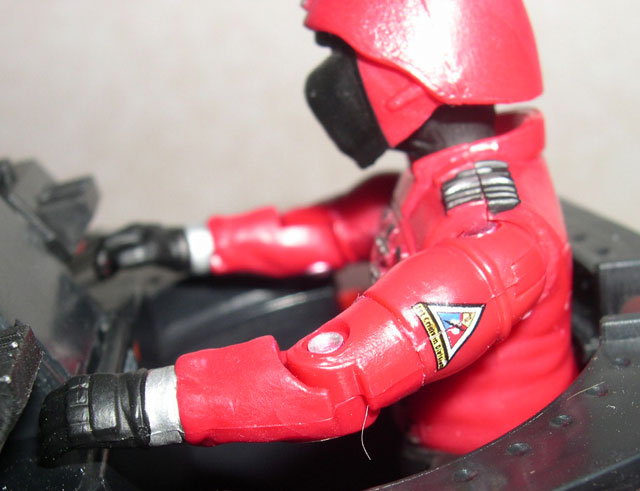 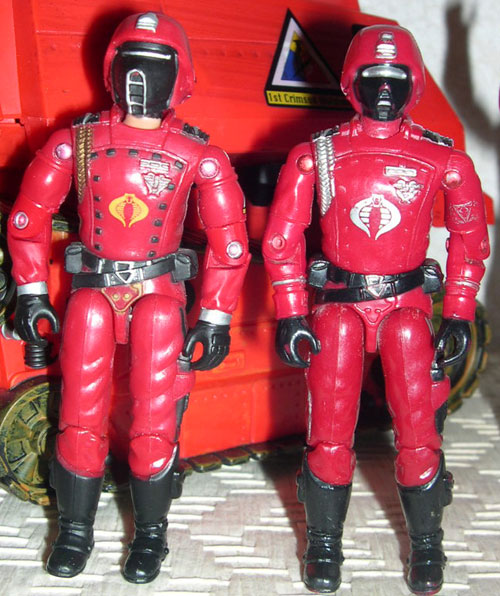 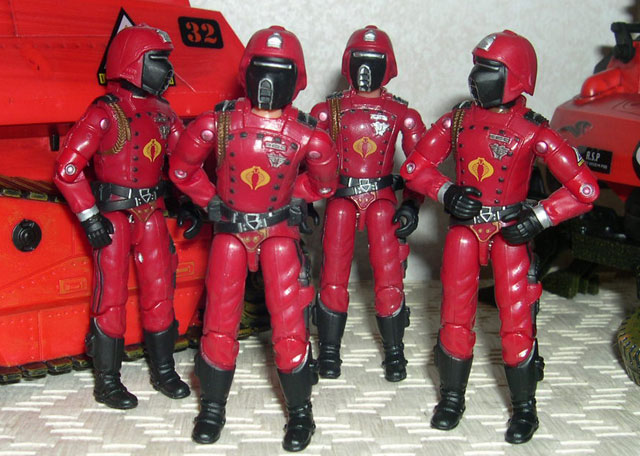 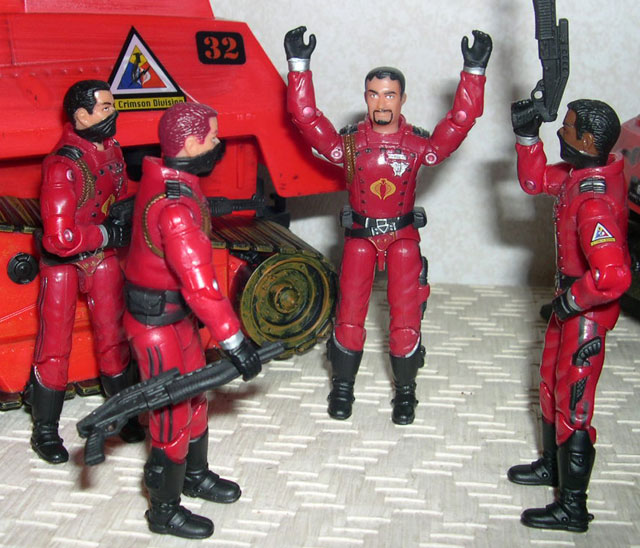