Ever since 1986, COBRA has been known by stylish battle helmets, padded vests and futuristic equipment they use to dominate the regular armed forces and further their goals. Who would have known all of this would come from a rag-tag group of masked terrorists in Fritz helmets and plain blue uniforms.

This year, COBRA goes back to the basics, and a HUGE way. 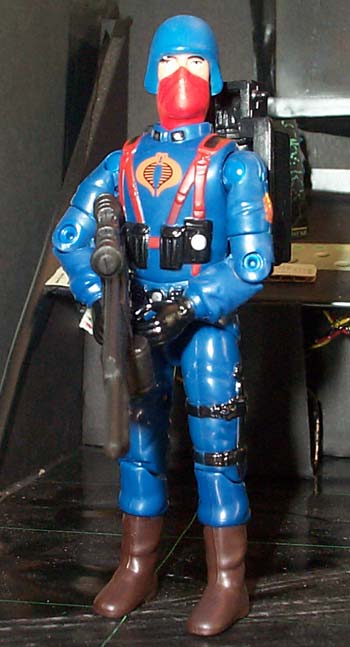 Somewhere along the line something happened. My guess it was around 1986 somewhere, with the introduction of Dr. Mindbender, the COBRA Viper troopers and ultimately, Serpentor. Somewhere during this time, COBRA transformed. They changed from a low-budget, underground group of terrorists to a technologically advanced super-terrorist nation.

At first, their only weapon were hastily equipped troops in blue uniforms, helmets and bandannas wrapped around their faces to hide their identities. Life was simpler then. There was COBRA Commander, COBRA, and COBRA Officer, and that was pretty much it.

But is simpler better? Not necessarily, but still, a flashback to these earlier days is welcome and appreciated.

As anyone who has spent thirty seconds online knows, army building is an ever-growing concept, but has been something Hasbro has only been slowly accomodating. COBRA troops were often paired with G.I. Joe figures, making troop building combersome and expensive. Well, the Big "H" is getting the point, and they are hitting their absolute stride with this set.

First of all- the figures' molds. Like it or not, these days, the 1982 series molds are, quite frankly, outdated. The skinnier torsos, simple strapping, and only slight uniform adornments are trademarks of the original series of G.I. Joe (and COBRA) figures, but things have come a long way since then. Bandanas and helmets are replaced by streamlined battlemasks and body armor, with elbow pads, kneepads, thick boots and padded gloves. These old school COBRA troopers are troopers from a simpler time. Does that mean they don't fit in here?

Thankfully, the answer is no.

I am quite surprised, actually. I was certain that it would be hard for me to integrate these remade older style figures in with the newer, bulkier stuff, but surprisingly the fit is near seamless. These COBRA troopers are meant to be slimmed down models...they exist to carry what they can on their backs, strike quick and disappear. These are the grunts, they don't need layered kevlar and comm units built into their helmets, they just need the basics. In my world, COBRA is starting anew. They've done what they can do with their current resources and are now branching out and recruiting again. This means a lot of new blood, and a lot of new folks in plain blue uniforms and helmets to strike at the enemy quickly.

In 1986, it almost seemed as if the role of COBRA Infantry had passed along to the Viper. He was, after all, called "COBRA Infantry", but in nearly everyone's world (at least I think so) the original COBRA's still had their place. The Officers are the behind-the-scenes guys who patrol COBRA HQ and strategize, hidden from the front lines. They have been with COBRA from the start, and know the operation inside and out. They assist in developing plans, organizing recruitment and even training. So where does that leave the lowly COBRA Troopers and Vipers? Where do they fit together? It's a tough call. Suffice it to say, COBRA only has so much money, and cannot equip EVERYone with body armor and battle helmets. The Vipers are the grunts of the forces, but they're the armored grunts. The COBRA Troopers are the lackys, the toadies, and the cannon fodder.

I can see COBRA moving into a middle eastern town for recruitment...they gather together thirty willing participants. Are they going to start divvying out thousand dollar uniforms and battle armor to these guys to spread the COBRA word? Nope. They move in with blue uniforms, helmets, and simple masks, equip the locals and you're all set. These are the troops the Commander doesn't care about. They are the expendible assets. So it would make sense that the COBRA Troops far outnumber the COBRA Vipers, which, upon the release of this set, I have no doubt they will do.

But I've been talking a lot about the function of the COBRA Troops. So, how does this set work within that realm?

Hasbro took the familiar look of the COBRA's from cartoon and comic form and morphed them into a remake that retains the great, classic appeal of the originals, yet still adds a nice new flair. The body molds look exactly the same (with the exception of the arms, which are from a different figure entirely), but the paint applications are really where these figures shine. The blue is a nicer, richer shade, less dark and more appealing. The chief COBRA Officer has a nice bright red mask, which a number of the COBRA troops in the comic wore instead of the trademark black. The boots of the officers are brown instead of black, and the strap colors on the two officers are nicely changed and mark a difference in rank between them in a great way.

In fact the chief officer doesn't seem to be a numerous officer at all. He definitely looks more like the character from the comics, Scarface. His small scar running over his right eye is an indication of this homage, although it isn't mentioned specifically anywhere. This is a great nod to a classic character that has never received a figure in the past, but it's not so obvious that this figure cannot be used in any other capacity as well. Very neat move by Hasbro on this one. 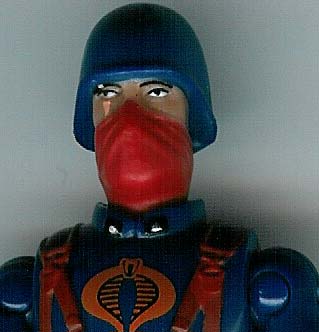 The paint masks are not elaborate, but are just VERY well-placed and well-used. Aside from the straps, the collars have nicely adorned buckles, and for the first time, these COBRA Troops have clearly defined rank chevrons on their arms! A VERY cool touch, indeed. The four troopers have the single chevron, while the one normal officer has a trio. The chief officer (or Scarface, if you prefer) has what appears to be possibly a "Master Sergeant" rank Chevron, although it's tweaked for COBRA. These are all VERY nice touches and add a lot to what would have already been a much loved figure set. 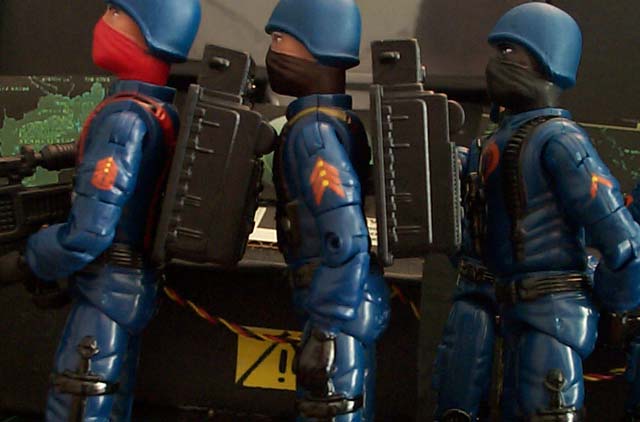 But the other arm isn't bare either. To keep these paint apps symmetrical, Hasbro has placed a VERY cool looking COBRA badge of honor of a sort. The shield and COBRA symbol combine to show an awesome little patch, which I would love to start seeing on more COBRAs. It's a very cool touch and I love what it does for the figure. 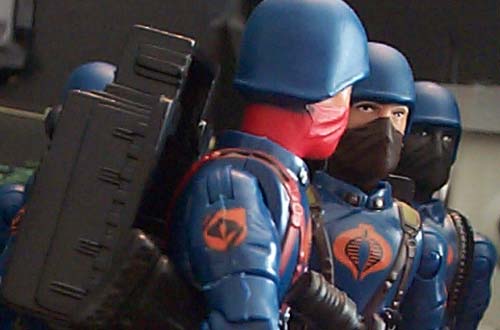 As a matter of fact, there aren't enough good things I can say about this particular set of figures. But there is one thing in particular I'd like to focus on next- the head sculpts.

I don't think anyone will disagree that the head sculpts of old looked a little...well...bland. Those blank stares and flat facial expressions really didn't give the figures any personality or make them stand out in any way. Not only that, but with the exception of different colored eyebrows (and only slightly different) everyone really looked the same. These new heads are fantastic. Sure, the removable helmets would have been nice, but honestly, these molded ones look so great there is no way I'm going to complain. The heads are slim and defined, unlike the originals, and just seem to have a lot more character and detail. The contours of the face are better sculpted, the wrapped masks are nicely molded, and although I've heard some complaints of crossed eyes, mine all look nearly perfectly painted.

Add this to the fact that they gave these troops some different ethnic backgrounds and you have one heck of an army-building set here! You can stop by Toys R Us, grab 4-5 packs and have an instant squad of COBRA lackies to do your Commander's bidding. It's almost a no-brainer.

But, of course, unfortunately, Hasbro doesn't seem to be able to do anything quite to perfection. The COBRA Troopers come with a horrible assortment of weapons. Those huge, lumbering Rock Viper rifles just don't fit in with the quick attack commando look of these troopers, and the SAW Viper backpacks just do not work. What pains me is that if Hasbro had merely put the backpacks that come with the Alley-Viper (classic sculpts) and the AK-47 w/ scope that everyone and their brother seems to come with, this set would have been perfect. No complaints at all. Instead, we have to re-equip each trooper as they come out of the box, and if some people get the numbers they claim they will get, we'll be running outta weapons pretty quick. :)

But in the grand scheme of things, that's a fairly small complaint. The figures are all fantastic and fit in far better than I thought they would. Hasbro could have a huge hit on their hands taking established figures, only tweaking them slightly, and then releasing them similarly to their old concept. I think a lot of collectors would scoop them up. Buy this set without hesitation. Weapon replacements aren't too hard to come by, and these six figures are worth the investment. Amass your armies, give Toys R Us your first born and wait with baited breath for Hasbro's next uber-army builder pack. Let's hope they're Crimson Guards, eh? 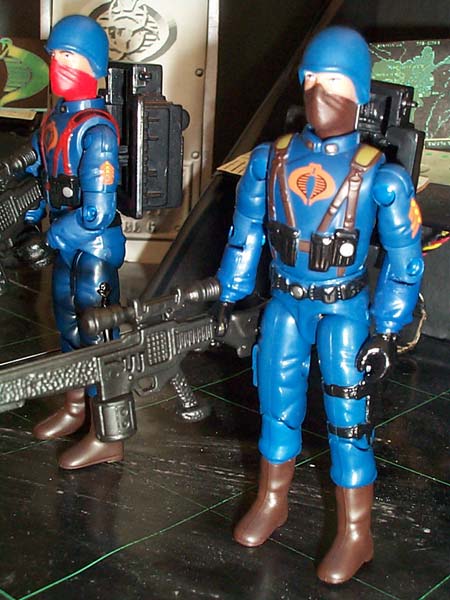 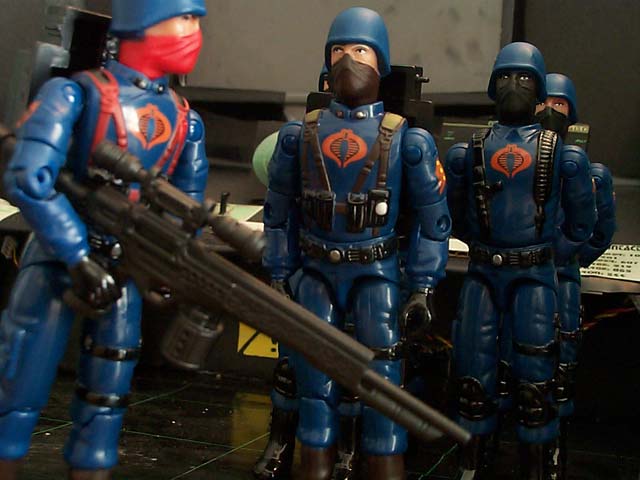 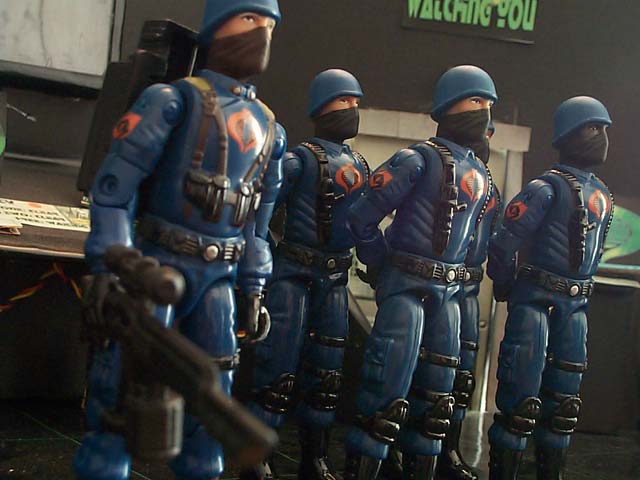 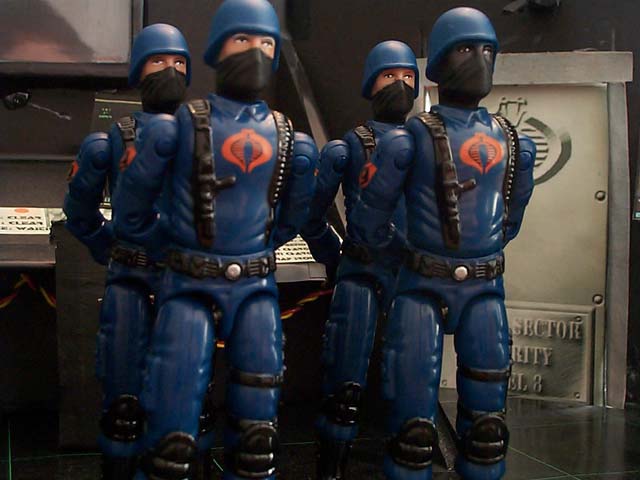 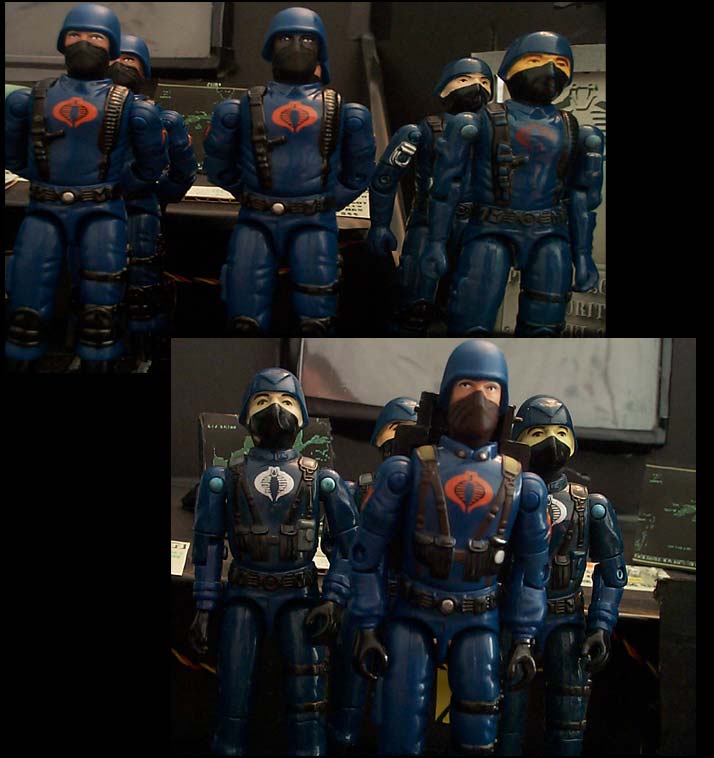 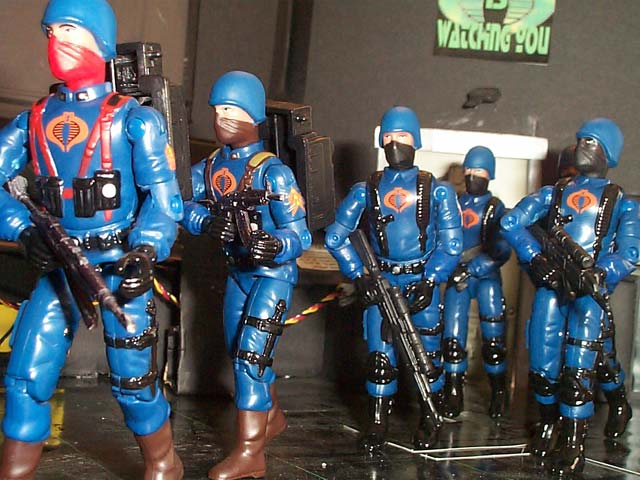 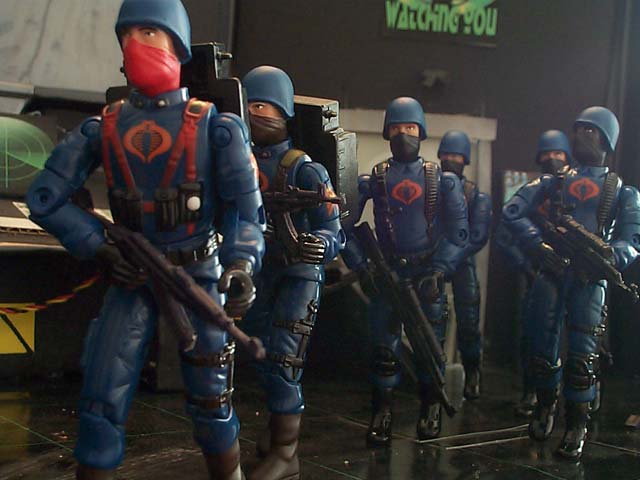 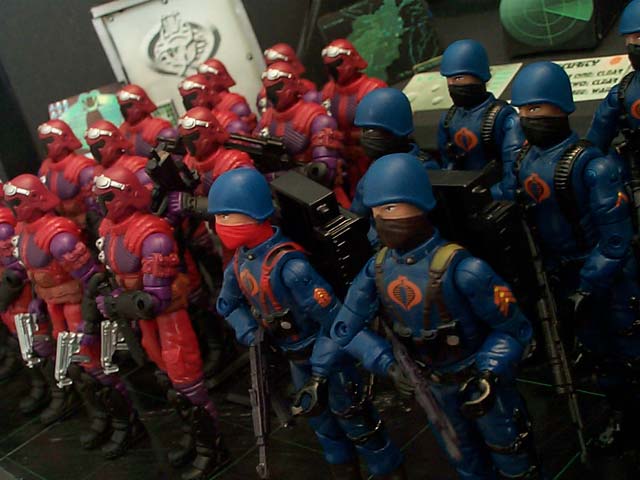 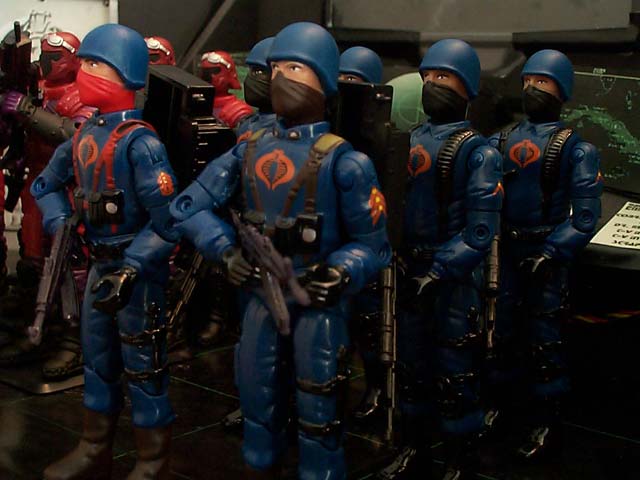