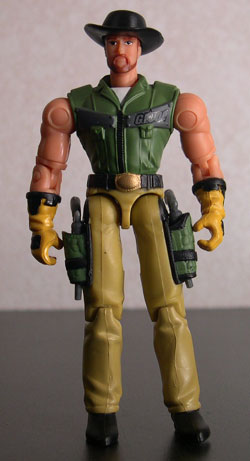 So, it took us nine months to get the first three waves of figures out and about this year, and now we've doubled the amount of waves in a scant three months since. For some folks, the constant stream of product is a very welcome, very cool thing to see...some people don't like it at all, for monetary reasons and for the hassles of the search. Me, I fall somewhere in between.

Money is a little tight these days, especially around the holidays, so cobbling together a pretty large sum of money to simply keep up with ongoing figure waves can be a chore. Since I do most of my shopping online, I don't really need to concern myself with the time it takes to hunt figures down, so that's a relief at least...of course for myself, any time saved by online shopping is used up by the review process, but it's a choice I make for myself, so I can't really complain. ;)

So first on the chopping block is Wild Bill, who hasn't been seen since...well...Wave 3. That figure was among my favorites for that wave, so how does this one stack up?

Moldwise, it really should stack up as nicely as the previous version did, but points are lost merely for repetetiveness. This figure is still nicely sculpted, and has a cool western-style shirt, yet manages to maintain a Joe-like look with oversized armored gloves, snakeskin holsters, and some cool understated armor plating on his chest, complete with detailed rivets.

The figure over all is exceptionally simple, which is great, especially in these days, when a lot of the figures seem almost over-detailed. His sleeveless shirt and bare arms work together well, and even though the large gloves look a little out of place, I still like them a lot, and they add some nice character to the figure. His pants are very simple straight-leg khakis, which work for his Texan background, and still look cool.

The head sculpt is great as well, and they brought in a full beard...while different from Bill's original moustache, this still looks like he should look...much more so than a goatee, any way.

This is obviously where the figure differs compared to the original version. Honestly, I definitely prefer the original color scheme to this one. Not that this one is bad per se, but the original colors just seem brighter and more vibrant. The tan pants look like realistically colored khaki slacks, and the shirt still has that green color, but a little bit blander than the original. The dark highlights look a lot nicer in the original, although I do much prefer the snakeskin holsters on the new version. It's kind of a mixed bag, but overall, I definitely prefer the color scheme of the Wave 3 Wild Bill...this one has nothing much that improves upon that one, especially not enough to buy a whole new figure.

The accessories here are very similar to the original as well--a very nice removable cowboy hat and a terrific pair of sharpshooters that fit perfectly in their holsters. This figure also comes with a heavy machine gun for a kind of unknown reason, but with the weapons that make sense, I definitely approve. The colors of the original accessories, like the figures themselves, are a lot better with great silver hues instead of a kind of plasticy gray like these new weapons are. Overall, still more to love about the original compared to this one.

Overall, I can't really think of a reason to recommend this figure. It is a nice one, but the original should still be fairly available on shelves, and I would much more readily recommend you pick that one up instead. If you simply cannot find the original, or don't want to spend time looking, this version makes a suitable substitute, and is still an improvement over previous versions of the figure, but not good enough to overcome the coolness of the Wave 3 version. 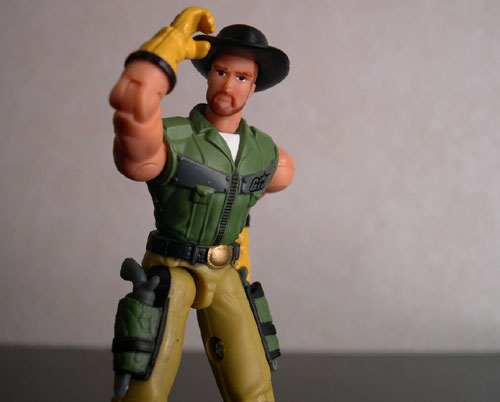 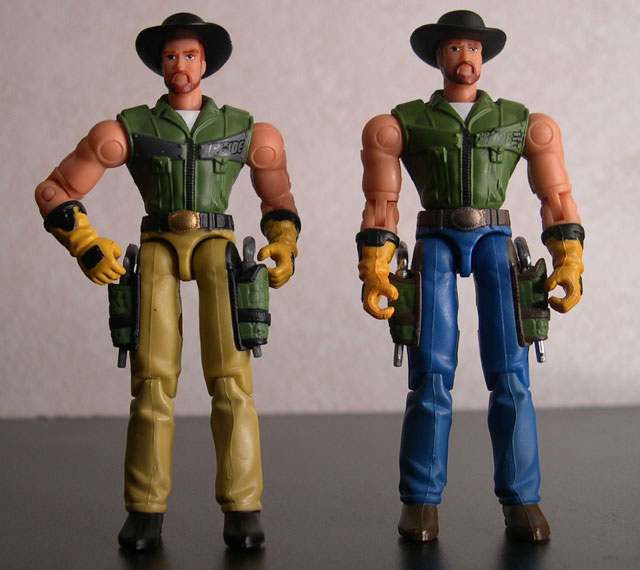