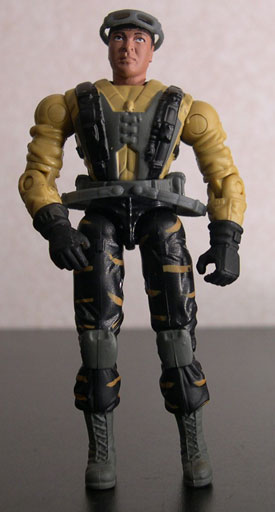 It would almost appear that Tunnel Rat is the new Snake Eyes/Duke of the G.I. Joe world. He appears in nearly every subset out there in one form or another, and is now getting the repaint treatment when the original only appeared in Wave 3 (notice a trend here?). The Wave 3 version was pretty horrid, in my opinion, and even with some color tweaks and the addition of a huge honkin' squirt gun, this version does not really make me any happier.

First of all, Tunnel Rat was the focus of many fans' anger and many of Hasbro's promises regarding a "standard buck" and trying to keep figures in scale. The Wave 5 TR was one of the tallest figures out there, which earned some flak, since back in '87 when Tunnel Rat first appeared, he was always represented as someone of smaller stature.

Well Hasbro proudly proclaimed that the new Tunnel Rat would reflect that smaller stature, and he does, to their credit. But the mold is still pretty much crap, in my opinion.

The head sculpt isn't bad, and captures the likeness of the figure well, but the torso is a jumbled mess of straps, wrinkles, buckles, and mis-matched detail that just doesn't fit together quite right. In Wave 3 they added insult to injury with a neon green shirt color and bright yellow straps. At least here they changed the green slightly (although it's still extremely bright) and toned the straps down to black. I thought back then that a change in color might be all this figure needed...well, I was wrong.

Overall, the figure, even with some slightly toned down color pallets, still just stinks. And it's not even something I can necessarily explain in pictures...to me, the essence of a cool G.I. Joe figure is in it's playability...how it poses, how it moves, how it works. An important part of dio-making (and pictures for these reviews) is how the figure can be realistically positioned...it's one of the main draws to these figures for most of us, I would think. Well, Tunnel Rat just doesn't feel...right. His legs flop around lazily and don't stand well...his arms feel short and stumpy, and don't seem to work right with any weapon I try. The whole figure just feels clunky. Whether it's due to a different mold scale for the shorter figure, or if it's just because of the design of this particular mold, I just don't see myself using it at all. The colors don't help any, and the rest of the boring mold is just icing on the crap-cake.

As I already mentioned, the color scheme of the original Wave 3 Tunnel Rat was pretty near painful...this one is less so, but still doesn't do anything to wow me. The base shirt color, instead of being neon-green, is instead a bizarre puke-green/tan shade that just looks strange, with zero accented detail beyond the twin black straps. Black pants with light green stripes slapped on them barely seems even like camouflage, and all other color accents are either strange, dull, or a little bit of both.

I think it would just be best if Hasbro left Tunnel Rat alone for a little while, because he just seems to get dug into a deeper and deeper hole that not even he can dig his way out of.

Remember that big honkin' squirt gun I mentioned? Yeah. It's a big honkin' squirt gun. A rubber, fill-up backpack with a thick, unmovable hose, and a massive water cannon that's pretty much the size of the actual figure. These all combine into something that Tunnel Rat can't even HOLD much less operate...and I don't even know what it's supposed to be. I'd imagine it's some sort of anti-venom water-launcher, but nothing on the package says so...man, why couldn't he just come with the paintball gun like the other guys?

Besides this contraption, he has his same goggles from the last version, and a nifty little survival knife, although it's not a new mold. Oh yeah...and you can assume that all of the Joes here come with that funky little communicator/knife holder do-hicky, although I don't bother to mention it any more. ;)

You can very safely pass on this figure, although the Razorclaw he comes with rocks the house. I almost wish Razorclaw wasn't quite so cool, so I could heartily not recommend this pack at all, but with improvements on so many aspects to the old version of 'Claw, unfortunately, this pack is still one you might want to consider...unless you're not a fan of shameless Wolverine clones. 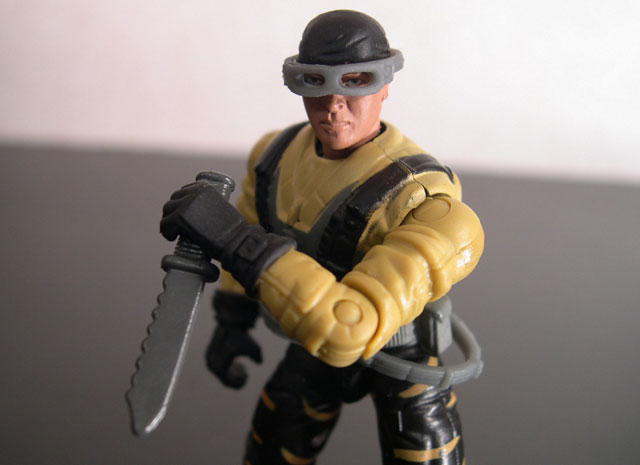 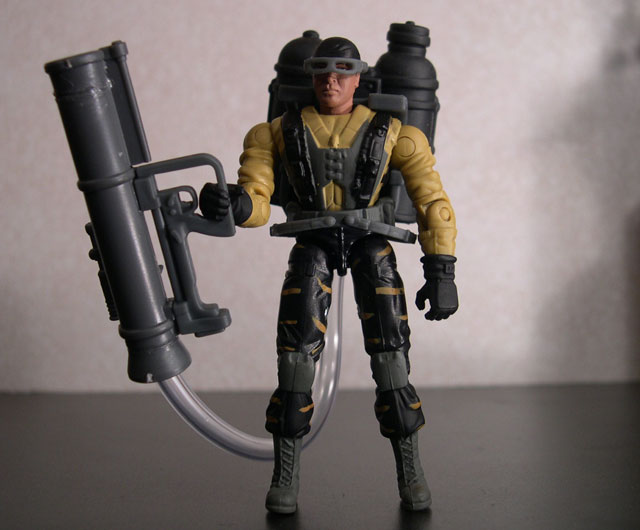 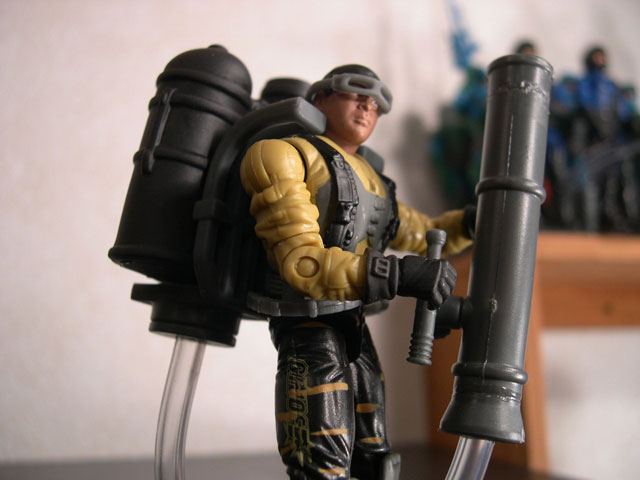 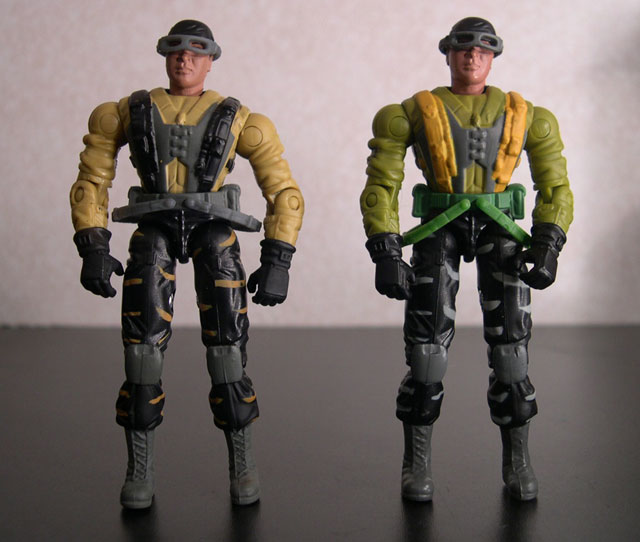