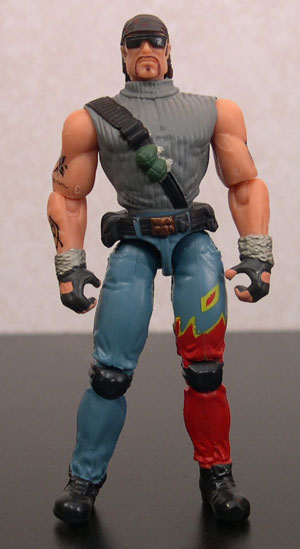 Well, I'm extremely happy to report, this new articulation looks seamless and offers absolutely no degrade in articulation that I can find. And it's not just a rivetless shoulder, either...the "swivel arm" battle grip is pretty much gone, (as has been happening on some other figures already) replaced by a swivel joint on the elbow that still allows it the same movement capabilities. Not only that, but the elbow is now sculpted into the arm, so it looks extremely realistic and moves as a real arm should. A great, great new jointing system and a very effective sculpting design!

Of course it also helps that this overall mold kicks all sorts of butt. The head sculpt is definitive Torch with his sunglasses and dinstinctive facial hair. The wrap around bandana is terrific and really brings an 80's motorcycle punk into the more modern era. His torso sculpt is excellent as well with a nice, layered turtleneck making him look big and broad-shouldered and adding a very nice pattern. It's adorned with a single simple strap holding a pair of grenades among other things and is excellent in its simplicity. Fingerless gloves are always appreciated, especially in conjunction with quilted shirts, and I LOVE the little chain detail around the wrists...that just rocks.

And the detail just keeps on coming...from the skull-pattern belt buckle, to the nice kneepads and very effectively sculpted shoe-length blue jeans. Torch is another great example of simple molds being extremely effective...this guy looks like he could exist in the real world, and the figure looks terrific. Even the heavy duty studded boots look great...

I spoke already of the new arm articulation, and let's just say I'm extremely excited to see this go a little more mainstream. I'm hoping with the new storyline, this articulation will become more standard and will serve to give us a much more consistent arm sculpt and shoulder proportion. Torch looks great and moves perfectly, with no distracting rivet or oversized shoulder.

Another place where this figure absolutely rocks! His overall gray/blue color scheme is quite reminiscent of the Wave 6 Ripper, which is very cool, as it kind of brings the Dreadnoks together. All colors seem to fit as they should in the places they should, but added details like the tattoos running down Torch's right arm and the flame detail on his jeans just make this figure GREAT. These little painted details are often not thought of and it's much appreciated to see them here and with terrific execution to boot. It all looks just as it should.

Torch comes with a backpack/torch/flamethrower combination and it's actually a pretty neat idea, even if it is somewhat oversized. The hose and backpack fit together seamlessly and the torch looks realistic, with a pilot light included and even a translucent red flame accessory! It fits on the torch perfectly and looks awesome.

Sure, not a lot of accessories, but what he has really counts and looks great.

This is the reason why the last two waves have kind of bummed me out. Don't get me wrong, there are some GREAT new paint apps and retools available now, but look at this Torch. Look at how absoultely COOL this figure is...he is GREAT. I just wish Hasbro had the resources to put out an entire wave of figures like this, but alas the market these days probably just doesn't allow it.

Still, Hasbro does deserve some serious praise for what they are doing sculpting-wise to both improve upon existing figures and when you look at the new stuff they're coming out with. I can't even imagine the types of stuff we'll be seeing next summer at the next convention...there could be some amazing things on the horizon.

Anyway,this figure is extremely cool, and definitely pick up this set when you see it...Bazooka is another great figure and with the pair of them, it almost makes this pack the best of the wave.

Overall, Wave 6 has been a terrific wave. It has numerous similarities to the last non-repaint wave, Wave 4, and seems to hit on all the right cylinders like that one did. If I had a complaint, it would be that we're not seeing more NEW figures, but it is tough to find fault when nearly every figure in the wave is almost a vast improvement on an earlier version. From minor paint changes, to fixing action attack, to even completely resculpting a figure, Hasbro has done some terrific things with this wave...it just makes me impatient to see them start tackling completely NEW waves of figures with this same sculpting and attention to detail. I only hope we don't have to wait until the next storyline for that to happen. 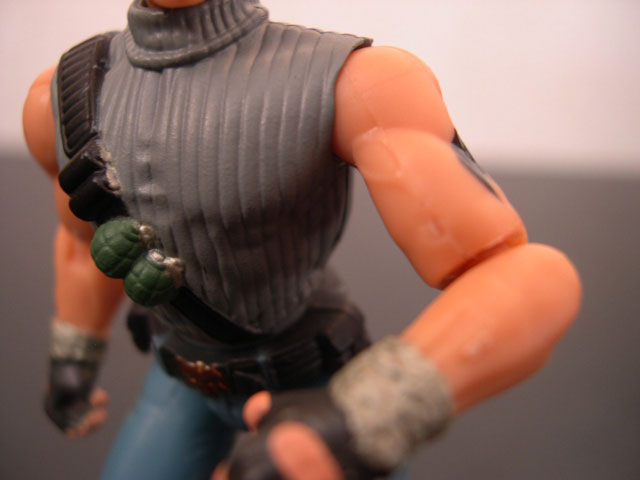 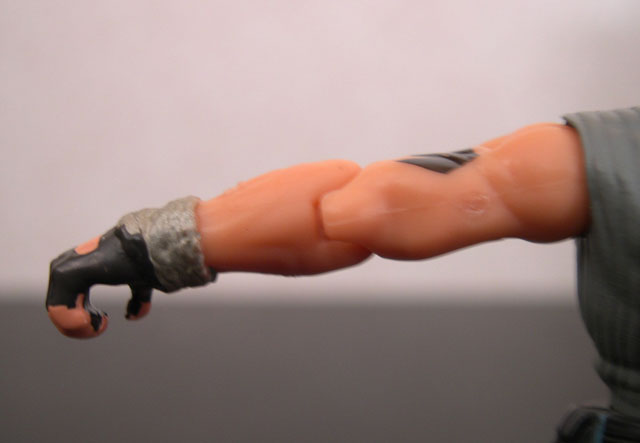 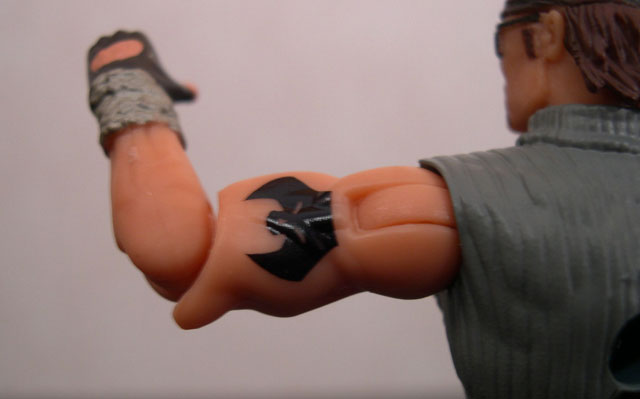 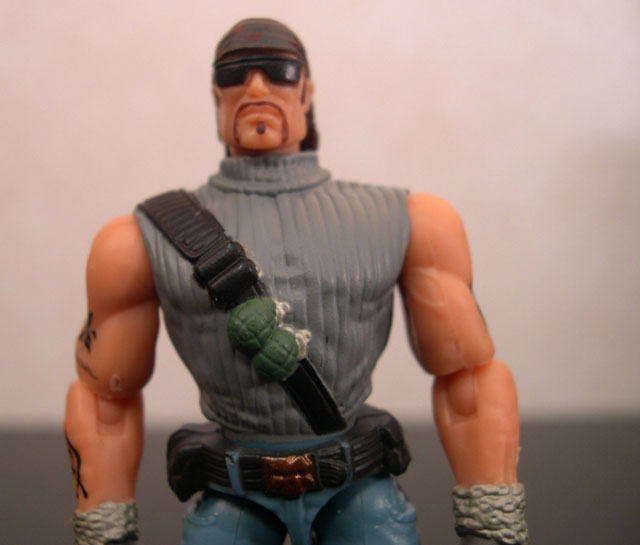 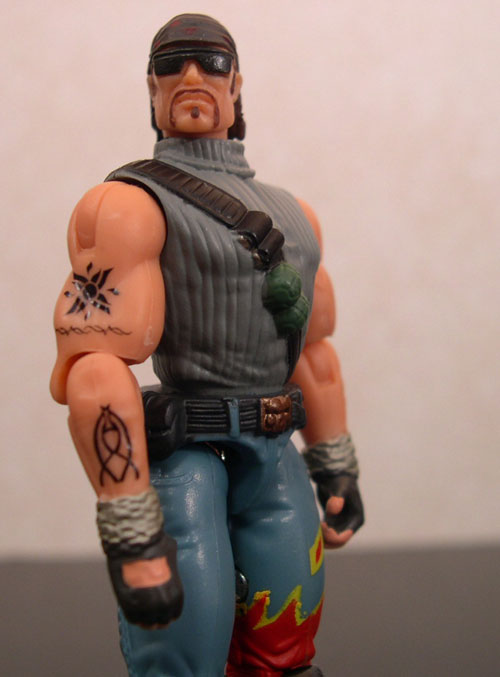 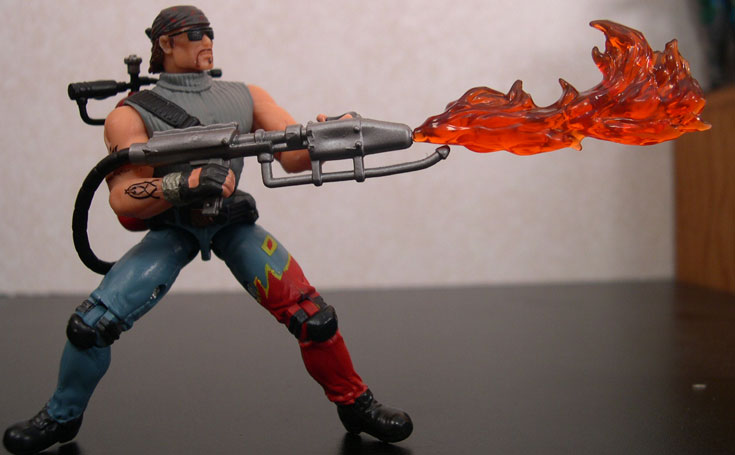 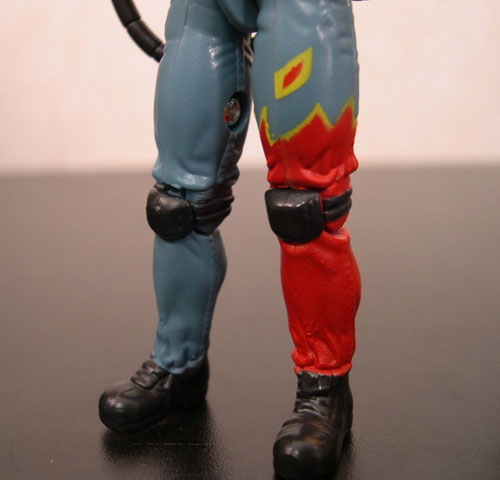 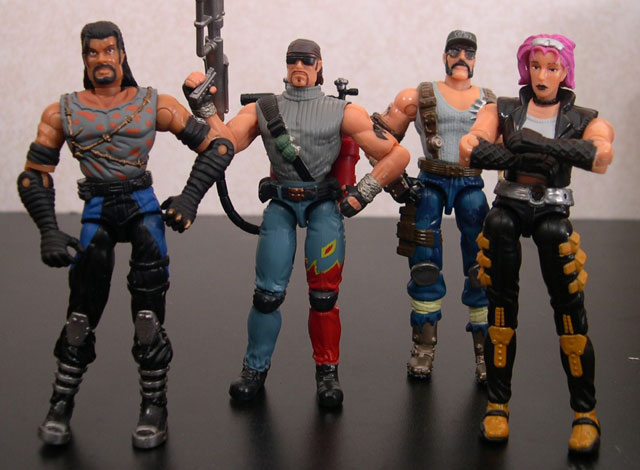