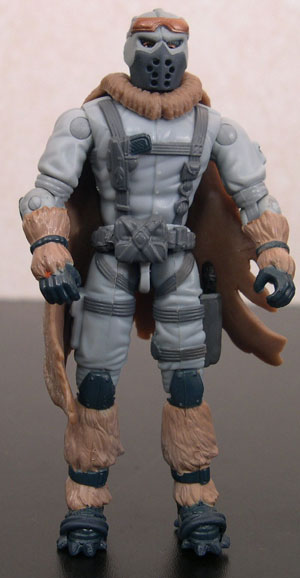 As much of a Joe fan as I am, it takes a lot to really make me drop my jaw and express all out awe at how nicely sculpted and executed a particular G.I. Joe figure. Especially in these current days when sculpting and detail so so prevelant in all toys, 3 3/4" or otherwise...a figure like this is just perfect in it's simplicity and fantastic in it's execution. My only slight downside is that he's basically a remake of an existing character or figure...and it's one that has been released three times over the past couple of years. Plus, he's an arctic figure...a fantastic figure of this caliber is one I should be able to use any time and anywhere...I just hope Hasbro can focus this type of awesome energy on more widespread troops and figures in general.

This mold is just amazing. It is blatantly obvious that it takes a LOT of inspiration from the Snow Serpent/Snow Wolf mold...but something I didn't even realize until I got it in my hands...every part of this mold is NEW. It's not a retool or a resculpt, it looks completely sculpted from the ground up, most likely using the same design, but with a lot of improved sculpting and proportion, we end up with quite possibly the greatest COBRA arctic trooper ever released. Yeah, and that includes the original Snow Serpents as well. This figure is incredible.

We start off with a head sculpt that has been used before...it belongs to the BTR Firefly. But a generic ski-masked head like that completely works in pretty much any environment you want. The fact that it's an arctic trooper only makes more sense. The head is intricately detailed and looks terrific...and is covered by an excellently sculpted, rubberized Snow Serpent-esque helmet that fits well and looks great. It even has cut out eyes that actually match up with the eyes underneath! Excellent!

The body mold is plain, but nice, with the same baggy snowsuit look and strap organization. The cross straps on the chest are more tightly crafted than before, although the holster on the chest is still on the small side. Arms and legs are where this figure most shines in comparison to the older versions, with actual normal sized hands and feet, so he can be used as a normal Snow Serpent/Snow trooper and not just a freaky mutated dog-person. The fur adorning his arms and legs looks terrific as well and blends in with the arctic look as nicely as it possibly can. The parachute pack on his stomach is larger than previously, and better sculpted, and the legs even pull serious inspiration with the cross-leg parachute straps as well. The metallic kneepads and full-length fur pantlegs look even better than the rest and one of the coolest aspects--where the Snow Wolf had a molded holster on his left thigh, this version has an actual empty holster that fits the pistol that he comes with. It's the same pistol that the Wave 3 Firefly came with (that went into his chest holster) and although it's a tight fit originally, once you get it in there, it fits snug and looks fantastic.

Then you have the sculpted fur cape...the original was pretty neat looking as it was, but the dynamic sculpting and cool color pallet of this one blow it out of the water. While it doesn't have the frosted fur look of the last one, the way it's molded and the way it wears is heads and shoulders better than the previous one...pretty much everything about this figure is better. Even the parachute pack on his waist is rubberized and removable like the skirting on other figures! It's a tiny little attention to detail, but what a great idea and great execution!

The colors here are quite simple, but also very effective. The dull light gray base uniform pattern is almost perfectly complimented by the darker gray straps and belts. The darker color of the gloves, skimask, and boots looks terrific as does the burnished metal hue of his kneepads. One of the highlights of the color scheme here is, as has always been, the tan fur color of his gloves and pantlegs, really bringing a nice bright, yet realistic look to the figure. Perfect in almost every way.

Snow Wolf's accessories are kind of stealthy...on first glance, it doesn't look like much...really only a removable pistol, helmet, and rifle. But then you realize the snow shoes can come on and off, the cape does the same, and even his little parachute pack (although you have to take the figure apart to remove that). So really, this figure is PACKED with little accessories that perfectly compliment him.

I'm somewhat torn, as I said in my Razorclaw review. The sculpting and execution here are dead on perfect, but I almost wish this much attention to detail could be paid to new characters and new sculpt figures. Not only that, but arctic figures only have so many uses, and even though this figure is fantastic, I just don't see many opportunities to use him, which kind of hurts.

Regardless, though, he is a great figure to own and comes with a darn cool Frostbite as well, so don't hesitate to pick up this pack if given the chance. 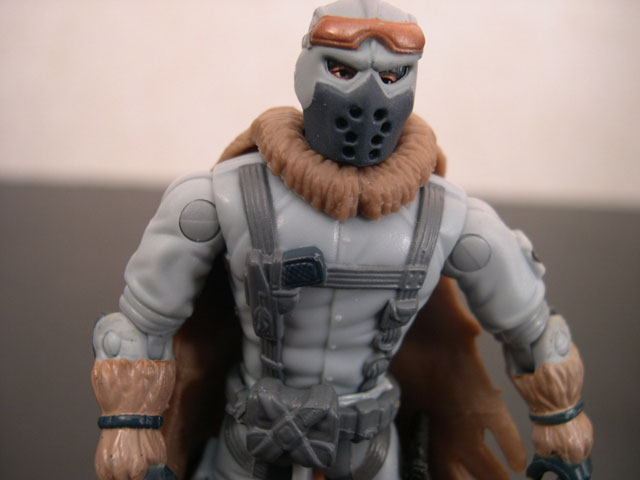 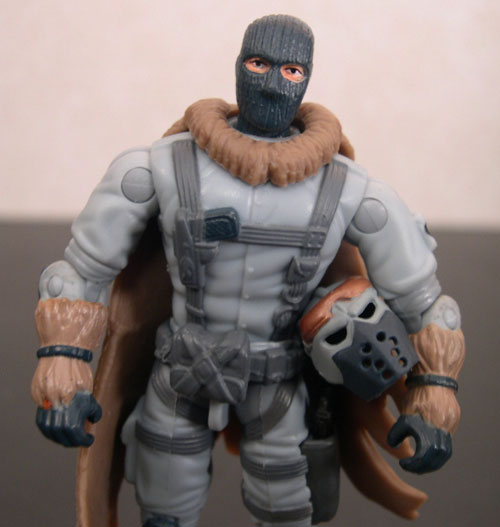 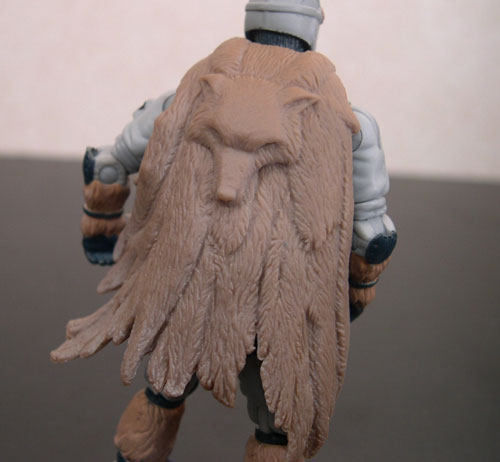 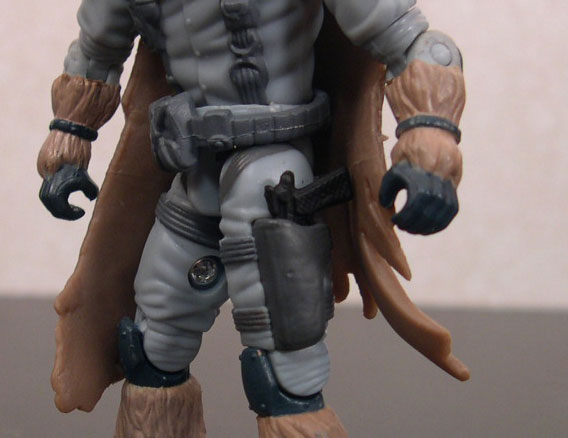 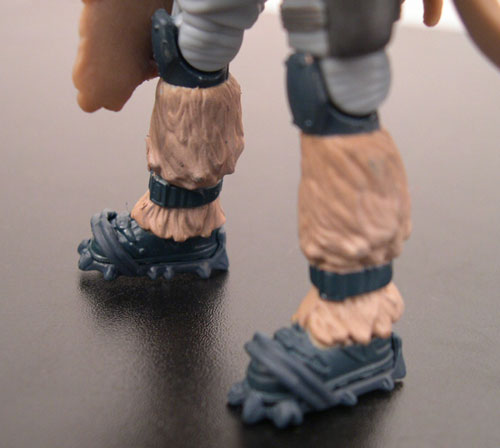 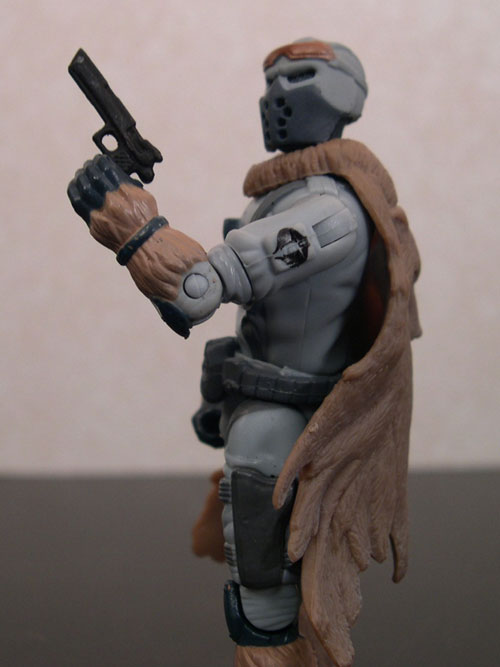 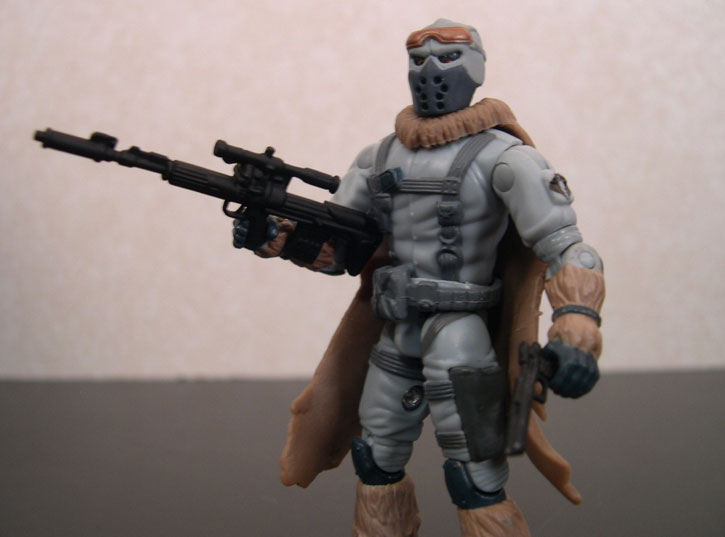 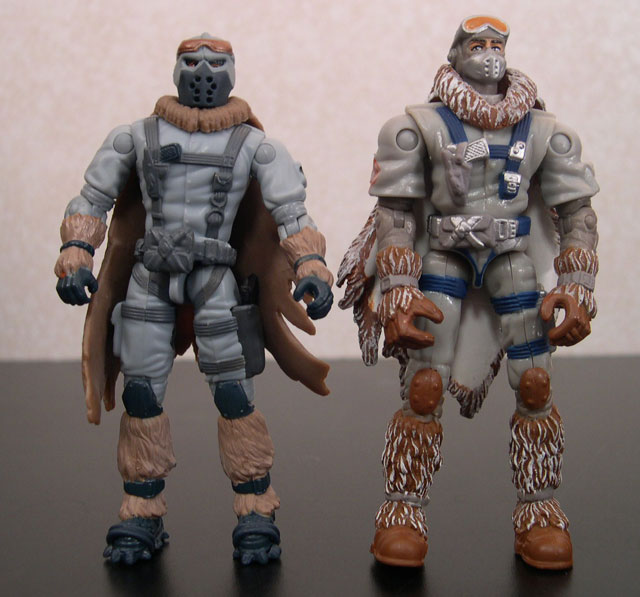