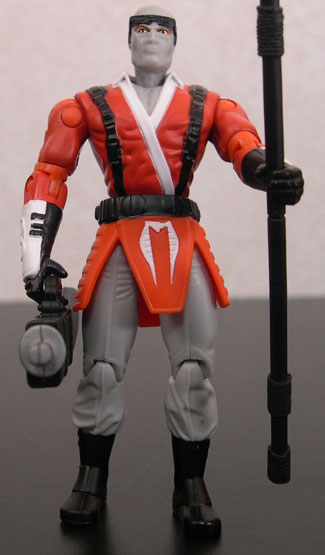 Somehow over the past few years the COBRA ninja world got shaken up a little bit. The always-prevelant duo of Slice and Dice has evaporated and been replaced by the ambigious (to say the least) duo from Valor Vs. Venom- Slice and Slash.

I can't help but think that Slash was meant to be Slice and Slice was meant to be Dice/Slash, but filecard mix ups got the names swapped around somewhat...Slash's back story/personallity seems oddly similar to the original Slice's, and the new Slice's is nothing like it should be...perhaps more fitting with Slash.

Regardless, the new COBRA ninja duo had some pretty funny moments in the new Joe cartoon, and I find myself really looking forward to integrating them into my new Joeverse...whether or not they'll be so... "friendly" in my world remains to be seen...I wouldn't count on it, though!

Slash was a figure originally eluded to several waves ago, originally supposed to be released alongside Tunnel Rat in Wave 3. Prototypes reveal that to begin with, Slash was going to be yet another spring-loaded Action Attack figure, but thankfully his delay in release has ended up converting him to O-ring goodness, which is great, because the figure itself is really pretty neat and would have stunk if saddled with AA.

Hasbro manages yet again, to take a step towards the more simple, and instead of overbearing detail and cramming a figure full of straps and belts, we get a very smooth, non-cluttered modern martial arts uniform and it looks very cool and COBRA-esque.

The head sculpt starts it all off, with a skin tight ninja mask complimented by some sleek, scientific looking goggles...it breaks up the smooth mold nicely and adds some functionality to the figure as well. The torso is great as well, with a basic, classic martial arts top, trimmed off by two thin straps over his shoulders. They add some nice detail without taking anything away. Like Hasbro has a habit of doing, they spice up what would be a very straight-forward mold with some oversized, armored gloves, which are successful here like they were with Wild Bill and adds some heft to the figure. The rubberized skirting is effective, too, with some nice angular designs...unfortunately, the skirt does effect articulation/poseability in a negative way, which is too bad. Not as bad as Kamakura, but not nearly as non-invasive as Storm Shadow or Slice. It's still nice, but this does put some points on the negative side.

The pants are plainly sculpted as well, but work for the figure, especially as a martial artist.

The paint apps are pretty normal, but very effective with a basic light gray undercoat and excellent red shade for the uniform top. Colors are rounded out nicely by black boots, black gloves, and some cool white trim on the aforementioned gloves, giving them a nicely armored look.

The white trim also runs along the uniform top, and creates a very cool COBRA-type design on the skirting...nicely effective and different color patterns.

Again, Hasbro seems to be taking new accessories a LOT more seriously in the last few waves, and COBRA Slash is no different. He comes with a pretty cool sword that separates into twin halves and fits nicely into a briefcase-type sheath that he can carry. Excellent new weapons and a cool way to transport them...gives him a very "hired gun" type of feel...I can just imagine him walking into a scene, Desperado style, dropping his case, whipping the swords out and going crazy.

He also comes with the same separated bo staff that the Wave 4 Storm Shadow came with, another pretty neat new sculpt weapon.

Slash isn't amazing or mindblowing, but he's a cool, solid ninja figure with some interesting design dynamic and somewhat different paint applications. Hasbro's focus on ninjas has gotten pretty intense lately, but if they keep making cool figures, who am I to complain? So far, with the Wave 4 Storm Shadow and Kamakura, the Toys R Us Ninja Strike Team, the upcoming Ninja Battles set, and these two figures, you're getting a pretty nicely sculpted set of martial artists.

This figure fits right in and works very well in that regard. For ninja haters, you may not want this pack, but for people who just like decent figures, and aren't too bothered by the ninja aspect, this is a decent enough set to get. 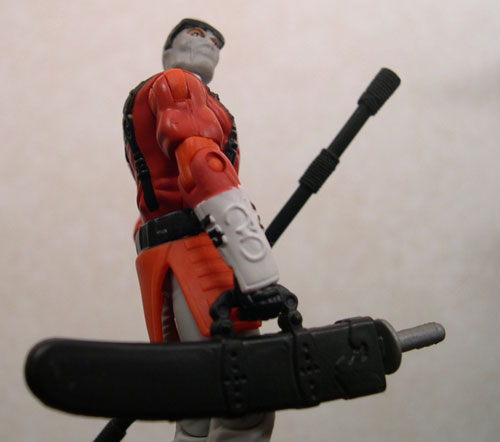 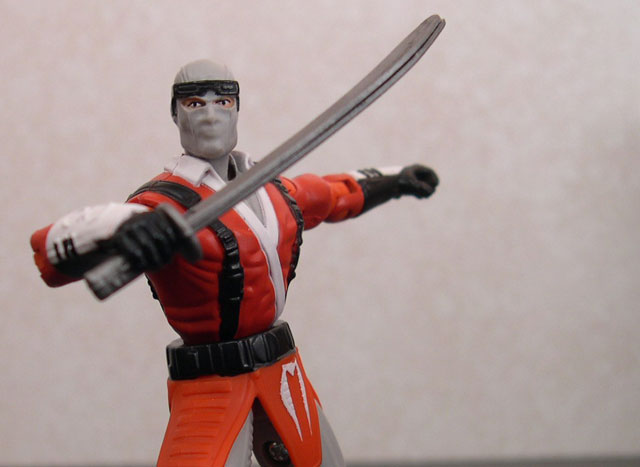 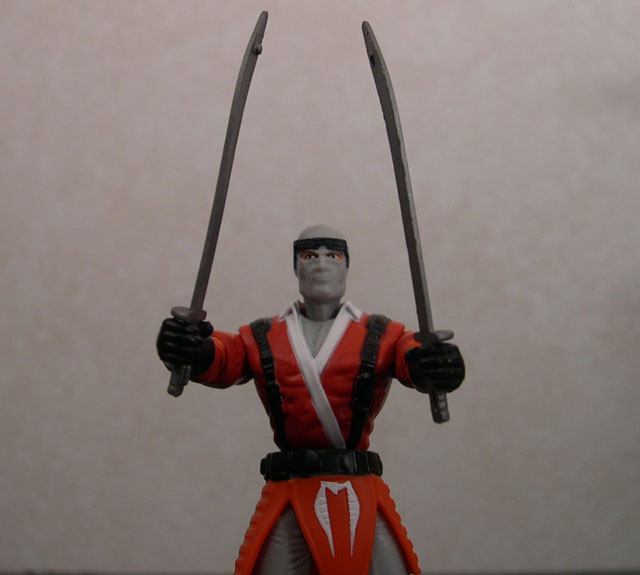 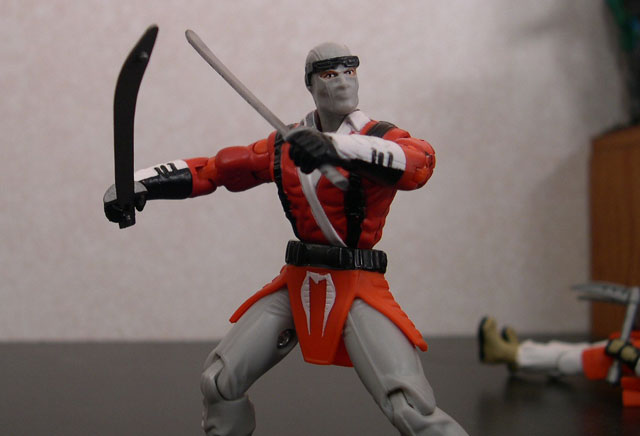 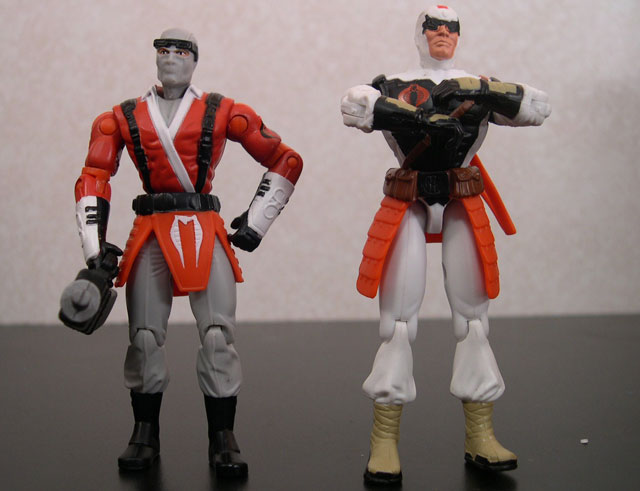