I think there might be something wrong with me...I mean who gets this obsessed by what is, in essence, a kids toy? Something like this just...bugs me. I don't know why, but it does. This figure would make a PERFECT land gear Wet Suit...PERFECT. But for whatever reason (I guess Hasbro lost the trademark since 2002) it ended up as Shipwreck back when the Pirhana boat was originally released. At least the red hair was fixed, and really, this figure's face sculpt DOES look like Shipwreck, but I still long for my long-awaited land gear Wet Suit, and my retentive nature will not let me use this figure as Wet Suit...*sigh*

The mold here is just as cool as it was with the Pirhana boat. An awesome basic military design, something quite rare in new sculpt Joes these days. He wears a normal baggy BDU-style uniform, with a sleek flak vest over the top of it. Pouches are situated in all the right places.

Small touches like fingerless gloves, the removable hat, and terrific details in the cloth wrinkles really bring this mold to life. Unfortunately, he does suffer from some proportion problems, which is too bad, because the figure could be downright fantastic. As it is, it's a pretty cool figure, but not quite at fantastic stage yet.

This is really where this figure shines in comparison to the original. Back then, he was glad in all dark blue with white camouflage, and the pattern looked really cool, but was not that distinctive, especially among the black flak vest and straps. It just kind of all blended together. With this figure we have a wealth of different colors which brings this toy to life in ways that the previous version just couldn't do.

The base uniform is a nice green hue...not your basic olive drab, but not so different that it doesn't maintain the military feel. It still definitely feels Army/Navy/Marines, and works well as a jungle operations trooper. The off green camouflage splotches are applied well and come in a nice color, which while not very realistic, they still at least look neat, which is important these days. His shirt is just plain green, and it's really on the vest that the paint apps come to life. With a black base, the vest stands out far better on the green than it did on the blue...yet, there is also a great leathery brown color for the straps and pouches that further compliment the torso. His gloves are black, as they should be, and the camo pattern returns on his hat, something else that works well for the figure.

Thankfully the hair on his face and head is now brown instead of red, so he can't be accused of being Cutter any more (a comparison I never understoond any way. This guy looks about as much like a Coast Guard guy in a baseball cap as it does a Sailor with a parrot) and like I said, even with this minor change, his facial sculpt much more resembles Shipwreck now. Although I still wish it didn't...I don't see Shipwreck in this type of operation or this type of uniform...and have wanted to see a Wet Suit like this for so long, that if Hasbro had merely gotten somehow creative with the name, I would have sung their praises (even more than I normally do ;)). I also have this issue with Sgt. Bazooka of this same wave, which really, honestly IS Zap...there's no other way around it. Unfortunately, I have this complex which doesn't allow me to get creative with names that Hasbro assigns...perhaps I can finally overcome that malady, though, since I so want this to be Wet Suit and him to be Zap.

A pretty simple compliment, but one that works--he has the removable hat and backpack, same as he came with originally. But now he also comes with Sgt. Hacker's terrific machine gun and the same paintball gun that Frostbite had. Cool! A nice, small assortment of accessories, but the important part is that they make sense. I like. Well...except for the fact that we were finally supposed to get a new Polly with this figure...the bird has suddenly disappeared, which stinks. But since this is Wet Suit anyway, I guess that doesn't matter. ;)

While I have some personal problems with the naming convention here, the figure itself is cool, in spite of proportion issues. His new jungle op paint apps and more detailed flak vest bring a whole new life to the figure and make him quite a bit more appealing than he was when he came with the boat. Not really a mind-blowing figure by any stretch, but a nice, solid one with great paint apps and nice accessories. Plus he comes with a very nicely deco'd Electric Eel, which is always a plus. 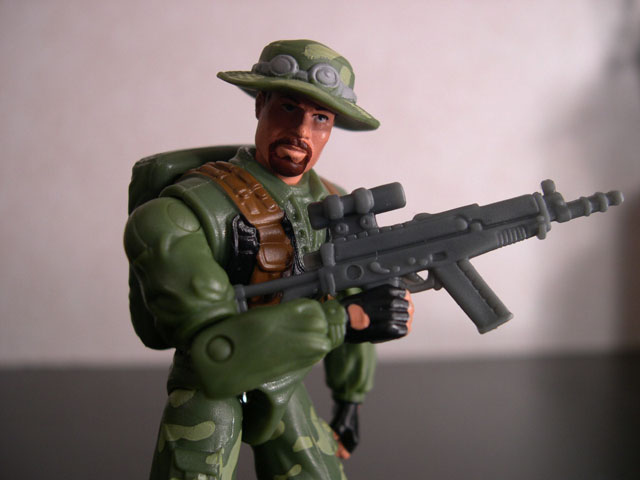 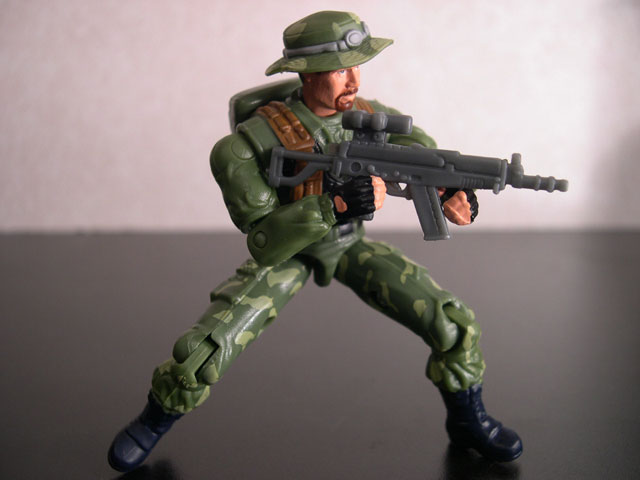 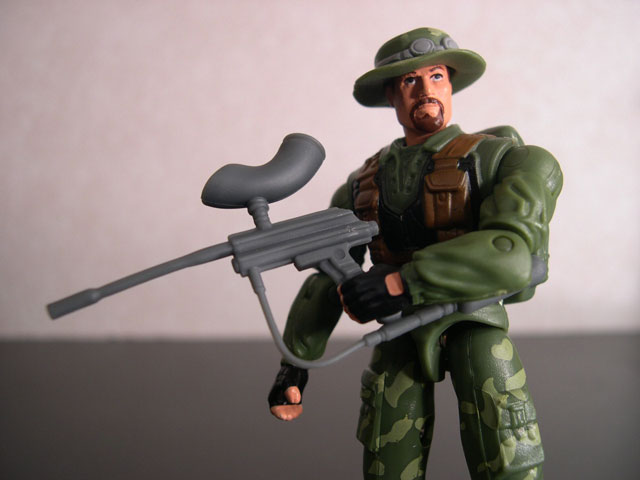 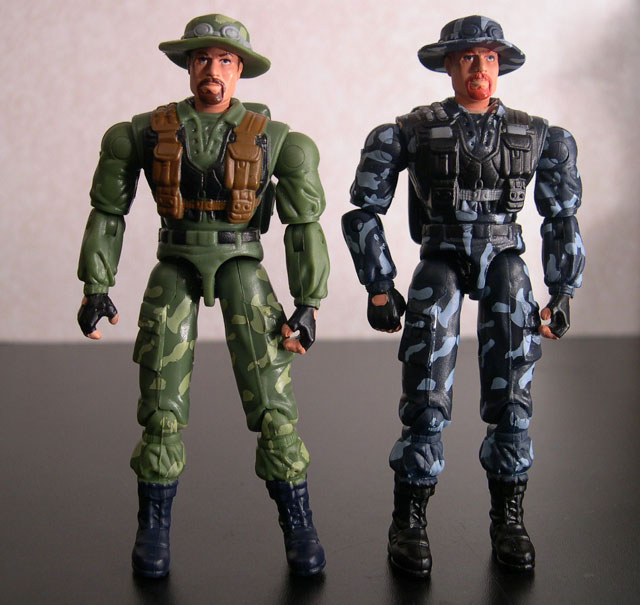