In my review of the Viper, I mentioned the success of Hasbro's new sculpt army builders over the past couple of years. They've been somewhat mixed, although in Valor Vs. Venom, I think we've seen more poor than decent COBRA troops.

One of the army builders done right so far is the VvV Viper figure, a great update to the original with some nice modern flair. I think the same of everything applies to the Tele-Viper in the Spy Troops line.

That figure was extremely successful in pulling a lot of elements from the classic version--the quilted vest, the helmet/goggles combination, and for that figure, even the color scheme seemed to be pulled from 1985.

So is this new update as successful as the repainted Viper is? Yeah, I definitely think it is.

Like the Viper, the Tele-Viper treads that proportion line. He has lanky legs, long, bulky arms/hands, and a somewhat short torso. But, also like the Viper, it doesn't seem to take away too much from the figure as it might with some others. It actually doesn't bother me much at all here and I really find myself liking this figure, almost better than the original.

His head sculpt takes many cues from the original, but the goggles look more menacing and the face sculpt is more determined than the "goofy chubbiness" of the '85 T-V. His helmet is laced with little technical details and mixes with his removable helmet-mike perfectly. Even just looking at the head sculpt, you can tell this is a communications trooper, right up front.

His torso, again, pulls inspiration from the original, with a quilted vest buckled at the torso and looking nicely detailed. the padded look on the shoulders combines with the almost leather look of the rest of the vest and adds some great flair to his torso mold. His arms, while long and somewhat big look nice, and I enjoy the pattern of the short-sleeves.

His legs are pretty plain, but have some nice pouches sprinkled throughout and I really love the COBRA symbol on the belt buckle. Overall the mold has a nice combination of plainness and added sculpting, and really comes together pretty well.

Again, like the Viper, his base uniform color is a really neat gray shade. While this doesn't mix with the rest of Python Patrol well, it mixes with Viper very well and the two troops in this set look to make a great subset of their own.

The gray is offset by black trim here and there, mostly on his vest, but also on his belt, boots, and assorted patches. This black color really darkens the look of the figure and makes it look even better. The red criss-crosses on the vest and pouches brings another cool look to the figure, taking the Python Patrol elements and enhancing the figure well. He meshes with the TRU Python Patrol somewhat, but more stands out as his own figure, which is fine with me.

To add even more color Hasbro pulled another page from the PP book and gave him some gold accessories and very slight gold details on his belt. With the shoulder pad comm unit a full gold color, it adds some great bright hues to the figure and looks great.

Tele-Viper comes with all of the same accessories he did back in the Spy Troops line. A removable helmet microphone, shoulder pad-comm unit, walkie talkie, and street sweeper shotgun. All of these accessories are nicely detailed and well-sculpted, and serve the Tele-Viper very well. The coloring is nicely worked in, too, giving his comm gear a gold color, but keeping his weapon black.

A good figure to be certain, and without a doubt will be a strong draw of army builders. This two-pack should prove to be a success, and it really should be. Both figures are common COBRA Troops, and both figures stand out as their own troops, not necessarily having to work with Python Patrol only.

These are two pretty popular COBRA troops, and the fact that they're packaged together will only enhance the popularity. It's a great two-pack, and I definitely recommend it, probably the highest recommendation of the Wave. 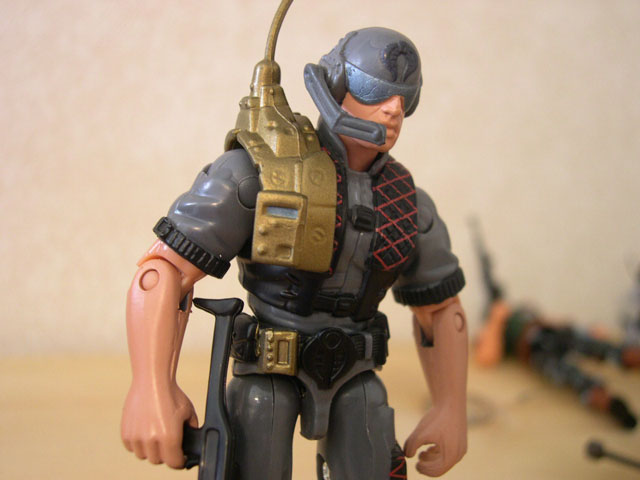 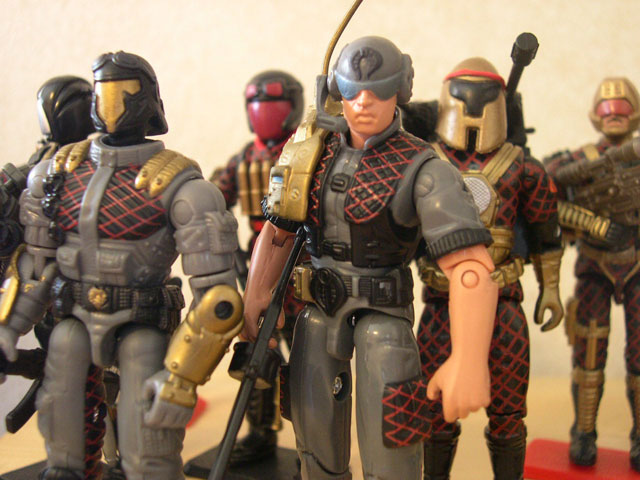 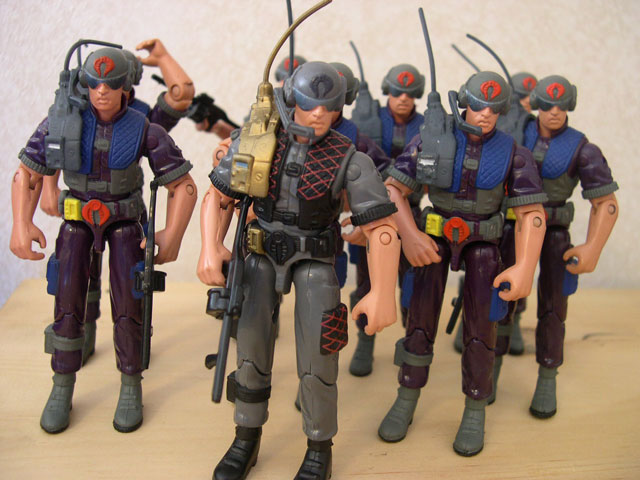 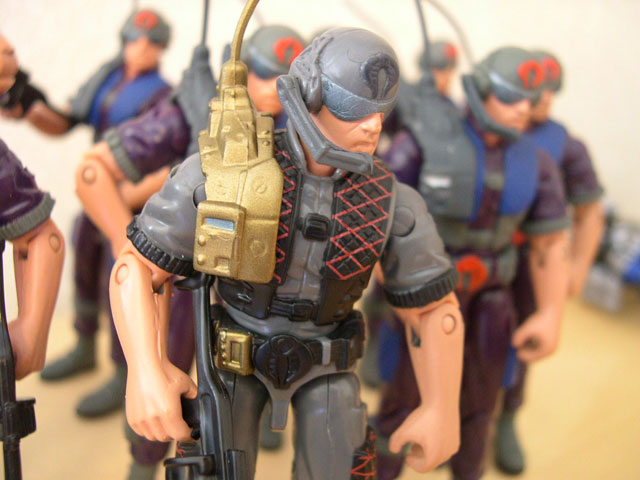