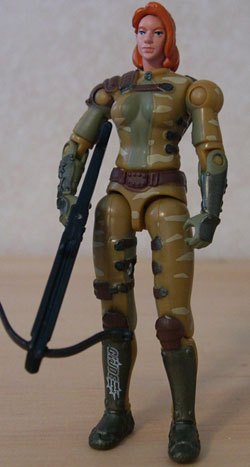 It took Hasbro just about 20 years to get us even a halfway decent Scarlett...and now they seem to be in the groove. My personal favorite female Joe got the short end of the stick for a long time. Her first release was the definitive one, and looked okay, although the head sculpt was aweful and she lacked the long hair that quickly became her trademark in all media outlets. Her only classic sculpt update managed to take care of the hair problem, but unleashed a whole new series of problems with the Ninja Force construction and lack of articulation.

Well, happily, with the 2002 version, Hasbro managed to get it pretty right on the money, and in my mind, is still the definitive version of the figure. However, the Valor Vs. Venom one isn't too shabby either, and this one follows in it's shoes pretty nicely.

This mold has the distinction of being one of the most feminine molds in the Joe mythos, in my mind. Besides the original Baroness figure, Hasbro had a way of making their female figures look a little less than female. While the original new sculpt Scarlett didn't have this problem, she almost seemed to go the other way, becoming a little TOO feminine, if you get my drift. This figure strikes a decent balance between the two, looking like she should, without having Beverly Hills-type proportions.

This version of Scarlett is a pretty huge departure from typical military looking very "super hero-ish". She's dressed in comic-book spandex with buckles and layers, complete with oversized gauntlet-gloves and huge, round kneepads. She could just as easily be found in the pages of X-Men as in the pages of G.I. Joe. Believe it or not, this isn't something I mind. Kids like super heroes, and to a lot of the younger audience, that's what the Joes are, so this look isn't as much a departure as folks might think. I like the way Scarlett's uniform is portrayed here, and I think it suits her pretty well.

Her proportions are pretty spot on, too, not suffering from either the original Scarlett or the Wave 7 Lady Jaye measurement issues. Her shoulders are a little large, but her shoulder pads mask this nicely. I like her new hair-do, abandoning the ever-popular ponytail look, yet still maintaining her long hair and a feminine appearence. Overall, the figure mold here is as successful as it was back in series 1.

Personally, I really loved the color scheme the Wave 1 Valor Vs. Venom Scarlett got...it was a major departure from her normal paint scheme, but the lighter green and gray trim fit her really well, I thought. Nothing against the tan and deep green...those colors work nicely, too, but I just liked this updated color pallet...it was something different, but still pretty appealing.

This new paint scheme is...well, somewhat less appealing. The "Desert Patrol" is obviously a new subset Hasbro is diving into, tieing it in with their upcoming Toys "R" Us Exclusive 6-Pack. Like the Tiger Force pack in this assortment, even though it shares the subset name, it is a completely different paint scheme and doesn't fit real well. While the TRU pack has somewhat authentic looking chocolate chip camouflage, Scarlett is just kind of different shades of brown and tan with some haphazard camouflage painted on. I do like the black trim she has here and there and everywhere...it serves to break up the monotonous color pallet nicely and brings the mold together pretty well. She kind of looks like she could pass for a desert trooper, but doesn't look like she belongs with the Desert Patrol unit she is designated for. Since I'm not a fan of desert-themed Joes anyway, I don't see myself really using Scarlett in this incarnation any time real soon.

That's not to say the figure is a complete loss...the addition of the camo pattern (as haphazard as it may be) does bring some spice to the figure and make it stand out. While the uniform doesn't really lend itself to a camouflage pattern at all (camouflage spandex?!? Eh?) the overall color pallet does look neat and could almost work in a jungle environment. Still not a whole lot more useful than her previous version, though, and that's one I'll probably stick with.

Same ones that she came with originally, from what I can tell. Sword/sheath and her cool crossbow. A neat, and appropriate selection of weapons and accessories, but nothing amazing or new and different.

As female characters go, Scarlett is definitely my favorite. This version of her isn't really bad, per se, but it doesn't do anything special for me either. The mold maintains it's neat quirkiness from the VvV Wave 1 version, but isn't really well suited to a desert environment, and the new paint decos don't thrill me either. Not really one of the better offerings of this wave but she does have some interesting new paint decos that make her stand out at least a little bit. 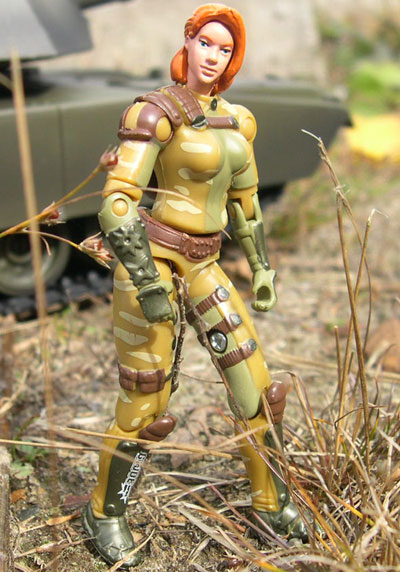 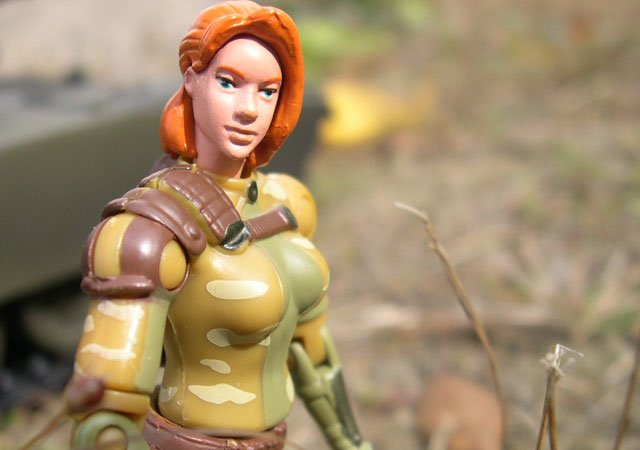 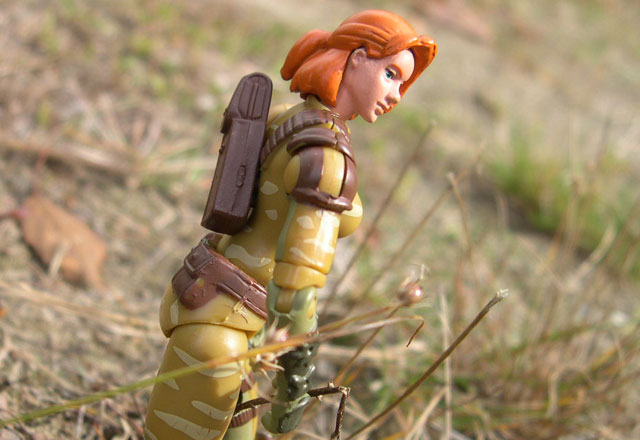 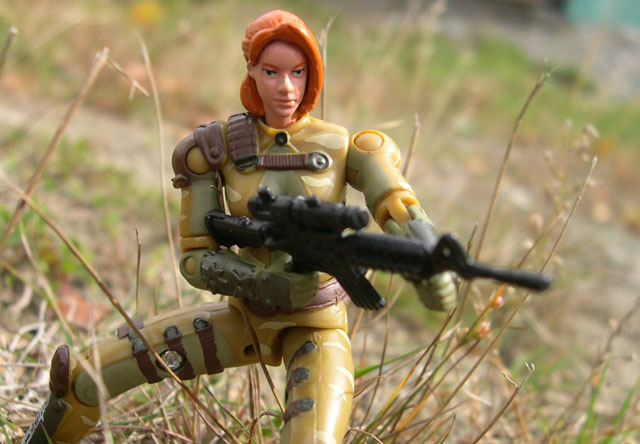