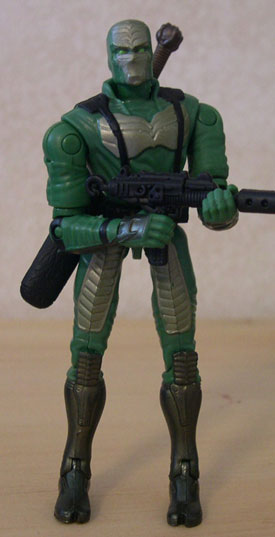 Deja Vu, anyone? Man, I feel like I just wrote a review for this figure a couple weeks ago...probably because I did. Between the Wave 4 Stormy/Target Stormy, and the Wave 4 NC/Wave 5 NC you think Hasbro's tossing a lotta ninjas at us? Well, I guess if they have to toss 'em, they might as well be cool ones. The Target Stormy is cool...this one, well, isn't quite so cool, but for you Night Creeper freaks out there (like me) it might be one you want to pick up.

I feel like I'm repeating myself, but again, the Wave 7 molds always seem to strike back. Those crushed torsos...those three times too long legs...it almost gets frustrating seeing how cool these Night Creepers could be with only some minor alterations.

Besides the proportion issues, these figures are GREAT. Streamlined ninja masks with cool as heck armor plating down the front. Those very cool detail-heavy wrinkled uniforms with yet more layered armor in just the right spots...the added articulation of the swivel wrists and pivot ankles. It all just works together perfectly, yet is hampered by the inhuman looking sculpt of the figures.

Unlike Gung Ho, though, the proportion problems are a mere nuisance for this figure and do not bring the entire figure down with them...they are a glaring problem, but in this case, can almost be overlooked by the sheer coolness of other features.

Our first new sculpt Night Creeper was a nice rich blue and silver, and it works pretty well...the second one in a more subdued gray and dull silver works equally well, only for night operations and deep cover work. This version...well, I'm not sure where he fits in exactly. His main base uniform color is green, and thankfully it's a nice, deep, dark green. The color is very appealing and interesting, and I suppose could work for jungle ops, although the Night Creepers don't strike me as jungle ops kind of guys.

The armor plating on the Night Creeper is exceptionally well done, too, colored darker than previously, and really given a bronze metallic hue. This is especially prevelant in his shins and boots and looks extremely cool.

Night Creeper doesn't come with a whole lot in the way of accessories. A simple sword and sheath, and the submachine gun w/ silencer are all she wrote. Really, it's okay, though, as he doesn't seem to need a whole lot else, and these really work well for him.

Along with the other new sculpt Night Creepers, this figure is ALMOST really, really cool. The uniform design is terrific, conceptually, but just doesn't work 100% in execution due to the proportion issues. Added articulation helps quite a bit, and the new green color scheme is pretty neat. Overall, this figure and the Ninja Trooper combine to be a decent two-pack, although I'm not sure really how much army building I'll be doing of them. 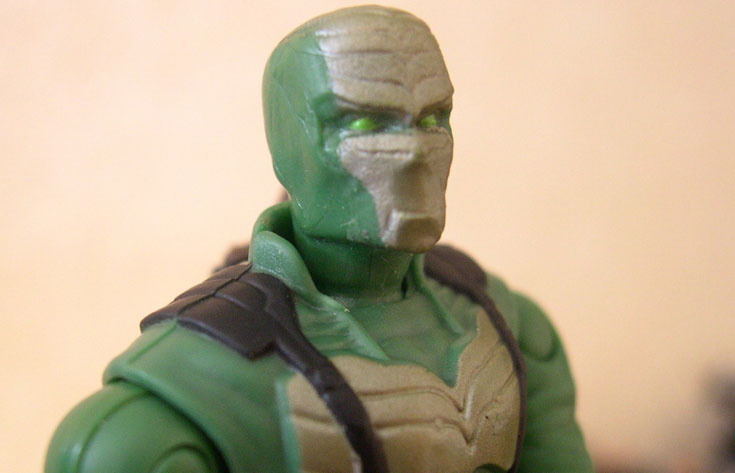 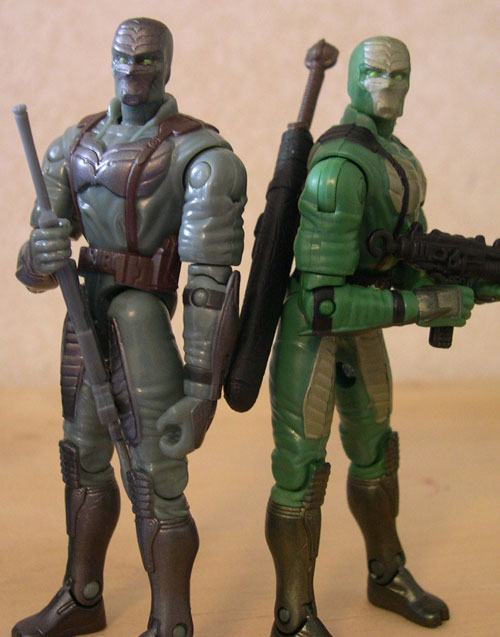 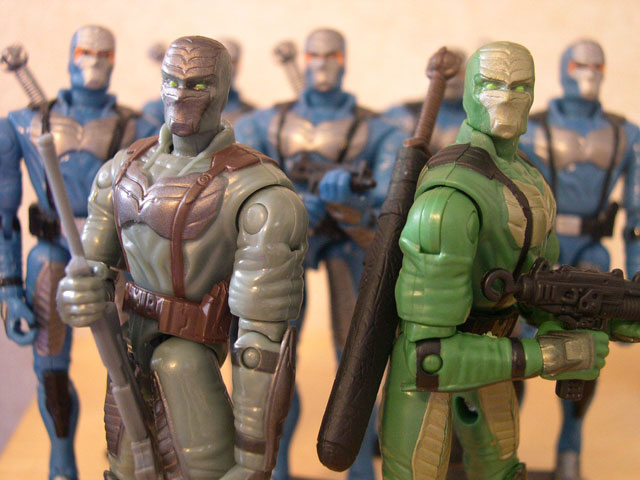