Inconsistancy, thy name is Hasbro. It's almost hard to believe that a figure like this updated Grunt could originally have come out around the same time as Red Spot, Widescope, Gung Ho, and other lanky-legged figures...and here we are, a year later, and still a figure of this caliber is released in the same PACK as one that looks downright rediculous because of their scewed proportions. Everything that Gung Ho fails at, Grunt seems to come through smelling like roses. His proportions aren't perfect, certainly, but they seem much less exhaggerated, and he looks relatively normal...in short, he is a great example of a simple, military new sculpt figure that Hasbro seems to have some problems sometimes emulating.

Again, he stands as he should...his legs are a little long, and he's a tad pigeon-toed, but for the most part, he's got reasonable, respectable proportions and limb sizes. His head sculpt looks great, and actually looks like Grunt. Considering Grunt has very little real distinguishing characteristics about him, this is a great success.

The body mold is simple and relatively un-detailed. It's slim and muscular without an overabundance of pouches, straps and overpowering padded armor. Just your basic tank top, chest holster, and strapping with grenades on them for some added firepower. His arms are mostly bare with the exception of the once-common bicep straps, used to hide joints for the swivel-arms, I'd imagine. The straps don't look bad or really out of place here...they actually serve to break up the bare arm mold nicely.

The legs share a similar success, looking slim and military, definitely based strongly on your typical army pants garb. The added kneepads serve the same purpose as the bicep straps, and separate the mold nicely, plus add a little splash of detail over what could have been some pretty standard, almost dull detailing. A pretty successful mold, over all.

So far Grunt has had some pretty successful paint decos to go along with a pretty decent mold. From basic army green military, to a more night operations-themed gray, his colors have been very plain, but also very effective. With this version, Hasbro spices it up a bit, and it is very, very successful.

His tank top is in dark green, matching up nicely with the green color from the TRU Night Force figures. The holster and strapping on his arms and chest are all a nice, leathery brown, looking realistic and nicely dark against the deep green of the shirt. His pants are done up in a great little camouflage scheme, too...while not nearly as detailed as the digital camo of the TRU set, they share many of the same color elements, which allows him to blend in nicely, yet still stand out on his own. Gung Ho shares these same nice paint applications and the figures work well together, but Grunt's mold is so much better executed that he comes across as more successful over all. The dark camouflage wash over his face is very nicely applied, too, and adds a very cool "deep ops" flair to the figure. Great application!

Grunt comes with some different weapons this time around, and they work pretty well. Thank goodness he still has his very cool helmet/goggles combination...with him in a Night Force capacity, these goggles will work very well as night vision instruments, and the dark color of the helmet brings him even deeper into the night. Some great accessories for what is meant to be an all around night ops infantry trooper.

Grunt is a very successful night ops Joe soldier in about every way possible. A cool, in proportion mold combined with some great, detailed paint decos...all topped off by a nice accessory compliment, and you've got a great new version of Grunt. While the previous versions were pretty neat, they were somewhat plain in execution...this version keeps the great mold, but adds some awesome new elements paint-wise and pulls off a great new figure. Unfortunately, it's pretty much the only successful Joe figure in this wave, but I think this wave is primarilly about the COBRAs, any way. I do think this Grunt figure is good enough to warrant a purchase of the two-pack, though...he is very cool. 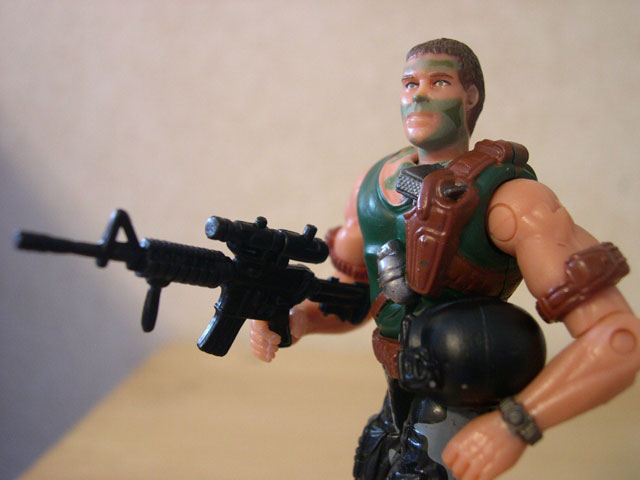 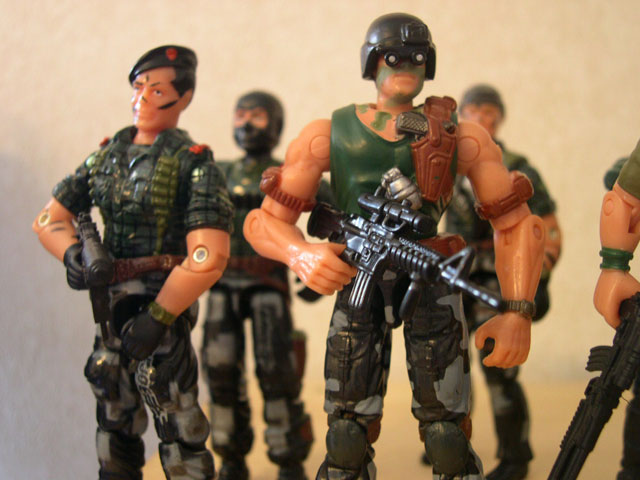 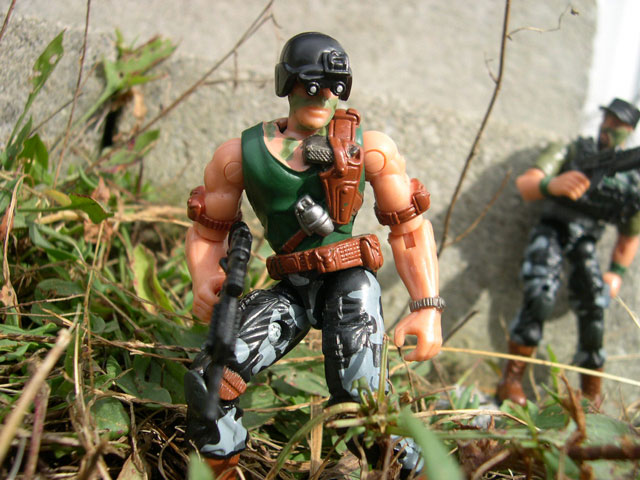 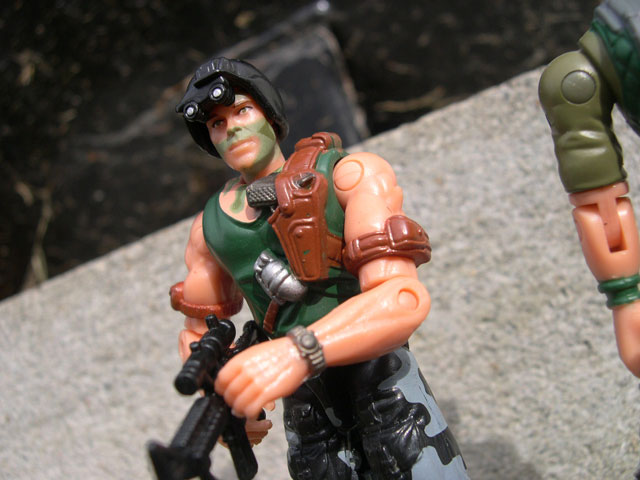