One thing Hasbro has had somewhat consistent problems with since the relaunch of the line has been vehicle driver figures. Back in the old days, characters we got with vehicles were interesting ones on par with "normal" figures, yet had that added specialty of operating that particular vehicle. Characters like Ace, Clutch, Steeler, Wild Bill, even Wildcard...they were neat individual characters designed solely to operate a vehicle, and yet succeeded as their own person as well. 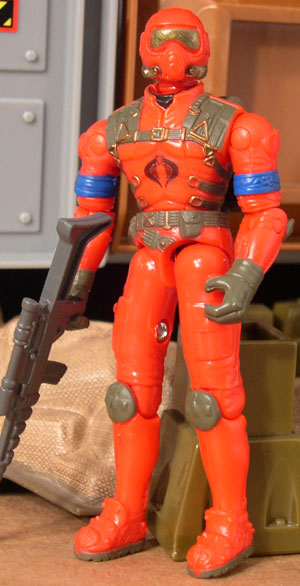 The relaunch, though, seems to treat them a little differently. The figures almost just seem to be a "bonus" thrown in to make the vehicle more appealing and don't necessarily belong to any one particular specialty. People like Bazooka, Backblast, Heavy Duty, etc... who are just normal characters who happen to get included with a particular vehicle for whatever reason.
Recently Hasbro has been getting better, and one of their real successes was the new COBRA plane, the Night Adder, actually released with an exceptionally cool version of classic COBRA pilot Wild Weasel. The original Wild Weasel was one who always baffled me...he seemed to be considered one of COBRA's elite in the early days of the comics and had some good screen time, but I thought the figure was pretty aweful personally. His frumpy, wrinkled mold and strangely shaped, humongous helmet just erased every bit of intimidation from the evil pilot, and in my world his character never really materialized. However, once I got my hands on the Night Adder, Wild Weasel suddenly came to life.

I love the new sculpts as much as the next guy, but Wild Weasel is one of the few molds I can really say that I like better now than I do the classic version of the same character. I really loved the new look at his color scheme, too, getting him more into black leather, only using red as a trim here and there as an accent to his dark look. But I know a lot of traditionalists prefer seeing figures that more remind them of glory days gone by, and wished for an updated Wild Weasel in red. Well, they've got him now.

Like the version that came with the Night Adder, Wild Weasel is a pretty darn cool figure. While he suffers from the all-too-familiar proportion problems that a lot of figures have been hit with over the past few years, it doesn't seem quite as obvious with him and his pluses outweigh these minuses to a large degree. His helmet is small and sleek, yet still seems able to maintain the style of the classic version. The goggles look great and the built-in airmask is sculpted quite nicely indeed.

His uniform resembles more of a motorcycle rider than an airline pilot, but works in either avenue with nice belts running over his chest and intricate detailing worked into every nook and crannie of the figure. It's tough to say a whole lot that hasn't already been said in my Night Adder review, but suffice it to say the figure is just as nicely sculpted now as he was then. His belts and buckles and straps and rubber padding is equally dynamic here, I must say. He's still got the nicely molded COBRA logos pretty much everywhere on his body, and they still look pretty neat when molded in red.

The Night Adder Wild Weasel's mold worked almost due to the color scheme he was in. He seemed to be decked out in a leather biker's suit, somehow configured for a pilot's use, and that works exceptionally well in black, but not so well in red. Especially the bright, dramatic red that this Wild Weasel finds himself painted in. Somehow all I can picture in my mind is the red leather jacket that Michael Jackson used to wear back in the day, and let's face it, any G.I. Joe figure that makes you think of Michael Jackson is a dangerous, dangerous thing.

I see where Hasbro was going with this...making a modern Wild Weasel in the familiar hue of the original...a throwback to how he appeared back then. But what works for that mold does not work for this one, and you end up with a new sculpt figure that's inferior to the same figure released only months ago. The one upside is the brown straps and gold on the goggles...both colors work very well with the red and look nice. But the overall impact of this version of Wild Weasel just doesn't hit me like the other re-releases we've gotten in this wave do.

A Baroness sniper rifle and Sgt. Airborne parachute pack. Blech. Hasbro used their budget on Gung Ho's accessories in this pack and ole Weasel got shafted.

If there is one pack among Wave 4 I advise complete avoidment of, it's definitely this one. Even with Gung Ho's decent accessory load, he is an Action Attack figure, and this version of Wild Weasel is subpar to the one we got with the Night Adder. I can think of no real reason to invest much money in this pack and would say save the cash if you can. 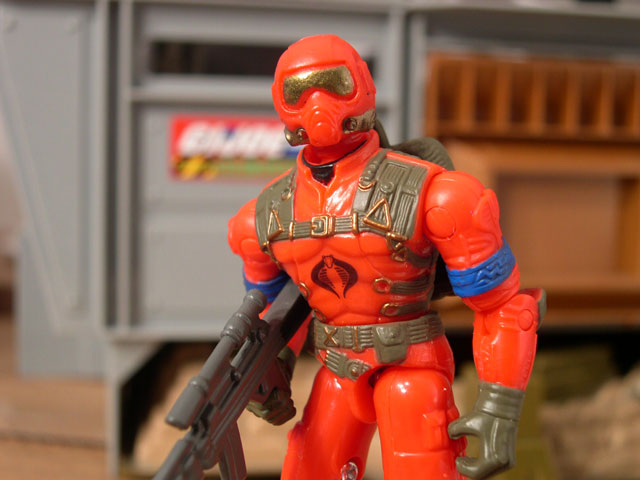