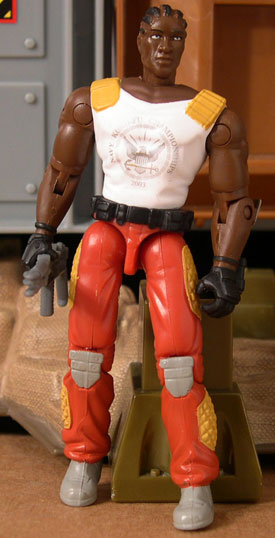 Okay, admit it...when you first heard about this character you couldn't help but chuckle at least a little bit. I can see the Joe team needing a veterinarian about as much as COBRA might need an interior decorator. But once you look at it in context, it makes some sense, especially considering the current theme running throughout the ongoing Joeverse. COBRA is using the DNA of animals to create hybrid super soldiers...it only makes sense that you employ someone with a working knowledge of science and animals to assist in combating this threat. Combine that with the fact that Link is a former Navy SEAL and a Kung Fu champ, and it doesn't seem so far fetched.

As a member of G.I. Joe's ever-growing support staff, Link can almost fit right in, although I have to admit this current incarnation of him looks pretty silly. Cut off sweat shirt and sweat pants just doesn't seem to work in a special forces military environment, but G.I. Joe's been drifting from that for a while now and in it's current state, Link doesn't seem quite so odd. I still would have preferred to see him come with a labcoat, though...that would have made a nice difference and made him look more professional.

I touched on this slightly above, but more as a concept than actual execution. Execution-wise, Link's mold is pretty decent, really. His head sculpt has some great character and looks like a new recruit might look. I'm hoping all military buffs have long since given up the notion of close-cropped hair and clean shaven soldiers as part of the Joe team, and as such, Link works. His hair style is pretty modern and pretty effective, and it's nice to see a new African American member of the team.

The fact that he's wearing what he's wearing is a source of minor discontent to me, but the sculpting is done pretty well. The smooth, softly wrinkled mold looks like the sweat suit that it's supposed to represent and gets the point across pretty effectively. I like the small additions of quilted padding on his legs and back, which adds some much needed detail to what would have been a very plain mold. The shoulder pads on his cut off shirt are interesting additions as well, and break up some monotony in the torso mold, too, something which is always appreciated.

Some things don't especially fit with this mold, however. His arms end up looking pretty bizarre with elbow pads that just seem to erupt from his bare skin and those strange cylinders on the edge of his gloves. I like the look of his gloves over all...thick and nicely padded, but all in all, his self-growing elbow pads just make the arms look a little strange. Had a little strap been sculpted or even just painted somewhere it would look fine, but as it is, it just doesn't quite look right.

This is an item that probably could have been improved. I can see a Joe running around with sweatpants, I guess...but pink sweatpants? Hmm...combine this with the yellow pads and the figure looks a little bright for me. At least he's a member of the support staff and not normally in the field of combat, but still, I'm not wild about those colors. His white shirt and the tampo of his Kung Fu successes on his chest are all done well, and everything else flows smoothly...just not wild about those pants.

Accessories? What accessories? :/ I get the impression that the Spy Drone used up all the accessory money for this two-pack, so we get pretty much nothing with Link. A repaint of the original Eels dart gun and the same wrist communicator that everyone gets is pretty much all she wrote. Link doesn't need much, I suppose, but perhaps one of the laptops that came with Dr. Mindbender, or like I said, some sort of removable labcoat would have been much appreciated.

Not a bad addition to the Joeteam, and I mean that seriously. His mold is silly, his colors are bright, and his specialty is downright hilarious, but I like him, for some strange reason. I plan on acquiring a labcoat for him somewhere and working him into my support staff, more as a researcher and less as a vet, but the fact that I can work him into the Joe ranks is a plus for him. He's definitely not the shining star of this wave, but he's one of the few new Joe characters and I think he works pretty well. Considering that he comes packaged with a possible army builder will help his position, I think...and makes this pack fall a little higher on the "buy" list. 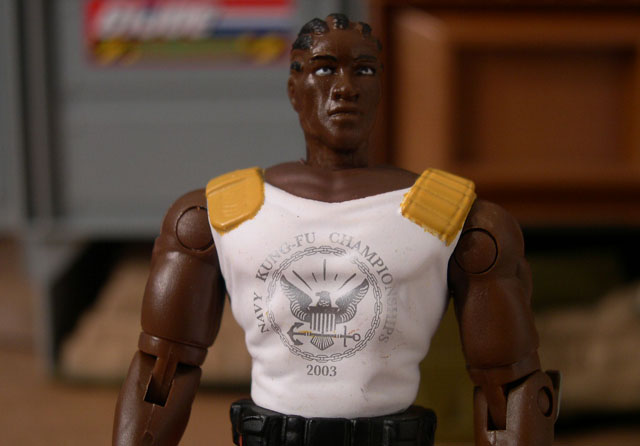 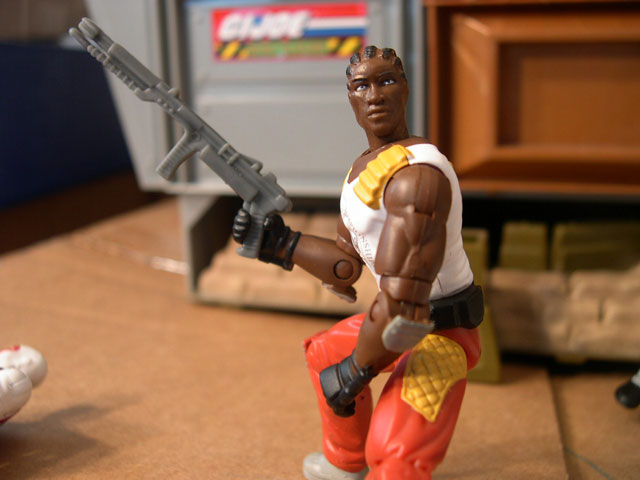