I hate to say it, but the character of Kamakura is really, really growing on me. At first I didn't like him at all, relegating him to Snake Eyes' little gopher apprentice who was just tossed in the book for the sake of creating a new character...no real rhyme or reason. However recently, with the conclusion of Master and Apprentice, the Valor vs. Venom DVD, and now this figure, my opinions of Kamakura are quickly coming around. I credit most of my newfound respect of the character to Brandon Jerwa's excellent craftsmanship in M&A, which was one of the most enjoyable G.I. Joe tales I've read in some time...however, Kamakura's cocky attitude and slow motion motorcycle skills in VvV: The Movie has definitely made him shine in my eyes, too.

I once credited the action attack Kamakura as quite possibly the worst G.I. Joe figure ever made...what a difference 8 months makes, huh? This figure isn't fantastic...it isn't mind blowing or out of this world. But it is a solid figure, and when you consider what it once was, it has some decent traits that make it worth picking up and paying attention to. I also like the fact that it's more of a Hasbro original design, instead of just a figure copied from the Devil's Due books.

Upon first glance you can't help but notice that Kamakura looks a little skimpy...but for him, that skimpiness works, I think. He's a young kid and a new recruit who's pretty green and shouldn't have that broad-shouldered musclebound look yet. The mold is simple and straight forward, with a pretty normal green martial arts uniform, but with some nice added touches on this version compared to the original Wave 7 version. The wide black shoulder pad/strap breaks up the torso mold well and adds a nice bit of detailing to the look of the figure. I also really like the sculpted face mask and think it looks very cool on Kamakura, and a little different than the typical ninja mask that you get.

Another successful aspect of this mold is the layered metal samauri-type armor on his arms and legs. A step in a different direction from the armor we got on the previous version, it has a very cool design asthetic and looks nice against the dark green backdrop of the figure. One severe downside to the figure, however, which is pretty unfortunate, is his rubberized skirting at the bottom of his torso. Hasbro has been moderately successful employing this feature throughout recent years, but for whatever reason, on Kamakura it is so tight that it seriously limits his articulation. He is almost impossible to stand in a fighting stance because of this thing. It's not a problem his previous version had, and it's not a problem that Storm Shadow has, but unfortunately this figure is hit pretty hard, and it really knocks it down a few notches in the playability column.

All in all, the mold is nice and simple...nothing drastic or dramatic, but effective and pretty fun for what it is.

This is another nice spot on this figure. They go with the flow from how Kamakura looks in the comics with a base green uniform color, and they step it up a little bit, making the green even darker and deeper. This combined with the black color of the shoulder pads and boots as well as the charcoal color of the mask makes the figure look great and subdued. To make it so the figure isn't TOO subdued, Hasbro tosses on some nice silver armor to brighten things up a little bit and add some awesome contrast to what could have been a pretty dark figure. All paint apps work well with each other and look great.

Kamakura comes with the requisite Uzi, sword and sheath, but the sword is an excellent one. It looks to possibly be a new sculpt one, and I love the angled handle and sword design. It's meshes really nicely with the featured sword in the Valor Vs. Venom movie and is just over all a great updated weapon for Joe martial artists. Not a whole lot of accessories here, but all the ones that count, and they are well-chosen, too.

Kamakura is coming out of his shell in all forms of Joe media, and why should the toyline be any different. I really like this new version of the figure now that he is constructed properly, and I am eagerly trying to find a way to work him into my ongoing Joeverse. His background in Master & Apprentice is great, and obviously quite a bit different from how he is intended in Valor Vs. Venom (I think, any way), but I'm confident the two personallities can be merged well enough to work. This version separates him a little bit from just being a clone of the DD character and he starts to get more involved in the Joe mythos as a whole. Now that he has an o-ring, and now that he's packaged with Storm Shadow (also, finally getting an o-ring!!) this two-pack is a must buy, unless you hate ninjas. 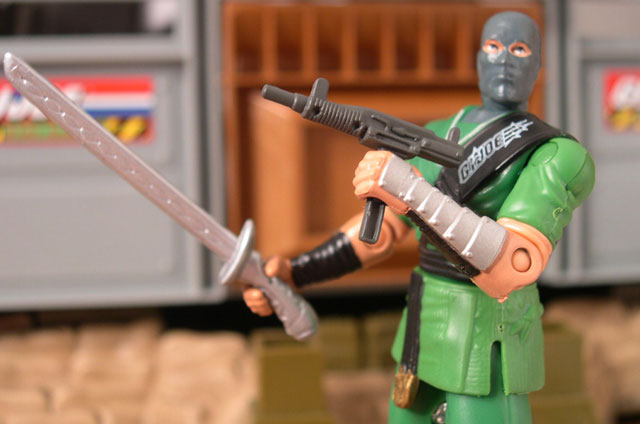