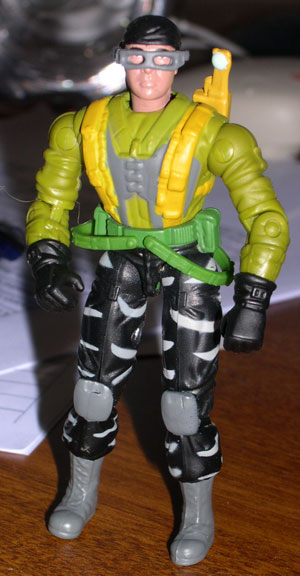 People have been waiting a long time for a "real" Tunnel Rat. We got a pretty decent one in Wave 5 last year, but because of the height of the figure many people were put off.

It's kind of odd how conceptions of a character can change all depending on a single use of that character. When Tunnel Rat was released in 1987, as far as I can remember, he was pretty much the same height as any other G.I. Joe figure that year. I don't remember him being particularly small or short.

However, a single appearence in G.I. Joe: The Movie, and now Tunnel Rat is a scrawny little scrapper, shorter than the bulk of his teammates. As such, the Wave 5 version, towering over a lot of other figures of the same wave, looked quite silly.

Well, that was one thing that Hasbro promised to work on last year at the convention. The "Standard Buck" was coming! Heights would be consistent with the characters, and it looks like they made good. So, Tunnel Rat is short as he should be. But is he a good figure?

Upon first glance it occurs to me I have no idea what the heck is going on with Tunnel Rat's mold. His head sculpt looks darn near the same as his Wave 5 one, but his chest just has too much happening. He's got some funky straps going down over some funky gray chest armor, which in turn is going over a funky green jacket, which in turn is going over a solid green shirt underneath...yikes!

From there on, though, things calm down a little bit, with pretty simple solid sleeves, nicely padded gloves and pretty standard pants w/ kneepads. Nothing really out of the ordinary going on there. His belt is nicely sculpted as well, with some pouches and detailing, as well as the twin straps that kind of hang down (but don't appear to do anything). Not a bad mold, really.

This is where the figure suffers, and suffers greatly. I'm sorry, but this is one fugly looking figure. His base color is a bizarre lime green shade that definitely doesn't look like "tunnel" material. Combine that with the yellow straps and backpack and Tunnel Rat looks big and bright. His pants aren't too bad, based in black with some off-white camo stripes, but combined with the uber-brightness of his jacket, the two color schemes just don't seem to mesh. We get treated with some great in the kneepads, boots, and chest armor and it's a nice hue, but is completely overshadowed by the blinding green. Just not a pretty looking color pallet on this one.

Well, Tunnel Rat actually comes with a handful of new stuff...some removable goggles, which are kind of neat, a new sculpt backpack...and those two straps that go from his belt to...well...another spot on his belt. These are all neat little additions, but aren't that cool, and I'd still rather see a new weapon of some kind. Instead this Tunnel Rat gets the same sniper rifle that the Wave 5 Tunnel Rat came with, even though he's not a sniper. :/

I feel like I've been shooting everything down lately, and that's really not my intention. I do enjoy these new sculpt figures, some much more than others, but I find my tastes getting a little bit pickier. I see some excellent stuff coming out using classic Real American Hero sculpts, and a part of me wishes the same time and care was being put into some of the new stuff that seems to be slapped out real quick.

Tunnel Rat isn't a bad figure...he, like several of the other Joes of this wave, just isn't anything really special. 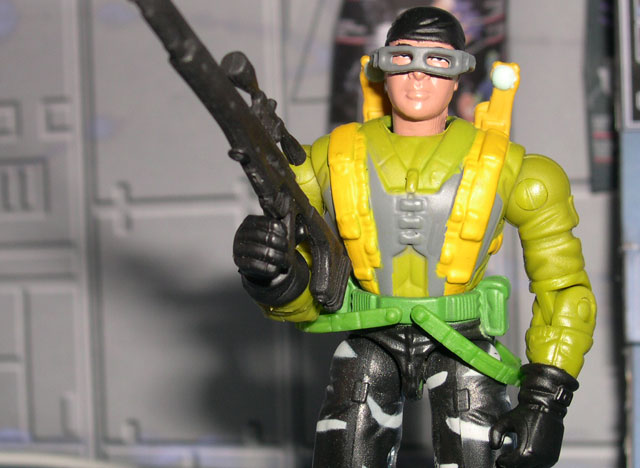 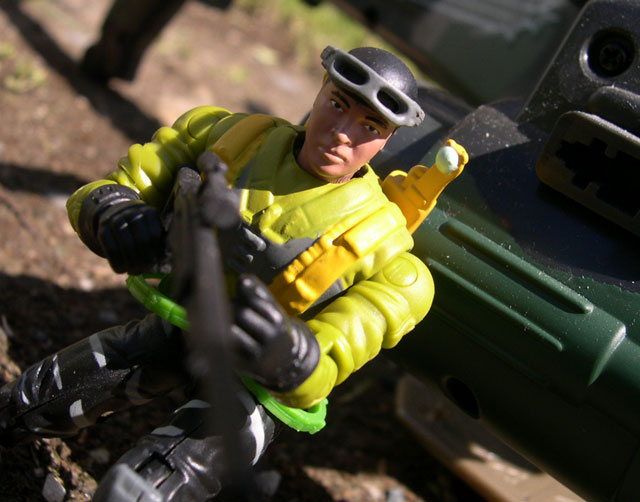 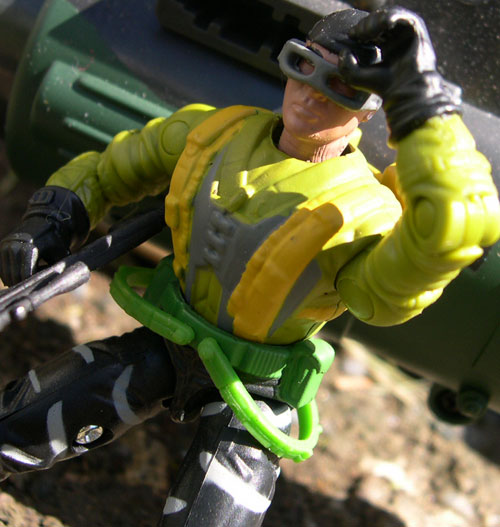