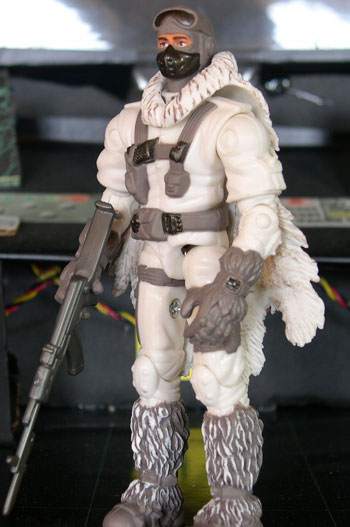 Well, what is there to say, really?

No, your eyes do not deceive you, this figure is, indeed nearly identical to the one that came with the Polar Blast. His paint scheme is dead on the same, with no differences that I can find whatsoever.

The Wave 3 figures were just plain bizarre. An anime-styled anomoly amidst a series of realistically sculpted and designed figures. You wouldn't think you could integrate them, especially now that Valor Vs. Venom has streamlined the figure molding and proportions.

Yet, here's the familiar Snow Serpent figure from Wave 3...but his oversized mitts and feet are easily explained by...dog DNA! It's actually kind of clever and it works as a way to re-use the mold and still make it fit into the newest theme.

There really isn't much to say that I didn't say the previous times this same figure was released. His uniform has a nice realistic base to it, but his proportions are completely insane. He has a tiny head and waist, and HUGE hands and feet. Of course now, this is easily explained by the splicing of DNA to improve his physical attributes. This works for me, and I'm now planning on integrating all of my past Snow Serpents into the Snow Wolf class...it almost makes more sense.

The fur is nicely detailed and all parts are sculpted well...over all not a bad mold, but nothing amazing about it.

Pretty uninspired. Taken directly from the Snow Serpent that comes with the Polar Blast snowmobile, Snow Wolf is just basically a white and gray snow trooper. The paint apps on the fur to make them appear frosted is done excellently, just as it was with all previous versions. Everything works all right...it's just been done before. Exactly the same.

All of his accessories are rehashed, but he's got an okay selection at least. His main rifle is a Neo-Viper AK-47 with bayonet. He also comes with the silenced submachine gun that the '89 Snake Eyes first used, so he's got some okay weapons, even though they've been used before (just like the figure!).

Again, nothing to say that I haven't already said. I do like how they explain his proportions...I'm honestly not sure I'll ever use the "Snow Wolf" squad in my Joeverse...and I would have at least liked to have seen a different paint scheme.

But I guess if they were going to make a complete re-tread, at least they made one out of a mold I don't like either, so it'll save me even more money at the cash register. 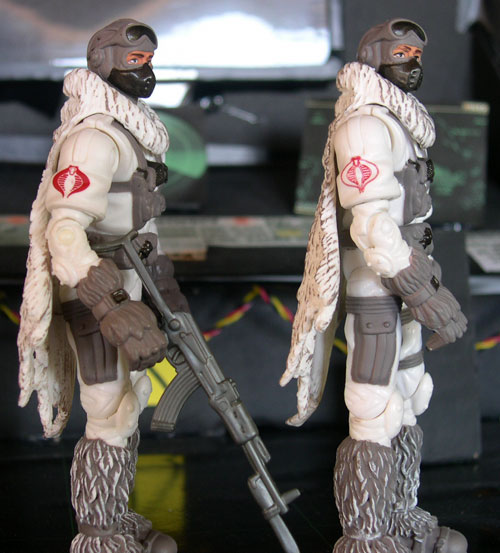 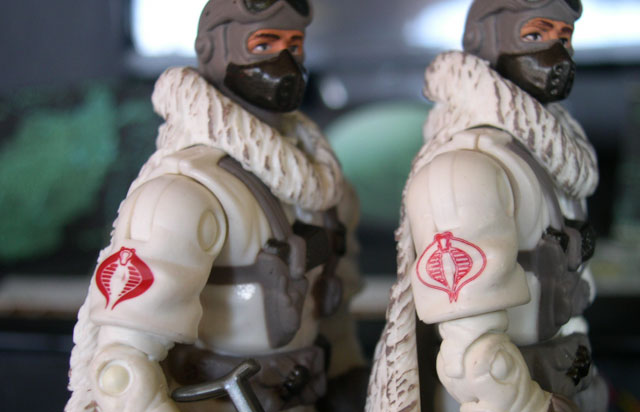 The one and only difference between Snow Wolf and the Polar Blast Snow Serpent-- Wolf has the solid COBRA symbol, where the other one just has the outlines