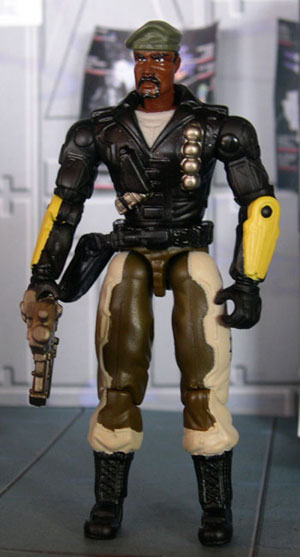 I think you can often tell the cartoon fan from the comic fan by how much the person likes Stalker.

Stalker is one of those characters who, for whatever reason, appeared rarely in one form of medium, and yet was a vital componant and core character in the other. An Army Ranger since Vietnam, and Snake Eyes' best friend, Stalker is an ex-gang member from Detroit and the baddest of the bad.

His Joe Vs. COBRA figure was one of the greatest new sculpt figures up until that point, and still stands as a terrific figure compared to even more recent offerings...and yes, even compared to the Wave 3 version. Given a choice, I'd probably go with the JvC version over this one, although each one has their merits.

This version of Stalker, like the Dusty figure, seems to take a step away from standard military fare and liven things up a little bit. Compared to the standard camo fatigues in 1982, this look is considerably different, and still works on some levels, although not all.

As usual, we start at the head sculpt, which is a nice likeness of Lonzo Wilkenson. His face is slim and stern, and as expected, his moustache is replaced by the all to familiar goatee. The beret is nicely molded, and by now has become synonomous with Stalker.

But the military protocol pretty much ends there. Like the JvC version, this Stalker wears a high-collared open jacket, and this one has some nice lining and detailing running through it. His padded gloves are complimented by almost standard arm-guards, which all look like they belong.

Where the mold starts to fall short is in the chest details. The gun holster and grenades kind of just look slapped on and don't really seem functional at all...they're just background. I like the built-in details to look like they could actually be used...these don't, and it does affect how the figure looks.

The pouch on his hip looks pretty neat and works well, too, but for those of you who don't like it, it's easily removable.

A big sticking point with this figure also, is the pants. What exactly are those pants? I'm not sure how to explain it, but they are molded as some sort of layered pants with padding on the outside and cloth on the inside. They actually look pretty neat, but are obviously a page pulled from the comic books and not really standard military issue. Again, that's fine with me, but not with a lot of folks out there.

Stalker is one big overflowing mixed bag of paint selections and applications. First of all, the black jacket works well and looks nice over the off-white shirt and green beret. But yellow seems to be an odd color choice for the arm guards and the pads on the back of the jacket. I'm not quite certain where that color choice comes from...perhaps just to brighten things up a little, but it's not really working for me.

The pants are an interesting combination of off white and green, but don't really mix with the black jacket that well and seem almost out of place. Still, the two colors are appealing in their own right, and do add something to the overall look of the figure. The color design on the pants is interesting as well, and definitely a different look.

Stalker's accessories are probably the most boring...really his only "new" accessory I can think of is his pouch on his hip. Everything else is rehashed and re-used. The Sand-Vipers heavy machine gun is his regular issue armament, but there is nothing else that stands out. He is hurt in this regard.

I'm not really sure where I stand on this figure. He's not a bad one, and has some nice different parts about him, but nothing really comes together. He's definitely Stalker, there's no doubt about it, and his colors are nicely reminiscent of his Talking Battle Commander version, but beyond that he's nothing incredibly special or unique. 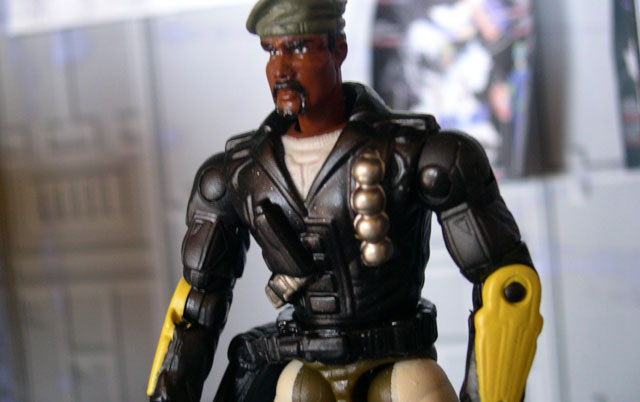 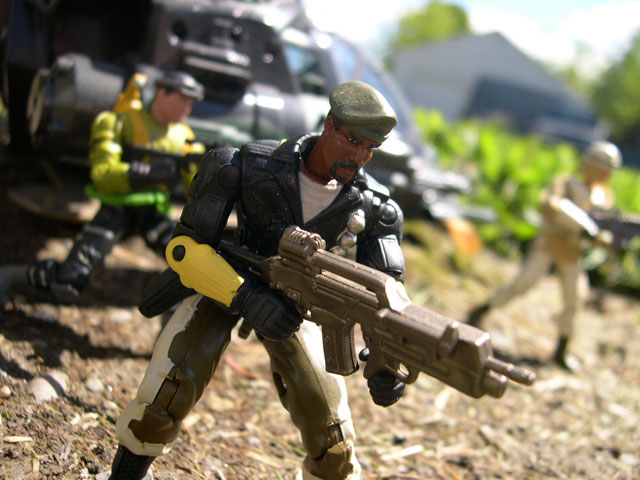 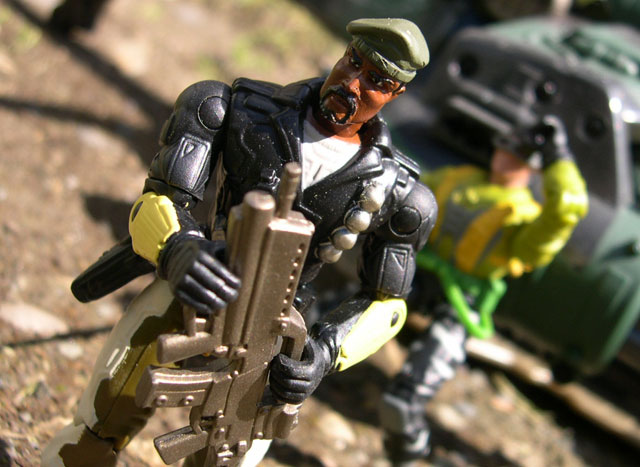