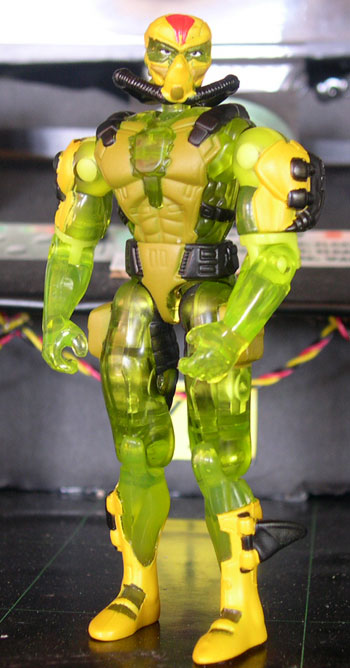 From reading the boards ever since this figure was first shown, it has become obvious that there are two distinct camps regarding this figure. People either love him or hate him.

Upon first glance, I was deeply entranced by the look of the figure and the concept of the character, and was definitely in the "love" camp. It's not often that we get a translucent figure in the G.I. Joe line, and as such, the Electric Eel really stands out. But is he good figure on his own merits, or only because of his "funkiness"? It's a little mixture of both, and I actually find now that I have the figure in my hand, that my love for it has dimmed slightly. It's still a very neat figure, but there remain some faults with it as well.

First of all, my immediate disappointment came when I opened up the package and realized that our boy Eel here suffers from "Alley-Viper II proportions", or at least a variation on that theme.

I'm not even sure where it comes from...why the majority of figures in a wave will have proportions much improved on compared to earlier waves, and then we get hit with another "short torso-long leg" mold like this one. Fortunately, it's not nearly as pronounced on this figure as it is on Alley-Viper, but still...it would have been nice to get a figure of this caliber in the proper proportions.

Well, talking about this mold is going to take a while, because there is a LOT to talk about. This is one busy mold here with a lot of stuff going on.

First we'll touch on the head sculpt. It quite obviously draws some inspiration from the Moray, which makes sense since these figures are venomized versions of the Moray underwater troopers. It's kind of small, but nicely rounded and sleek, with a well-detailed faceplate over a layered armoed scalp. The air hoses are permenantly attached to the face, but hang loose behind the head without restricting movement. Theres also a nicely designed COBRA logo on his forehead which adds some coolness to it as well.

The torso is also nicely designed, although with the see-through plastic the mold details can be tough to pick out. He's got some cool layered chest armor, which connects to a small pack on his back through some black straps. Underneath this armor, he has some nicely sculpted muscles that look a little too well-defined. His arms have a similar look to them with a mixture of ogranic and mechanical componants mixing well and looking pretty cool. The nicest touch, I'd have to say, is the armor on his legs, which also has some neat fins, I'd imagine to assist in swimming through the water. All of this stuff meshes together pretty nicely and makes for a busy, yet nicely effective mold, in spite of some minor issues with proportion.

Well, I'll say this right off the bat--if you're one of those guys that only likes your Joes in green, brown and black, and only likes your COBRAs in blue, black and red, well this is not a figure for you. This boy is BRIGHT.

The base color is a transparent light green, which is actually a neat shade, I think. His chest plate and pouches are a slightly duller shade of green, a very nice color, and the rest of his armor is green/yellow. There is nothing dark and stealthy about this guy at all. As an "Electric Eel" (yes, according to his filecard, he has electrical abilities) his colors suit him well, although I will say if Hasbro ever decides to release him as a more standard Eel in grays, blacks, and reds, they will get no complaints from me. I think the figure will look excellent in that regard as well.

His standard weapons are just plain lame...he comes with Moray's goofy laser rifle (that I think originally came with Sonic Fighter Major Bludd...grossness to the Nth degree) and with Undertow's strange trident-thing. Nothing redeeming about those weapons at all.

Besides those he comes with his light-supplying backpack (which works only moderately, even in a dark room) and some freaky lookin' rubber hands, that I would imagine are designed to simulate a venomized monster-Eel. That's one thing you gotta give Hasbro...even when they do venomize something, they at least make the monster parts removable.

This figure is quite neat and very appealing just by the nature of being different. I'm not sure how useful he is in this capacity, or how much I'll feel the need to integrate him into my Joeverse looking like this. I dig the look, but it's just so out there that I'm not sure how it would come off in dio form.

Still, I love the chances that Hasbro took with the figure, and I'm hoping it's popular with the kiddies. Popular enough, anyway, to possibly get a non-electric repaint. 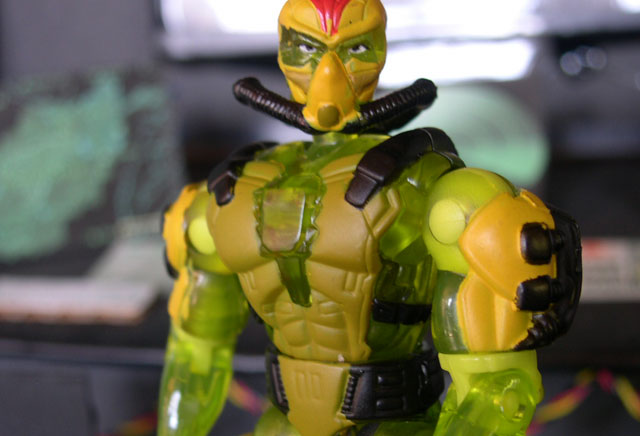 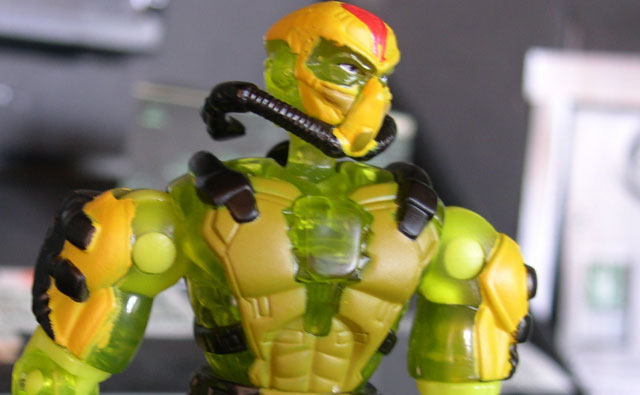 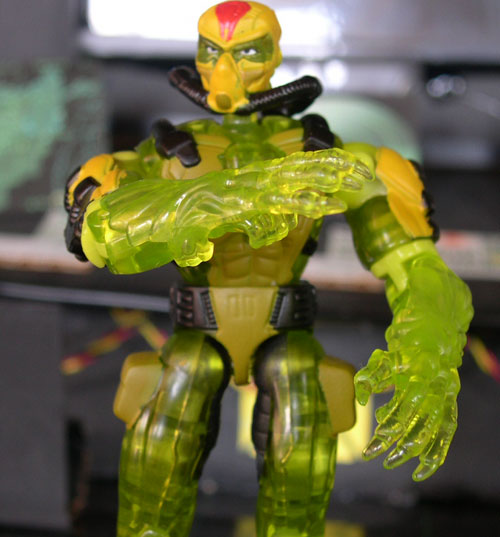 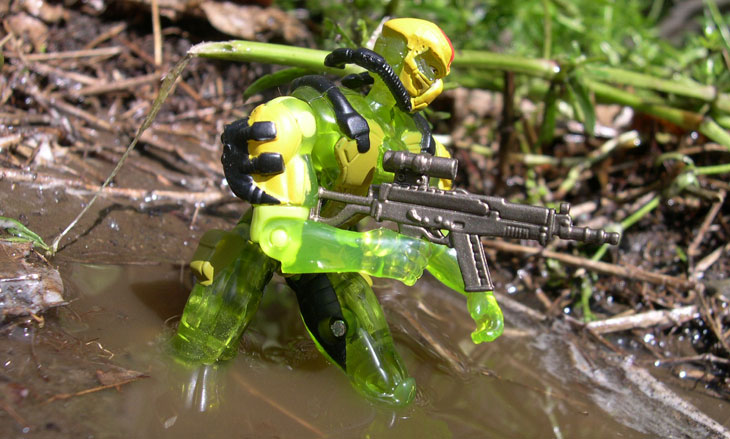 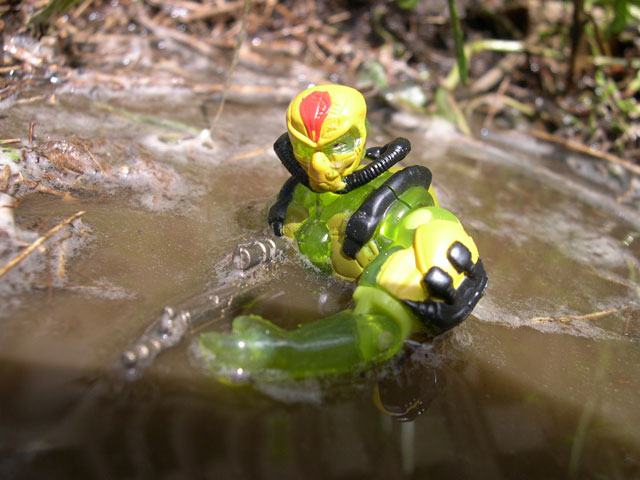 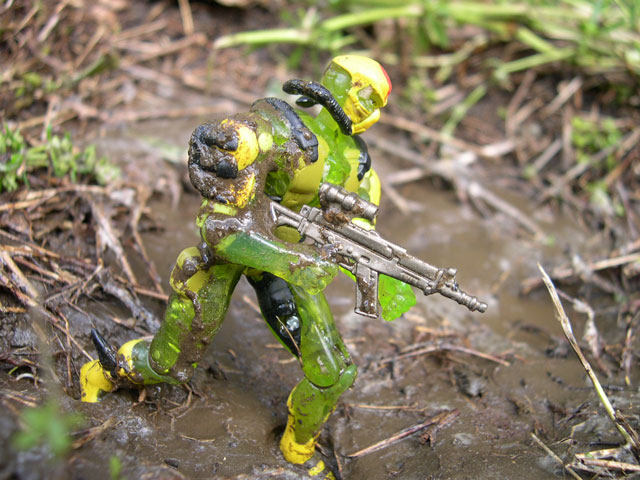