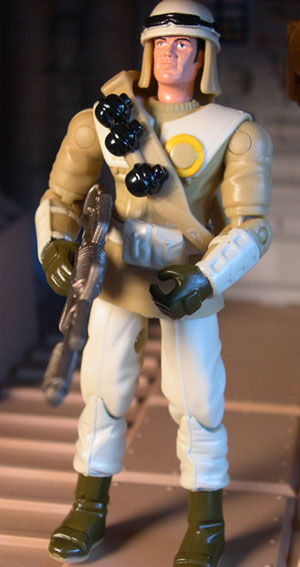 As I've been saying quite a bit lately, Hasbro is working overtime it seems to make G.I. Joe more than a military organization...they want superheros. And it would seem with Dusty, they've found a way to integrate the two in a pretty decent way.

I've never really been a fan of Dusty, even though he's gotten some decent screen time in both medium. I'm sure it has to do with the fact that I'm not big on environment-specific figures, and with a lack of desert area here in Vermont, I never really found a reason to use him. Will this figure change my mind at all? Probably not, but it's not a bad figure.

Based strongly after how Dusty appeared in the Spy Troops cartoon, this figure has pretty decent proportions and some nice flair to what could be a pretty dull figure.

Dusty's base uniform is pretty basic, with a pretty ordinary desert-themed jacket and pants...however Hasbro is able to spice up the mold considerably by adding the pretty cool chestplate and forearm guards. Even the small pads on the gloves do well to make them stand out.

The aforementioned chestplate has some cool adornments as well, making it even more effective in spicing up the torso mold a little bit. The lower half of the figure is just your basic pants and boots combination, but played off of the top half, its simplicity works wonders and brings the whole figure together nicely.

The pouches on his belt look great, and the tail of the jacket still allows for pretty decent freedom of movement. Hasbro also did well on the head sculpt and face, making it look very similar to the original JvC Dusty, but adding the removable helmet.

While the color choices are kind of bland, they work in a desert environment, and there are enough different shades of tan and brown to at least stay somewhat interesting. The bright pants are offset by a slightly darker jacket, and even darker brown boots. The metallic armor on the top half of the figure match the color of the pants and pulls it all together nicely. Yeah, I know in the B.A.T. review I said brown is boring, and it is, but these different variations of the brown work pretty well.

Dusty comes with a couple of pretty neat removable accessories with his helmet and bandolier, but nothing else is really special. It seems like this is Hasbro's MO these days...give the figures a few original, different accessories, but the rest are just re-hashes. Unfortunately the re-hashes are usually the weapons, which is too bad, since those are a big draw for a lot of collectors.

Still, we haven't had a Dusty with a removable helmet since the first one came out in 1985, so it is appreciated and overall the accessory compliment isn't horrible.

This traitorous refridgerator repairman is a constant in the G.I. Joe universe, but not really in mine. I don't like the character especially, and I'm pretty lukewarm about this figure as well. There isn't really anything bad about it, but there's nothing to scream about either, and I'm not sure how much I'll use it. If I do end up with another desert mission some time soon, this version of Dusty will most likely make the cut, but he just isn't eye-catching enough for me to make an exception for. Some figures I will find a way to work into a story, even if they might not belong there..not in this case. 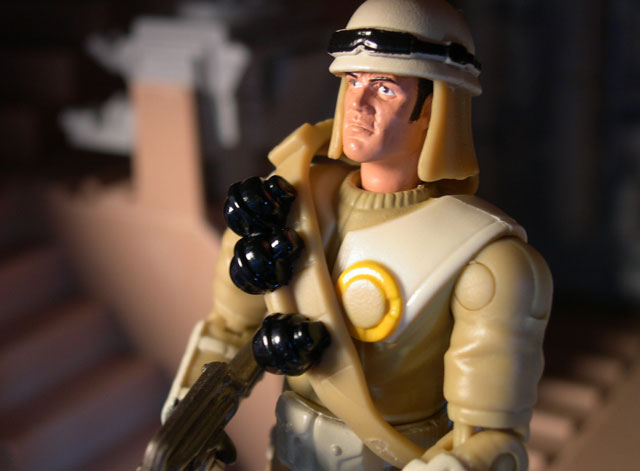 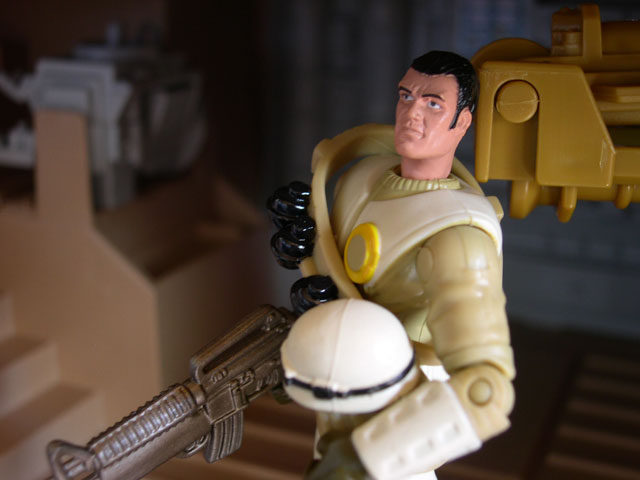 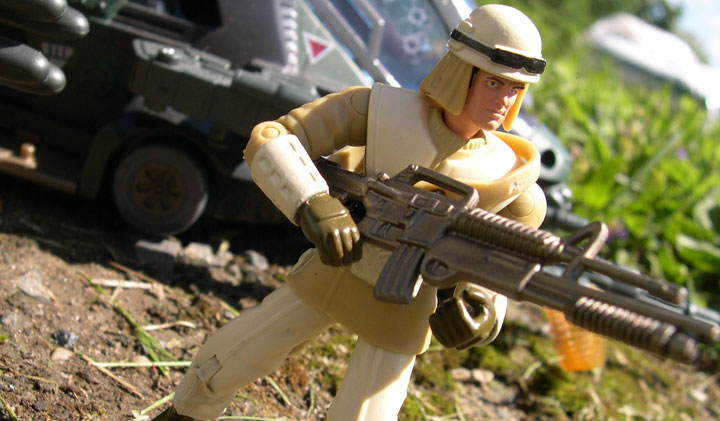