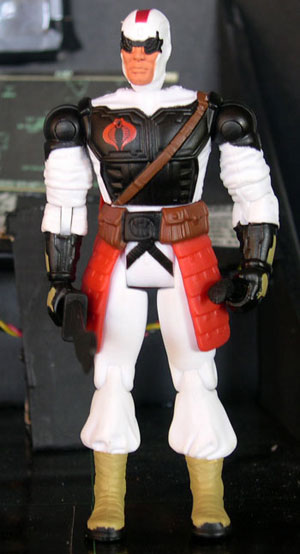 Please, Hasbro stop the madness! Every time I see a G.I. Joe figure released with a "T-Crotch" and no O-ring, a little piece of me dies inside. Hasbro, you're solely responsible for taking years of my life...think about that the next time you're considering how to "spice up" next year's theme.

In all seriousness, though, I think I've actually found a method to the Big "H"'s madness.

They want figures that "do things" that kids will like. Figures that punch and kick and spin around and smack themselves with nunchuks...that's what kids like, after all (errr... okay...). Hasbro also knows that the majority of adult G.I. Joe collectors will go into a violent rage over their figures missing the precious O-rings.

But...supposedly, these adult Joe collectors also hate ninjas. Well, a lot of them do, any way.

Solution? Take all the ninjas that the collectors hate any way, and give them the Action Attack garbage. Think this makes sense, or am I just talking out of my butt? My vote's on the "butt" one.

The overall mold of this figure actually isn't too bad, which makes the Action Attack all the more annoying. Like Jinx, he takes some serious hints from the orient with nicely adorned martial arts chest padding and layered skirt. He's got some nicely designed gloves and effective baggy uniform pants. One look at him, and he does look as a ninja should.

Where the figure really shines, though, is in the head sculpt.

I don't think anyone will argue that in this new line Hasbro has made great strides in the head-sculpt department. The faces and heads are all very nicely crafted and have a lot of character to them, but also do something different than just have a bunch of soldiers and bad guys in masks. Slice's open faced mask looks neat, and I really dig those funky goggles he has on, too. Combine this with his red cloth "ponytail" and the head sculpt has a lot of cool character to it, and looks quite different. It blends with the rest of the figure very well.

But who's listening to what I'm saying here, any way? All that matters is this figure is ACTION ATTACK. That means he gets tossed in the junk drawer.

It seems here that Hasbro took a step in a different direction compared to the Slice we've seen in the past. They definitely took his red uniform and integrated here to some degree, but left most of him white, which doesn't look too bad, really. The white makes it look like he has a standard martial arts uniform on underneath his pads, which works very well and looks fine. What black they use is placed well and works nicely off of the white base, and the touch of red here and there does the same.

Another nice little splash of color is in the tan boots, which look nice and realistic both.

Not much to talk about here. He comes with an obnxiously huge ninja sword which stinks, but he does come with a pair of those cool COBRA-knives, which are always useful. Plus, he has a butt plug you can press which makes him spin around. Wheeee...

I'm sorry...I just can't help but inject some sarcasm in the action attack reviews. Every collector on the planet hates the feature, and I know Hasbro knows this, but are still doing their best to integrate it well, and try not to offend too many people. I only hope that the information Hasbro revealed about T-Crotch Joes being released with O-rings later is true...at that point, I think a lot of forgiveness will be asked for, and hopefully some given.

This figure isn't really that bad...but with an O-ring it would be a whole lot better. 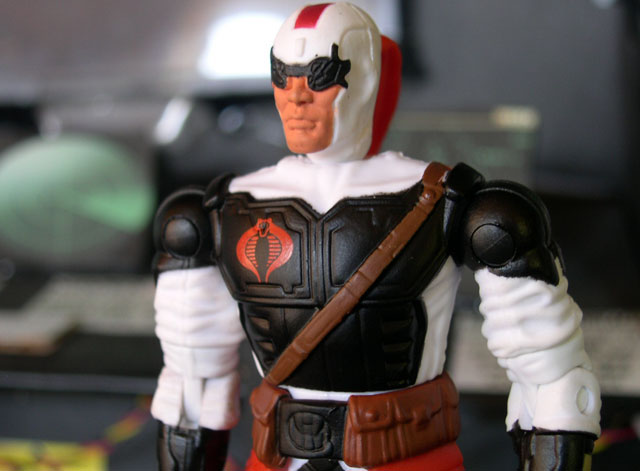 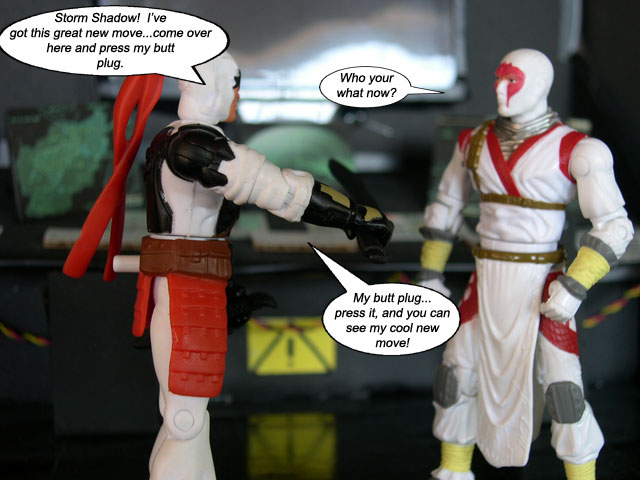 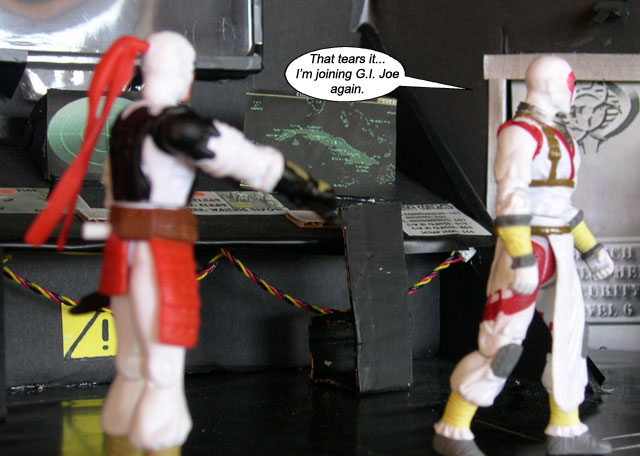 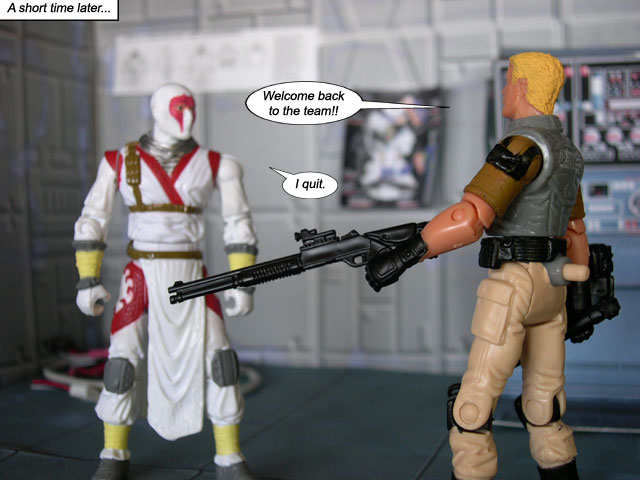