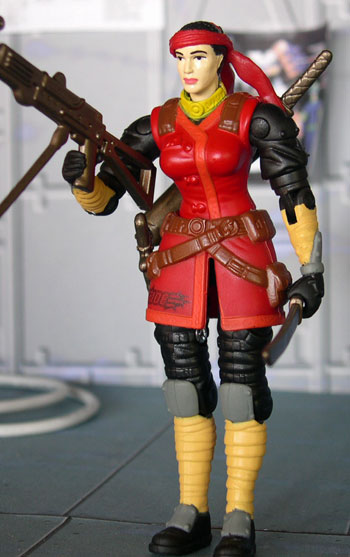 One great thing that the two-pack format has brought us the chance for more female figures throughout this new run of G.I. Joe. It actually looks as if Hasbro is putting in some effort to represent pretty much every classic-sculpt female, and is so far only short on Cover Girl.

The rest of the female figures up to this point have been somewhat of a mixed bag. From disproportionate measurements to scrawny bodies and teeny tiny heads, it almost seems as if Hasbro doesn't quite have a grasp on the female anatomy. What does Agent Jinx bring us?

A lot more consistancy, but still not quite perfect.

Up to this point, the female molds have kind of jumped all over the place, trying to decide if they want to be models or soldiers. Most of the figures have chosen the prior, although things are getting better. I think Jinx brings it another step closer.

I've never been a huge fan of Jinx, really...she was okay in the comics, and even has an interested personality in the Movie, but I just never found a real use for her. In a team full of ninjas and female intelligence officers, she kind of fades into the background. Add that to the fact that her original figure was only useful as a martial artist and you have someone who really doesn't beg to get used.

Thankfully, though, this mold puts a little more action in the character, although it still retains some ninja roots.

The head sculpt is a really nice one, with simple features, yet different enough from the other females to separate her from the pack. Her ponytail is nicely sculpted as well. The body mold itself obviously takes some hints from martial arts uniforms and oriental dress, but keeps it modern and loose enough to be used in a military setting. Her multi-layered (in color and mold) shirt blends really nice together and I love the wrapping around her arms and legs. I'm a sucker for wraps, and these all work well and add a nice bright splash of color on the black background without being too garrish.

Along with her simple uniform, though, they add some cool plates and pads here and there to liven things up. She has some metal shoulder guards, forearm guards and kneepads, which break up the plain cloth uniform nicely. My only real complaint, though, is the rubberized "skirting" that they use. Hasbro has done this pretty well in the past, but in Jinx, it's too restrictive, especially as a martial artist. There is no way she can kick, and she can barely even kneel because it's so tight to her legs and so rigid. I haven't toyed with removing it yet, although I might just see how she looks without it.

The color choices here are pretty straight forward and work fine. Hasbro's design team definitely used the '87 Jinx as a template and based the color scheme of the new one off of her red and black uniform. But Hasbro added a lot more black to it, which looks really nice. To break things up even further, her pads and metal plates are a nice dull gray. Even nicer are the aforementioned bandage wraps, which are colored in a realistic off-white and not only look real, but add some nice different tones as well. Good choices over all.

So far in Valor Vs. Venom, accessory choices are very much a mixed bag. A lot of reused and rehashed weapons really bring down the desirability of some figures. In the case of this figure, though, they actually have a few new sculpt weapons and gear that work pretty well. Both of her swords appear to be new sculpts, or might be based off of the Valor Vs. Venom Scarlett sword. Either way, they are different and work well. She also has a cool miniature knife which clips nicely to a hole on her hip and looks good.

Lastly, we have a neat little accessory in her blindfold, which pays homage to both the comics, and her appearence in G.I. Joe: The Movie. It's nice to see some knowledge of the character's past, and this little removable blindfold works great. It also makes a good headband, too. Jinx's machine gun is a repaint of Big Bear's , which has appeared often over the past few years, and is pretty uninspired. Unfortunately, when it comes to weapon molds in the new figures, that feeling is becoming the norm.

Overall, this is a pretty nice figure. It doesn't blow me away by any means, but it takes some cool hints from G.I. Joe's past and updates the character nicely. Everything about her is done fairly well, but there is nothing really incredible, at least in my opinion. 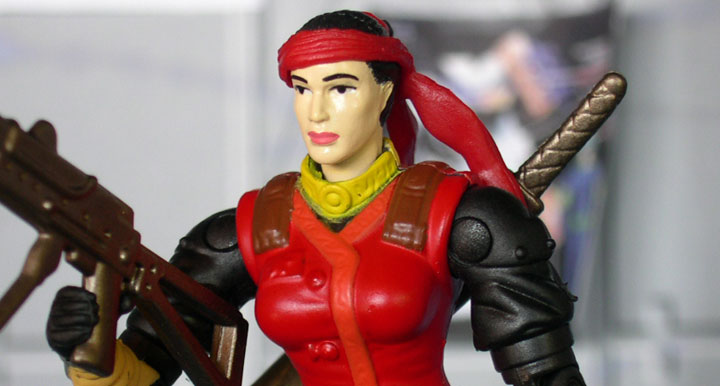 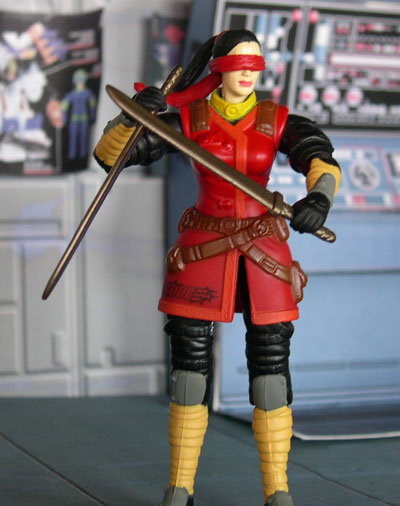 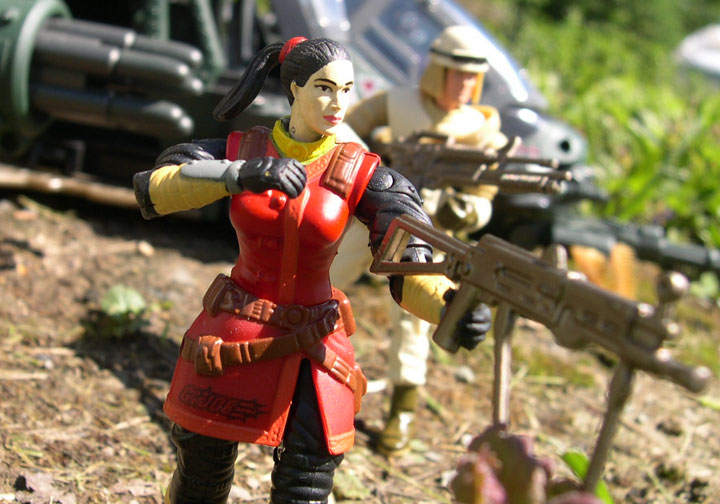