Well, welcome to the first figure review using this new format that Sentinel came up with. Please let me know if you like it or not. The content shouldn't be changing a whole lot, just the organization and the format. 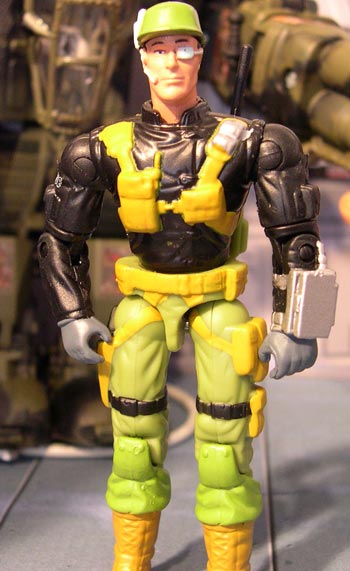 Things weren't looking too pretty for Hard Drive when pictures first surfaced. His colors looked obnoxiously bright, his mold looked funky and his purpose was unsure.

I'm pretty happy to say that upon final release, he's looking quite a bit better and definitely well suited to being the Joes' new computer specialist.

He is still pretty bright and unusual, but not in the same way that Alpine is. Where Alpine's specialty is hurt by his funky colors and unusual mold, for Hard Drive it almost makes sense. Hard Drive is the ultimate support troop- repairman, small arms armorer, even a medic, and he looks the part.

For a techno whiz, Hard Drive definitely looks the part. From the cool hat/communicator/eyepiece combo, to his scores of pouches, pockets and straps on his legs, this figure just looks like he's on the field and ready for anything.

His base uniform looks pretty simple, with plain khaki shirt and pants, but it's the added details that bring the figure to life. Twin straps adorned with pouches and accessories are on his chest, then joined by a belt around the waist and two thigh straps, we get a ton of other pockets and such for all of the crucial details.

His right holster houses his pistol (non-removable) and other , darker belts are prevalant as well. His legs are finished off by kneepads and combat boots, all of which look nice, although I would have liked to have seen the kneepads painted.

But perhaps the coolest thing about this figure is his wrist computer. Thank goodness it's not pink like in the proto shots...instead it's a nice silver color with a great flip-up screen and some nice detailing inside. It's a great little touch that adds a nice flair to the figure without getting in the way. Very nice mold, all around.

The paint apps in this wave in general seem to be a source of some serious discomfort, and in some cases I agree. Not necessarily in this case, though.

The color pallet used for Hard Drive really screams "Battle Corps". He seems quite similar to the Battle Corps releases of the early to mid 90's, but while some people consider that a curse, I think it's great. I'm a Battle Corps fan personally (for the most part) and don't have serious problems with some lighter color trims here and there as long as they don't interfere with the purpose of the figure and as long as they compliment each other well. Hard Drive's do both.

His black jacket matches up to the yellowish straps nicely, and even his light green pants work for me. They're different colors, but not obnoxiously different and honestly work pretty well together. The majority of the figure is in a somewhat duller color tone, and I don't mind how the yellow-type straps look. It all comes together well with an appealing figure that looks nice, which is really all that matters to me.

Hard Drive comes with a new backpack w/ antenna, that looks somewhat substandard when compared to the backpacks of old. It's a little slimmer and flimsier looking, but still works for Hard Drive and is a nice technological pack which suits him. The only other accessory really worth mentioning is the aforementioned wrist computer which is a great little item that seems to serve a cool purpose. Simple, but effective, Hard Drive doesn't seem like the type of figure who would need a whole lot of guns and battle equipment any way.

At first glance, Hard Drive seemed like the lowpoint of this wave. A brightly colored construction worker with some goofy pants and not much purpose to serve. But when I got him in my hand, my opinion changed considerably. He looks much cooler in person and can definitely integrate well into my Joeverse, joining Hi Tech and Hacker on the technology team for the new century. He is worlds better than the Wave 1 Hi-Tech, and will probably be used more often than he will. 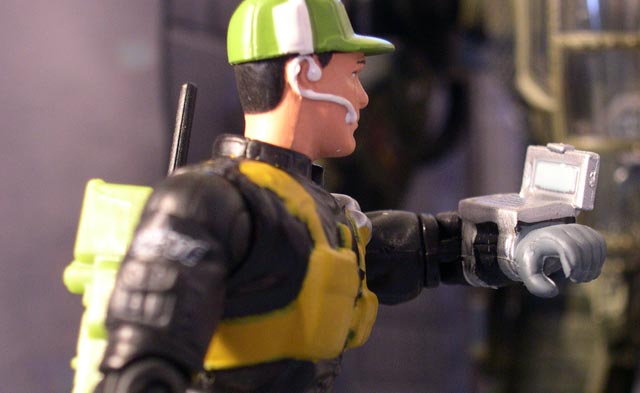 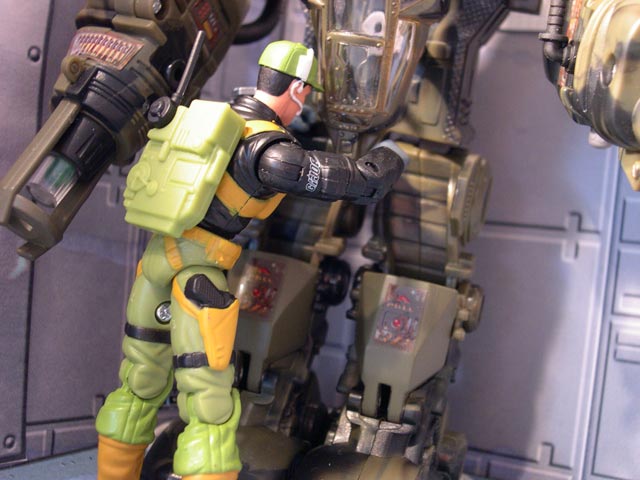 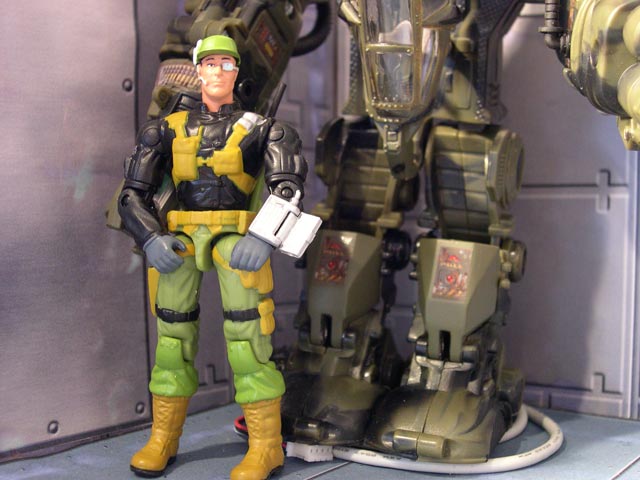