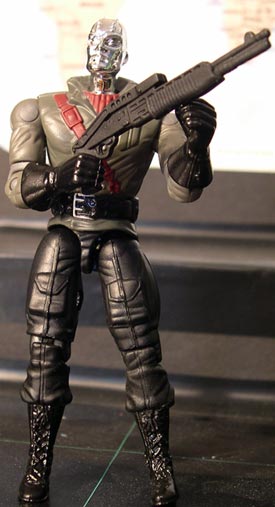 Well, as much as I loved the Wave 7 Destro, there were a lot of fans out there who bemoaned the casual look and asked for a Destro more "battle ready".

Well, we got one, and unfortunately, my reaction to this figure is mixed as well.

It looks like Hasbro is trying to get all of the main COBRA hierarchy released as quickly as possible. COBRA Commander and Dr. Mindbender hit us in Wave 1, and here we are with Destro and the Baroness already. Zartan is coming for Wave 3, so our new COBRA's in charge are making their appearences known pretty darn quick, which isn't a bad thing.

But did Hasbro hit a home run with this version of Destro, like they did with the Wave 7 one? Well...no, not really, although the figure isn't that bad.

With this version of Destro, Hasbro went with a "European Dictator" look with his collared jacket and jackboots, and the look really does work for him. The mold is broad-shouldered and impressive. The mold is simplicity itself, with a normally designed jacket and pants set, with simple pockets, buttons and other pouches.

His pants are nicely designed, as are his elbow-length gloves, and the boots look really nice, definitely bringing back some inspiration from Western Europe. All of this makes sense with Destro's Scottish heritage, and this look suits him well, making him ready for action, but still maintaining a somewhat "Field General" type of look.

Unfortunately, though, something about the mold just doesn't quite come together, and I think it's only because of his head. The head and neck don't fit quite right into the torso from what I can tell, so his neck looks abnormally long, which really brings out the tinyness of his head. This really brings down the overall look of the figure considerably, and I am going to try hard to alter the head to look a little bit better. He looks a little rediculous, which takes a LOT away from Destro's imposing personallity, and as such, I can't find myself using this figure quite yet.

As for his color scheme- Destro has always been about the blacks and reds, so this gray coat is a bit of a departure. It still works, and is a nice, dull gray color. The familiar black look is relegated to his pants and boots, and we've got some burgandy beltstraps and undershirt, so the red squeezes itself in here as well.

There were thoughts that this figure might have a gold-plated helmet, similar to the '88 version, but this isn't the case, it's still silver and pretty much identical to the Wave 7 release.

There isn't a whole lot to talk about here. Destro is one of the few figures of the wave who actually didn't get a new, unique weapon. He has the shotgun he came with in Wave 7, which suits me, because it's a terrific weapon, but beyond that, he comes with two of those syringe/flare guns that the medics usually get. Just plain bizarre accessory choice there, but that's one of Hasbro's trademarks, I suppose.

A very solid Destro that is hampered by his "pinhead syndrome" which is emphasized by his long neck. The neck doesn't fit right into the torso, and cannot even pivot, so some serious altering will need to be done.

With a head swap or adjustment, this figure could be terrific, but as such, is only somewhat befitting one of my favorite COBRA characters. He doesn't quite come together, but hopefully a few moments with my dremel will take care of that. We shall see.

Not a bad figure by any stretch, but the fact that he comes with Kamakura is a big downside, and this head problem will only convince people not to pick up this pack. 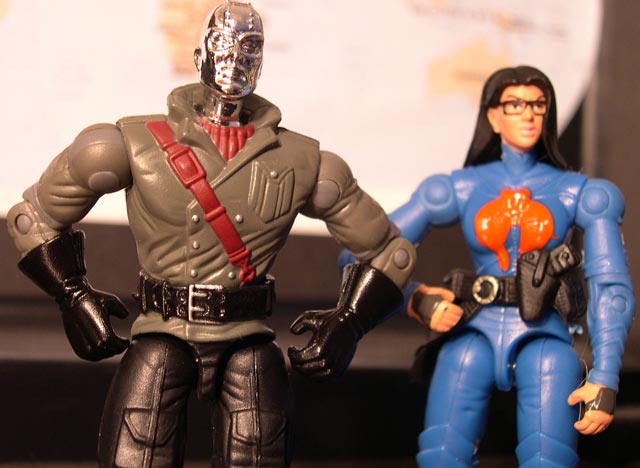