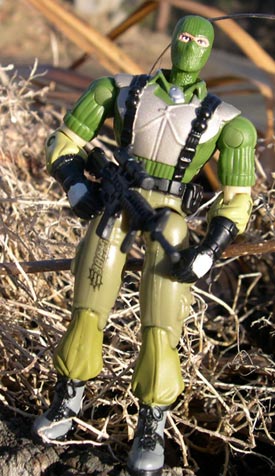 Well, anyone who has read my site for a while, or who has seen some of my online commentaries knows that I have an affinity for toys that get accurately represented in forms of G.I. Joe media.

I love seeing my toys come to life in cartoons and comics, and inversely, I love owning plastic versions of characters I see come to life on the small screen.

That is a big draw for me with this Beachhead figure. The Beachhead we saw in Spy Troops: The Movie was a very different Beachhead than we're all used to. Instead of the grizzled Army Ranger we got a relatively young surfer-dude in a completely different outfit. The attitude and character did not impress me at all, but I really liked the outfit and wished we could get something like it in plastic form.

Well it took a few months, but here it is, a Beachhead that looks like the concept art and Spy Troops character we've been seeing for a while. It's a pretty different Beachhead than we're all used to, but it has it's own pluses and minuses.

The figure mold, all in all, takes some serious inspiration from past versions of Beachhead, but spice it up a bit with a slightly more plain, animated style. Instead of an ammo-carrying flak vest, he has some simple metal chestplate armor. He has his familiar knitted skimask which is trademark Beachhead, and his cool knitted sweater covers up what looks like a baggy sweatshirt. His long gloves look pretty cool, and his equally baggy pants have some interesting detail without being straight-up military.

The mold is kind of tough to get my head around. It's definitely stylized like the Spy Troops cartoon, using that as a solid foundation. It's simplicity itself, with plain uniform design and without an abundance of over-exaggerated detailing. It's just a fun figure, which is plain and pretty interesting to use.

The paint apps are lifted from Spy Troops, as was the overall mold, with different shades of greens, tans and grays. All of the colors mesh together very well, and compliment themselves and each other nicely. He works as a jungle trooper/Army Ranger as he should, but also looks to be comfortable out of action, either training the troops or being a jerk in G.I. Joe HQ.

All in all, the colors are nicely muted, but some different shades still make the figure interesting.

Beachhead's accessories are pretty sparse. He does come with a very cool M-4 carbine, the same one that Duke came with, but for some odd reason also comes with a snake knife like The Baroness. It doesn't really suit him, and I'll probably save it for someone on the other side of the fence.

My enjoyment of seeing the Spy Troops Beachhead in plastic form may be twisting my thoughts of this figure, I'm not really sure. I find myself really liking this version of Beachhead, even if he does seem like "Beachhead light" without a lot of intricate detail and rugged styling. He's a pretty plain figure, but a pretty fun figure like I've said, and I think I might use this as a new version of the same old Beachhead in my universe. He brings some new stuff to the table, and looks nice and different, and overall, I'm happy with him. 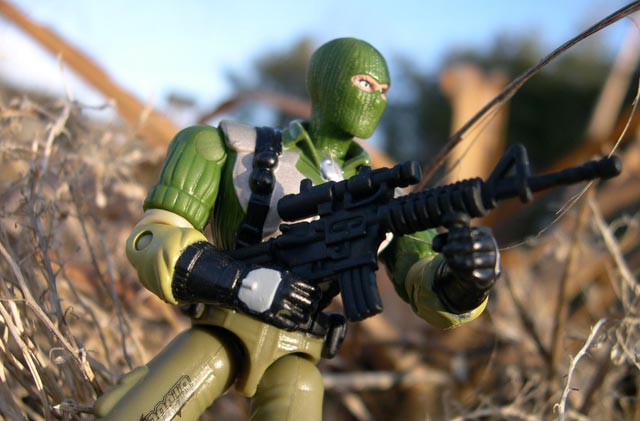 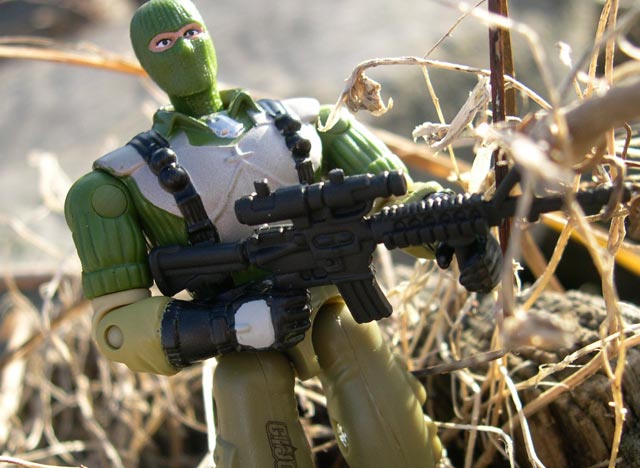