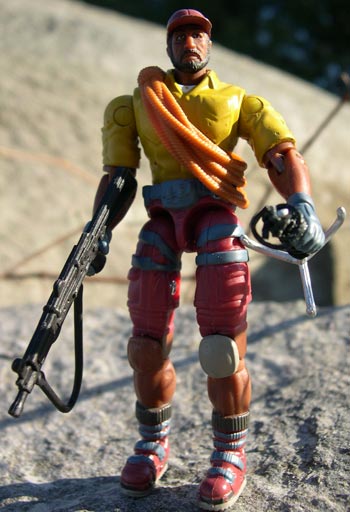 When we first saw this Wave listed, everyone was wondering just who "Alpine Summit" might be. Was he Alpine, or some new character altogether?

Well, we've got our answer, and not only that, but Hasbro managed to get Alpine's trademark back, and a new figure made of everyone's favorite mountain climber.

So, how is this new Alpine? Mold-wise he isn't too bad, color-wise he needs some serious work. He looks more like a recreational extreme-sportsman than a military mountaineer in both look and color, which is somewhat unfortunate.

I actually like this mold quite a bit. It's a simple mold, using the Built To Rule Duke as a foundation. It works very well as a mountain climber, but not necessarily as a military climber.

His shirt is basic and simple, just a plain khaki shirt with pockets and realistic wrinkles. He's got short sleeves and nicely molded gloves, and his belt is pretty intricately detailed with a hammer and carabeeners for rapelling.

His legs look nice as well, with some cool strap detailing on his thighs and nicely patterned kneepads. His boots look great as well, and work well for mountain climbing or military combat. But it all comes together a little too casual. His legs being molded as shorts instead of pants makes a big difference to me, and takes away somewhat from his purpose as a soldier. He just looks too casual.

This is another downside to the figure. When we first saw pictures, his colors seemed obnoxiously bright and not soldier-friendly. Subsequent pictures looked a little more appealing, but in actuallity, Alpine really does wear a bright yellow shirt and pinkish-purple shorts.

As I've said several times, I like brighter, unusual colors, but it just does not work in this case. He is about as anti-camouflage as you can get, and these colors matching up with his casual-look mold, just takes away from the figure and doesn't make him trooper material. I think with a serious repaint, this figure could be pretty cool, but as he is, he just falls short in a few key points.

This is at least one part where Alpine shines. His accessories are pretty nice and effective for what a mountain climber should be using. He has a molded plastic rope which straps over his chest and looks very cool. He also has the grappling hook and string that came with Sgt. Hacker originally. He has Big Bear's machine gun w/ shoulder strap so he can carry that as he climbs, too. Overall, he comes with some great, useful accessories, which is crucial for a figure of this type.

I'm glad this figure comes with Swamp Rat, so I'll be ending up with a few of him. He's got some useful parts for customizing, and I think I'll be breaking out the paint brush to try and spice this figure up. Painting some pants and long sleeves on him, plus giving him some darker colors, I think will make a world of difference. the mold looks neat, and is very "playable". I can just pick him up and move him around and play without too many big, clunky parts getting in the way. But as his specialty, he just doesn't work real well, but he does at least have some room for alterations. 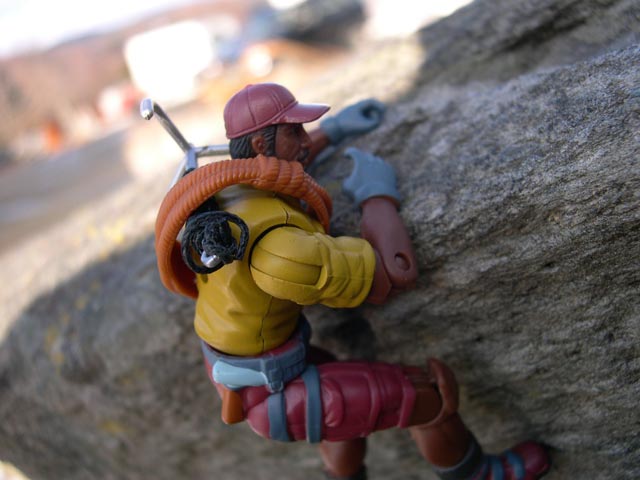 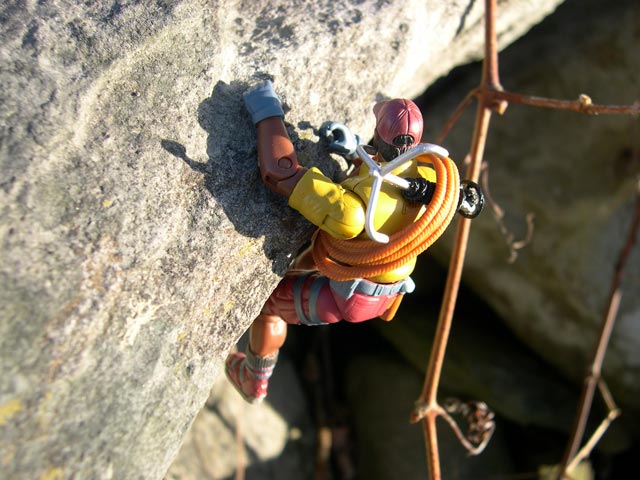 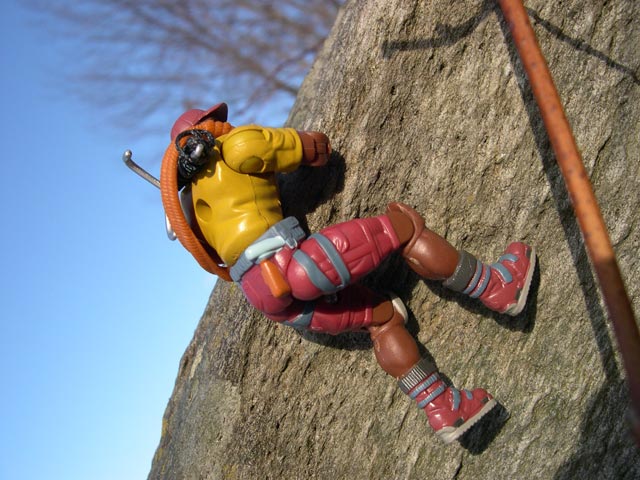 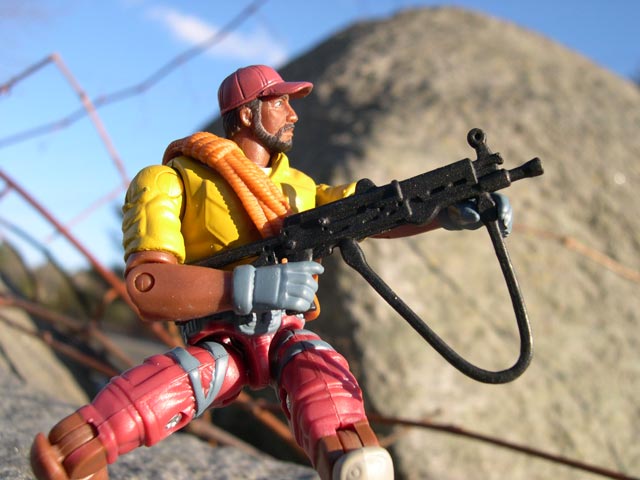