At the same time we saw concept art for the Alley-Viper, we also saw the art for this figure as well. While the A-V was a nice dark COBRA blue, everyone was surprised at the shade of the Viper, having an obvious Crimson hue. At the time we were told that these color changes were purposeful and that there was a "reason" for his change of color.

To this day I'm still not sure what the reasoning is, but I do like this color shade...of this, though, I am 100% certain that I am in the vast minority. 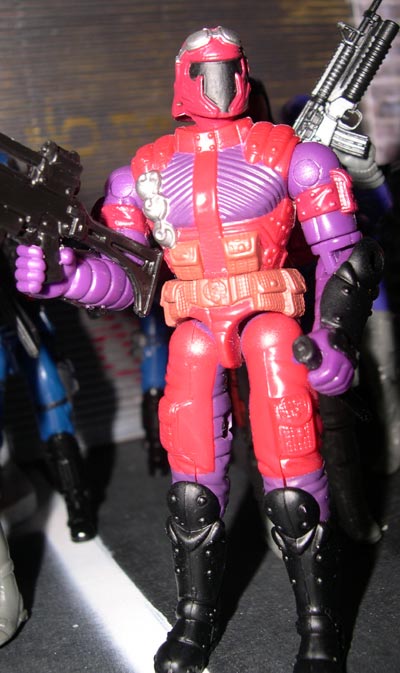 Just like I'm not exactly sure why I don't like the Alley-Viper, I'm not really certain why the Viper figure appeals to me so much. His mold is just as busy as his sub-standard pack-mate, and the color choices are even more bizarre.

But...everything along these lines that hurts the Alley-Viper enhances the Viper and I really like the end-result of this new figure.

As much of a part of the G.I. Joe mythos that the standard Viper is, I'm quite surprised that there haven't been more different molds of the venerable COBRA Infantryman. His 1986 mold is famous for it's near-perfection in every regard, the same way that the '94 version is infamous for a lack of it. But every Viper figure since then has been merely a frankensteined repaint, some of them okay, but many of them not worth mentioning.

I'm one of the minority of Joefans out there who actually LIKE the '94 Viper, and maybe it's that enjoyment of quirky figures that make me like this figure as well, but whatever the case, this is a great update to the COBRA trooper, and I'm sure once he gets repainted a few times, more fans will be endeared to the mold.

The first, most striking thing about this figure is the head sculpt. Quite obviously based on the '86 viper's helmet/faceplate combination, Hasbro took it to the next level and gave the helmet some great flair and added some cool different shapes to the the area where the faceplate meets the helmet. Gives it a great snake-like motif and a nice different pattern where they could have easily just left a straight line. Instead of the standard silver faceplate, this one is black, and I think it looks absolutely killer; a great different color that really works.

This figure also has a turtleneck-like upper torso, but this one does not restrict movement at all, and the Viper is fully poseable and movable. His shoulders are broad and nicely adorned with padding and pouches, but not overloaded. The chest padding is a very cool, intricate ribbed design, flawlessly mixed in with a cloth/rubber /metal overlay that doesn't look that realistic, but looks very cool. It would definitely appear that this Viper can take a few big shots to the chest and come back fighting. Pouches and reinforcement litter his torso, but in a way that does not impede movement like with the Alley-Viper.

His arms are another nice, different pattern and color combination, continuing on with the heavy-armor theme, and ending with some nasty looking arm/elbow guards that look very cool. It would also appear that this is the first Viper since 1994 to actually be wearing gloves!

His pants are of a similar pattern as his arms, and work equally well, with a nice mixture of uniform and protective padding which blends well and does not bother the mold of poseability of the figure. His angled boots and kneepads are a terrific finishing touch and I fear for any G.I. Joe member that gets booted with them!

Now...what about the controversial part of this figure? His colors.

Well, everyone knows I'm a fan of whacky color schemes. I like my blues, dark reds and blacks as much as the next guy, but as long as it's not too out of control, I have no issues with some purples and brighter crimsons, and the two primary shades here do not bother me at all. I love the red that they used as the base color of the mold. It's a nice bright hue, not to be mistaken with the dark red of the Crimson guard, and it actually unifies this Viper figure very well with the other COBRA troops in this assortment. Razorclaw and Sand Scorpion both have a helping of this reddish color in them and it makes them fit together pretty well.

The purple, while a different, and controversial, color I actually enjoy and find no major problems with. Me, being a fan of the '94 Vipers, actually think this color is pretty neat and a nice building block from those figures. This new Viper seems to take bits and pieces from the previous versions and put them all together.

So, you say...I like the colors...yeah, I do. But that's not to say that I wouldn't be very excited if they released this figure in blue and red. I'd be ecstatic. If they put this figure out in a color scheme even closely resembling the '86 Viper, it would be a must buy and a must army-build, not only for me, but for 95% of G.I. Joe fans out there, I have a feeling. If Hasbro could work up a three-pack of these guys, maybe one in a Crimson Viper scheme and two in the classic Viper schemes, they would have a complete hit on their hands, at least with collectors.

All in all, I find myself really liking this Viper figure a LOT. His bulky, but not too bulky mold...his streamlined helmet design and well-protected body armor...everything works great. But, what about the million dollar question?

What the heck is that pod thing that comes with him?!?

I have no idea. :( The packaging does not mention a thing about it, and even though it opens up, there is nothing inside and it seems to serve no purpose whatsoever. I can only imagine it's a pod for the Venom to be stored, or perhaps for the unwilling participants to be housed for their Venom treatment, but whatever the case, it isn't obvious from what I can tell.

Buying this figure and two-pack should be a no-brainer. This figure rocks, and the Alley-Viper is all right, but they're both army builders and fans will eat it up. Don't feel bad if you own a bunch of these...even though I'm sure they'll be repainted to death, the figure is still cool and worth owning, even in purple. 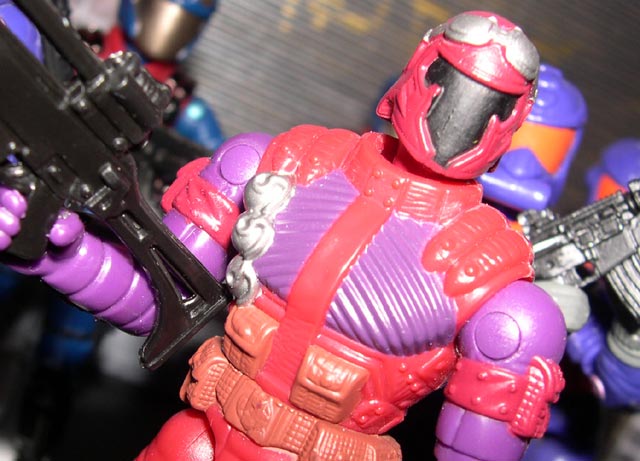 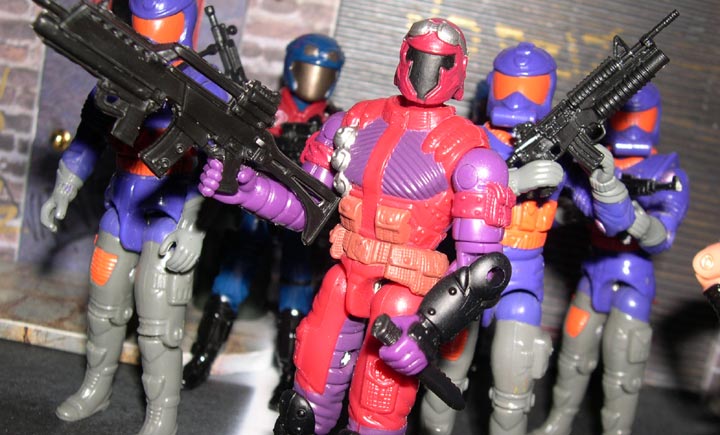 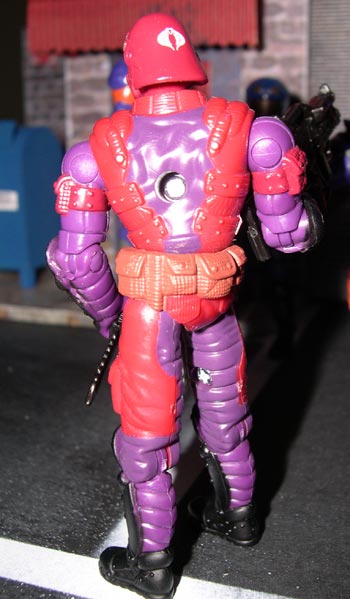 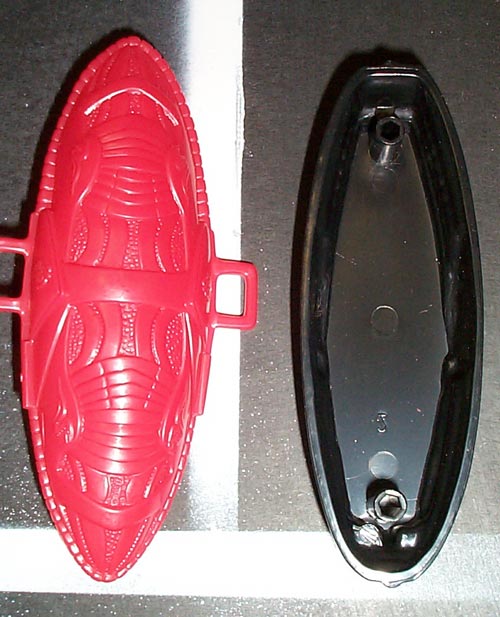 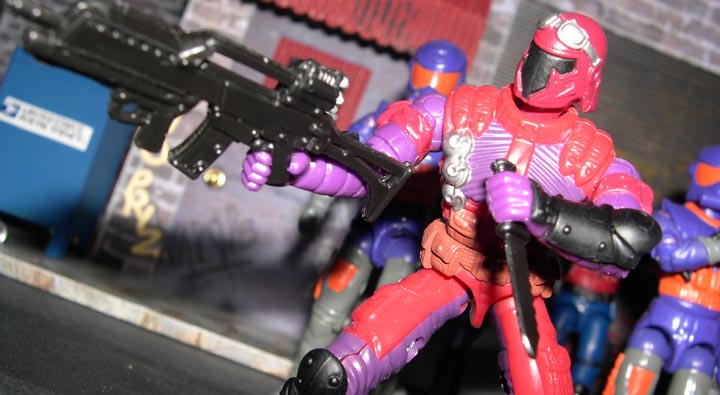