This is easily one of the most difficult reviews I've had to write. I don't think I've ever been so excited for a figure's release only to be so disappointed with the actual outcome. Ever since the first glimpse of the concept art for this figure appeared quite a few months ago the Joe community has been clammoring to see just what the final result would look like in plastic. That amazing work of art looked to be quite possibly the most perfect version of Storm Shadow ever released. The white uniform, a great homage to the original, now famous first mold. The embossed COBRA symbol over his eyes and down his face. The ceremonial, yet effective, very cool martial arts outfit. It could have all been great...

But with one bad decision, Hasbro successfully pissed off 95% of their adult fanbase, alienating hundreds of long-time collectors and customers and quite possibly severely impacting their income from this group of people for months to come. The words "Action Attack" are now as infamous in the cackles of G.I. Joe history as "Eco Warriors", "Ninja Force", and dare I say it- "Manimals". And the words aren't infamous in a good way, that's for sure. 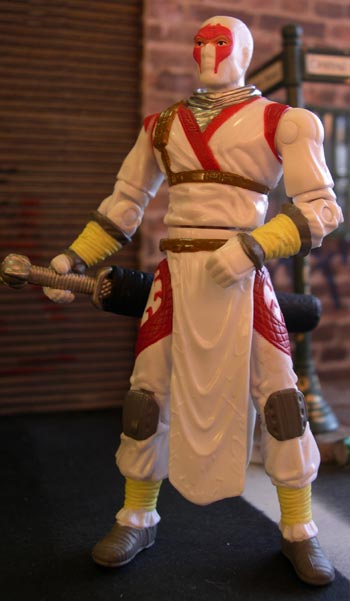 But...certainly a figure that looks that cool on paper, must translate well into plastic, regardless of some shameless spring-loaded gimmick? I mean, come on, there are plenty of spring-loaded toys on the pegs out there that are very cool toys and have excellent sculpting, right? Can't this figure be cool anyway?

Sadly, actually, the answer to this question is yes, the figure looks just as awesome in person and plastic as it did on paper, which is what makes the Action Attack so frustrating.

I look at this figure and I want to scream...or cry...or break something...all at the same time. The mold for this Storm Shadow is quite simply breathtaking. The wrinkled layers of cloth...the excellent ceremonial pattern of the uniform. The little touches like the criss-crossing cloth of the costume over his layered undershirt...the wrapped bandages on his forearms and those awesome, AWEsome dragons on his legs. An absolutely awesome, amazing mold.

Not only this, but the colors are absolutely amazing. The stark white shade that Stormy has always been known for with some terrific red trim on the sleeves, collars and those wicked dragons. Dark gray kneepads which rock, and those off white/yellow bandages on the arms and legs are just great! This figure is just amazing, as I said...beautiful and completely awe-inspiring...

...that is completely and utterly useless except as eye candy. It would be one thing if the "T-Crotch" were the only issue. He has no O-ring, s the waist mobility is sacrificed and he can't move his legs from side to side. That in and of itself is horrible enough...but that's not all of the bad news here.

His right arm has no ball-joint so it can accomodate this Action Attack, and his right elbow joint is so loose he cannot hold his arm in any kind of pose except straight down. Why is that? So when you squeeze his stupid legs, his arm whips around and swings a sword. It drives me to a sort of rage that I can't quite describe. I have no issues or conerns with gimmicks on figures AS LONG AS THEY DON'T INTERFERE WITH THE BASIC MOVEMENT AND PLAYABILITY OF THE FIGURE ITSELF. Especially with G.I. Joe figures, where a main draw to these toys is the number of different positions their articulation allows. It is one of the main things that keeps G.I. Joe separate from the rest of the toy world, and has been a constant for 20+ years.

It wouldn't suck so much if it wasn't Storm Shadow, and if the figure wasn't so friggen cool. But the fact that the best Storm Shadow to grace store shelves since 1987 is completely ruined by this Action Attack garbage just...well, it makes me very mad, if you can't tell.

It completely bites, too, because the bulk of the rest of Wave 9 is really very cool...and this figure COULD have been the shining star of this wave. Had they not saddled this figure with Action Attack, I think the Joe community as a whole right now would be a much happier place. We could have dealt with that crappy Duke...but this excellent Storm Shadow figure...this cornerstone of G.I. Joe and a figure that could have had such amazing potential. To completely butcher this great figure for such a stupid reason is just...well, it's incomprehensible.

I give Hasbro the benefit of the doubt on a LOT of things, but, man...it's tough to justify this. I can only hope that we see this Action Attack stuff on re-releases or repaints from here on, and that they don't bother to cram them into new sculpt figures that could potentially be amazing. I'd prefer they waste this garbage on repaints personally, rather than completely trash what few new sculpts we get with spring loaded crud.

If this figure had an O-ring and no Action Attack, it would be among the best new sculpt figures to date. Because it has this stuff, it's an outrage, plain and simple.

The two pack has Snake Eyes, which is cool...and this Storm Shadow makes a pretty rockin' statue, but not much else. I'm going to end this review here and now, because I'm drawing up plans on how to possibly turn this travesty into a workable O-ring figure...hopefully someone at Hasbro is doing the same thing. 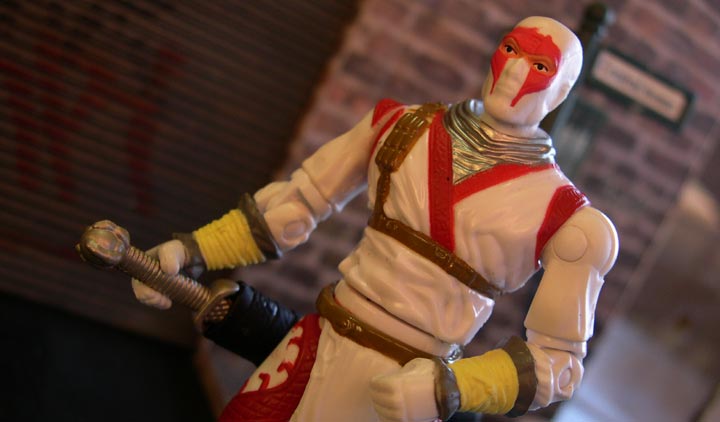 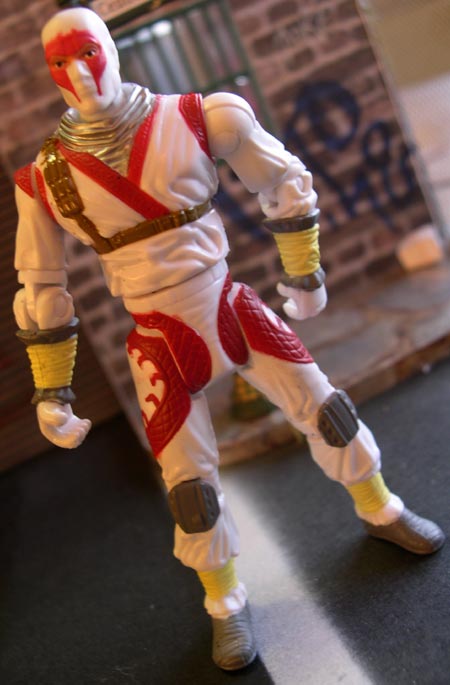