Here's the guy...here's the one that started all the hubbub. The first prototype I picked up and really checked out absolutely dropped my jaw to the floor and blew me away. I haven't been excited about a Snake Eyes figure in a long, long time...well, the time has returned.

I probably don't need to waste a lot of space rambling about how Snake Eyes is the single most defining character in the G.I. Joe mythos, or how he gets the raw deal by some folks, but at the same time is complete overrated.

A conflicted Commando-turned ninja, by now everyone knows his story and I think you either love him or you hate him.

Me? Well, I'm a comic fan, so I'll always have a very soft spot in my heart for ole Snakes. As a kid, Snake Eyes was the MAN. No one could mess with the mute ninja with a scarred face and mysterious past...you just couldn't.

As a young adult, and through the "Snake Eyes: Featuring G.I. Joe" age I got rather disgruntled with our favorite quiet killer, and probably still have a little left over nausea from that period of time. Which is probably a good reason why he is not showcased often in my Dio-stories. Actually he has NEVER been showcased in my Dio-stories. The reason? He's done everything and everything has been done to him already...what more can I explore? Plus, there are a lot more characters for me to have fun with.

Everyone is questioning these days wheteher or not Hasbro actually is trending towards the"standard buck" they couldn't stop talking about at the convention. Regardless of how things look with the debut of Action Attack, I really think that they are, personally.

I just ask that you check out your COBRA Commander...your Destro (Wave 7), Dr. Mindbender (Wave 9), and Snake Eyes (Wave 9). These figures all look very similar and could easily have been built off the same standard buck. Heights are in line, legs aren't all different lengths, and they all have fairly slim shoulders...also, check the hands, and you'll see what appears to be a throwback to our old favorite "C-hands". Perhaps I'm reading too much into it, and maybe I'm completely off-track, but it was the first thing that popped into my head when I had these figures together.

Everyone gushed about how wonderful the Wave 3 Snake Eyes was. He was the uber-Commando, littered with pouches, holsters, weapons, and accessories, and also with several added points of articulation to make him the most bada$$ ninja-commando the world had ever seen. And yeah, he looked cool...problem is, with all of that stuff all over him, you could barely move him! Since my primary love of G.I. Joe figures is to pose them realistically and take pictures of them, this was a major detractor. A detractor that the Wave 9 Snake Eyes simply does not have.

This figure is slim and mobile with a small assortment of pouches, straps and other goodies, but not overloaded with them, and is completely playable, which is an important aspect of a figure, especially when he's supposed to be a ninja. The base uniform for Snake Eyes is a very interesting design, almost looking like a monk's dress buttoned down the front with belts and straps over it to give it a more military style. I don't know, something about that ancient Chinese-traditional dress shirt just strikes me as very, very cool...it takes some talent to come up with a little touch like that.

The rest of the mold is smooth and sleek, his arms wrapped in bandages as they should be, which looks very cool along with the rest of the package. His legs have a simple holster on one side and a device on the other, but nothing too large and cumbersome to block movement, and I just love that little pair of grenades on his left hip. Very, very cool. This Snake Eyes can crouch in the bush and flip through the air gracefully and with full range of movement. These are very important aspects to me.

His colors are also interesting. A dark, dull gray shade similar to the original color of the Wave 3 Snake Eyes, with some silvery highlights along with the black belts and bandages. His boots are a darker shade of gray, which looks equally cool and I can't get over how nicely all of these darker colors go well together.

I am somewhat dismayed, though. The concept art for the Snake Eyes figure had an incredibly cool facemask on it, layered over the regular cloth mask, and I was very much hoping that neat little detail would make it to the figure, but it's not to be. Perhaps a future version of the mute Commando will have that awesome feature, but for now, I'm just happy with this figure.

This two-pack, in spite of the Action Attack Storm Shadow inside, is definitely worth a purchase. Snakes is a terrific all around figure, and even with a lack of mobility, Stormy is a very neat figure to look at, but sadly not to use. :( 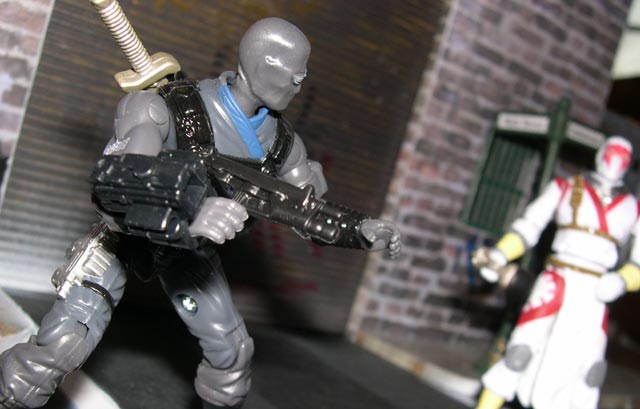 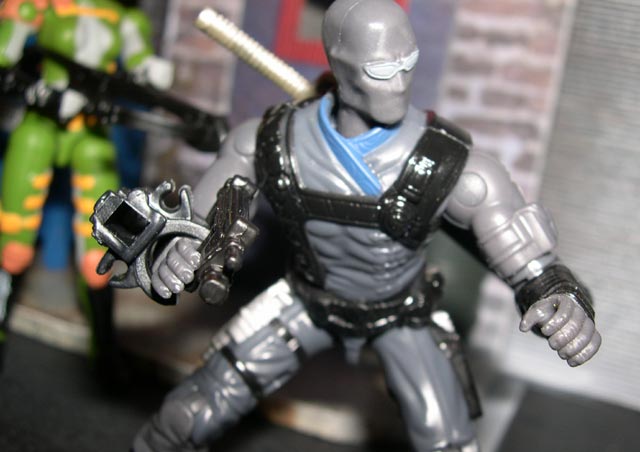 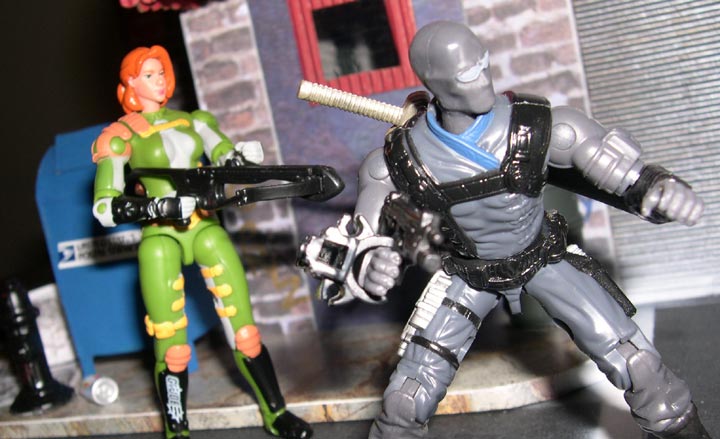