So here we are...the first real "Venom" figure reviewed. Thanks to his filecard, I now know exactly what's going on with this whole Venom thing...so what do I think of it in general?

Don't shoot me, but I kinda dig it. Basically... (look out, SPOILERS AHEAD!!!) COBRA is capturing civilions to use as test subjects for their Venom procedures, and using them to perfect the process, they then start using their own troops, splicing animal DNA with human and increasing their already well-trained troops' capabilities. I actually really love the concept of COBRA troops beefed up with animal DNA to be ruthless, more powerful soldiers, and Sand Scorpion is the perfect definition of this. 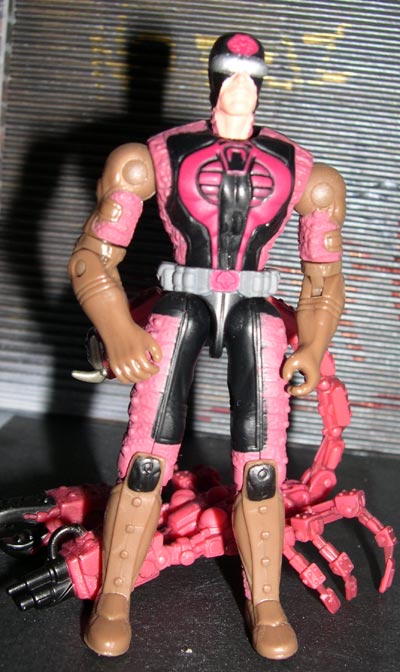 According to the filecard, Sand Scorpions are COBRA Sand Vipers imbued with Scorpion DNA to be the perfect desert troopers. They even have "gills" of a sort so they can stay buried under the sand until the perfect time comes to strike. I think it's a very cool concept, and Sand Scorpion is a terrific first foray into the whole V-Troop phenomenon.

First of all, according to the mini-comic, it looks like the Sand Scorpion has an actual claw for one hand, but thankfully Hasbro didn't mold one, instead choosing to use a robot scorpion drone (who is VERY cool) who can clip his claw-arm onto the Sand Scorpions', which is a terrific idea, in my opinion. That way people who want him to be as he was meant to be can use the claw, but those who don't can just leave it on his metal pet. While I like the idea of troops with animal abilities, I think I can do wthout animal parts a permenant weapon affixed on to the figure. If Hasbro can continue to find a way to make their figures have them, but still keep them separate, I think everyone will be happy.

As for the figure itself, I am quite happy with how it turned out. His head sculpt is very reminscent of the Wave 8 Pit-Viper, which is a definite good thing, and there are some great little details on there that it's tough to see from these pictures. His goggles are slightly cracked, and his face even looks a little scarred up. Very tough, interesting look to him.

His overall proportions are very nice; he has a slim build and is a very commando-looking figure which is very cool, and his mold is just chock-full of interesting details and cool, but different additions. His chest his obviously the highlight of this figure, with a rubberized body armor over an almost scaley surface, then finally covered with a wicked looking COBRA symbol, covering his entire chest. The logo is even embossed to give some extra detail to the figure, and it looks terrific.

His arms are fairly detail-free, but still look cool, with those interesting scales over his biceps and cool metallic looking gloves, which match the boots he wears as well. His lower half is an interesting combination of suit and scales, with the metallic boots complete with bolts and small black kneepads.

The colors are completely different, yet still manage to come together very well. From dark black to an odd red shade, and right down to the odd dull brown of the arms and legs, this figure, even with such different colors, all comes together perfectly. And even though he's obviously meant for desert warfare primarilly, his colors don't limit him to that, and I could definitely see him being used in a wealth of other capacities.

But I'd say one of the cooler parts of this figure would have to be his robotic "drone". The scorpion has movable legs, tail and arms, and his arm attachments come off to clip onto Sand Scorpion's arms, giving him a claw weapon and cool looking firearm as well. Then the rest of the scorpion hooks on his back, and the tail moves up to be an almost shoulder mounted weapon to go along with the scorpion's arms, which also could serve that purpose.

I really can't explain the whole reasoning, but I really love this figure. From the slim, but effective build to all of the intricate detailing, and even going to the concept behind the figure, the Sand Scorpion is a fun character to own and will be someone I troop build slightly. He is going to be an uber-commando, genetically engineered for combat assault, and used for a very particular purpose. In the mini-comic they are a little more engineered than I would have them be (actually drilling into the sand to wait in ambush for the Patriot Grizzly) but overall it's a cool figure and a great new trooper. Have no fears about picking this two pack up, as Scarlett is pretty decent and this figure is great. 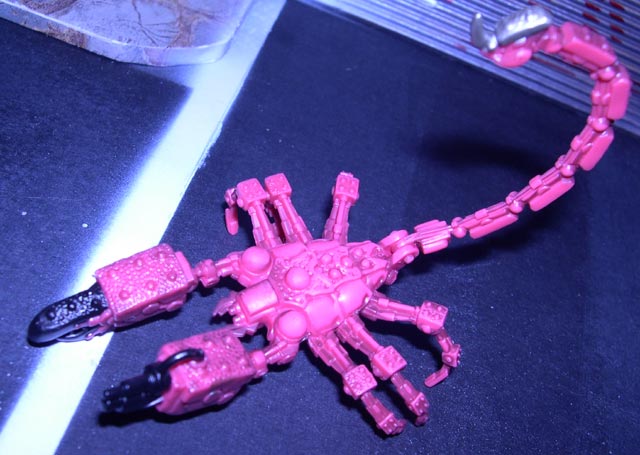 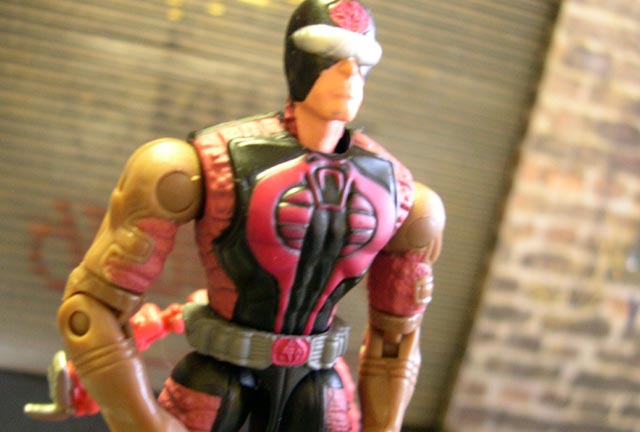