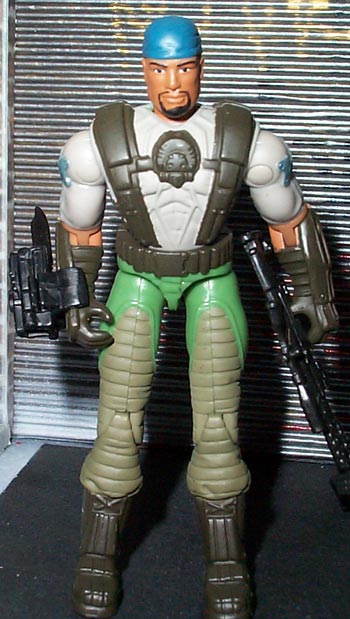 Well there isn't really much to cover with this guy. He's basically the Wave 8 Heavy Duty repainted in a more urban paint scheme, and painted to look more like he looks in the Spy Troops movie.

Really, he's okay either way. Like I mentioned with Scarlett, some of these molds are gearing more towards the super hero than the military, and this figure definitely shows that to be the case.

An almost "Cable-like" appearence, Heavy Duty has been consistently featured since Wave 1, and has come a long way since then, to be honest. His head sculpt is terrific, and while his mold is less military, it is still very cool.

The sleek, rubberized body suit with nice shoulder pads/chest straps and cool padding on the legs, all complimented by those big metal boots and arm-guards. Heavy Duty has become less and less of a soldier over the past year or so, but I think he still looks cool, and I will still continue to use him, even though I do like Roadblock more.

Surprisingly this Heavy Duty does not come with the trademark gatling gun he and his cousin have been coming with since Wave 6, instead now being outfitted with Blackout and Wide Scope's sniper rifle and wrist communicator. This is fine with me,as I se Heavy Duty of a more all-purpose trooper, being a Jack of all Trades infantry hack instead of just the heavy machine gunner.

These colors compliment the character well, too, I suppose, putting him more in an urban environment, which makes sense to me.

All in all, this Heavy Duty is a fine update...not one that's needed, but I guess if they need to repaint him, this shade is as good as any, and I suppose they'll probably call him Night Force Heavy Duty or something. Regardless, it's an okay figure, but comes with the very cool Razorclaw, so I'm sure some folks will end up with him in their Joe team, even though they don't like him a whole lot. 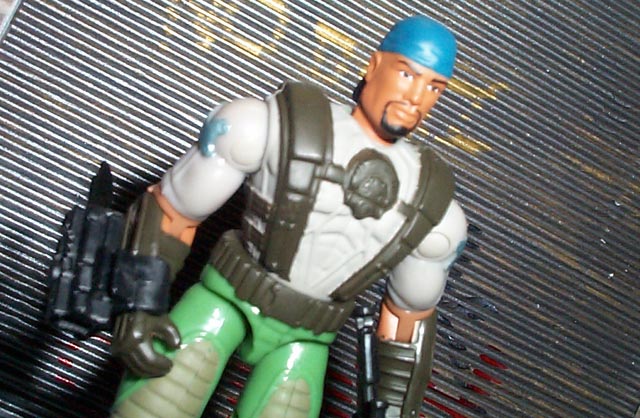