Without a doubt, the most controversial wave since Wave 1 of G.I. Joe Vs. COBRA, Valor Vs. Venom has landed, but did it land with a bang or a whimper?

No one will dispute that the new line landed with a bang, resonating throughout the entire online Joe community, and again creating division amongst fans, who considering their common ties should really just agree to disagree and move on. Whether it's the questionable choice of gene-splicing and animal genetics-based storylines, or the new Action Attack, there are plenty of things for long-time Joefans to hate here, and to be brutally honest, this figure right here is on top of the list. And you know what? He deserves to be. 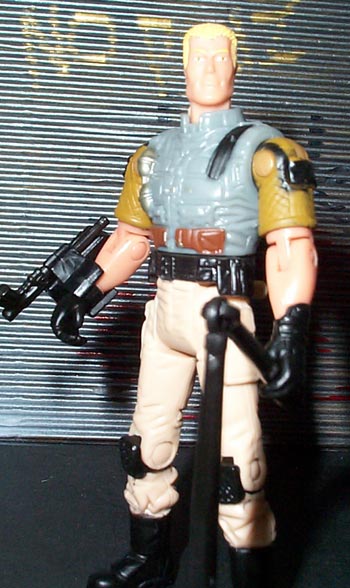 This figure is horrible. Just completely and absolutely putrid. It starts with the T-Crotch design, creating an oddly shaped mold and overly blocky appearence, but just goes south from there.

The head sculpt is actually somewhat decent. It looks like Duke and resembles that the familar Top Kick of the G.I. Joe team should look like. But from the next down, this Top Sergeant should be retired immediately. I cannot even conceive how a child could own this figure and be proud of this version of Duke. He is a complete mismatch to every other JvC, RAH or VvV figure out there and doesn't work in any possible sense of the word.

His colors aren't that bad, I suppose, on their own. The gray flak vest, tan shirt and tan pants can be accurate colors for a number of different environments, combined all together, these shades make no sense whatsoever. He's like a patchwork figure, slapped together, and slapped together sloppily at that. I am honestly ashamed to call this figure a G.I. Joe figure.

But as if this wasn't all bad enough...ole Sergeant Duke here comes with his own huge button on his back, and when you press it, the spring action maneuver forces this poor sap to smack himself silly with his nunchuks! Never mind the fact that Duke shouldn't come with nunchuks to begin with, but his "nunchuk swinging action" isn't a threat to anyone except his own noggin. I think Dukey needs some more time with Snake Eyes in the sparring ring...maybe that's why he can't hit the broad side of the barn with his sticks and chains.

Now besides these nunchuks o' death, Duke comes with a very strange contraption that snaps on his wrist. This strange device is apparently meant to hold all of the extra weapons that Duke doesn't come with. :/ According to the package instructions, these wrist devices are communication instruments that also double as holders for weapons. Very, VERY small weapons, evidently.

Well, it would appear my Wave 9 reviews are not off to a pretty start. This figure is a hunk of garbage, and it takes a lot for me to say that about a Joe toy. Considering he's packaged with a black and red repaint of COBRA Commander, this pack can be skipped with absolutely no regret whatsoever. I would suggest, though, if you're so inclined...buy the pack, keep the pretty cool CC figure, and use Duke to participate in JoeCustoms' "Send Back the Action Attack" campaign. Hit the link and check the message board to find out more. 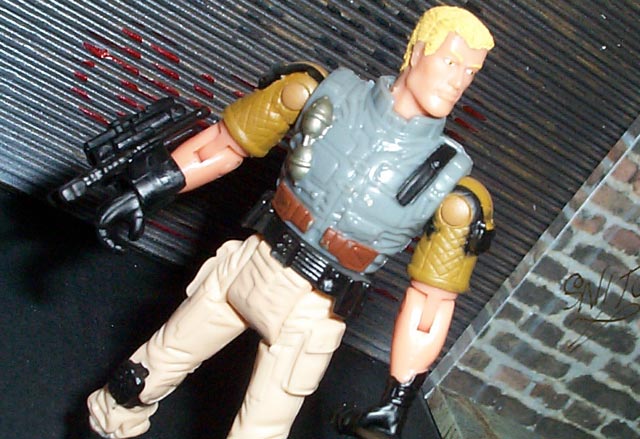